If your cat seems keen on the gravy in its food, and nothing else, you may be wondering why and what you should do…

Why does my cat only lick the gravy from his food?

That’s the tastiest part for some cats, as a lot of flavor and fats are at their highest concentration in that jelly mass. It looks a little gross to us, but for your cat, it’s the yummiest bit. To understand your cat’s love of the stuff, it’s best to think about what it is (instead of how unpleasant it looks).

In some cat foods, that gravy is the by-product of added thickeners that congeals along with broth and fats to form that ‘gravy’ that your cat is fond of. In other foods, it’s more natural gelatin, which is a combination of broth, fat, and ground-up bone and marrow forming a natural suspension or ‘colloid’.

Think of it as ‘meat Jell-O’, created when the newly-prepared cat food cools, and you’re on the right track. That said, there is also a possibility that your cat’s teeth may be hurting, and you can rule this out by feeding them a little dry food and seeing how they handle it.

If your cat tends to pick up individual kernels carefully, then this is a sign that they may have a little tooth decay or infection and you should get the vet involved.

Contents show
1 Why does my cat only lick the gravy from his food?
2 Can you get cat food without gravy?
3 Is gravy good for cats?
4 Can cats live on gravy?
5 How can I prevent cats from only licking the gravy?
5.1 Change the brand
5.2 Change the flavor
5.3 Mix food with homemade chicken & broth
6 Does cat food have vegetable protein as well as gravy?
7 Could dental problems cause a cat to just eat gravy?

Can you get cat food without gravy? 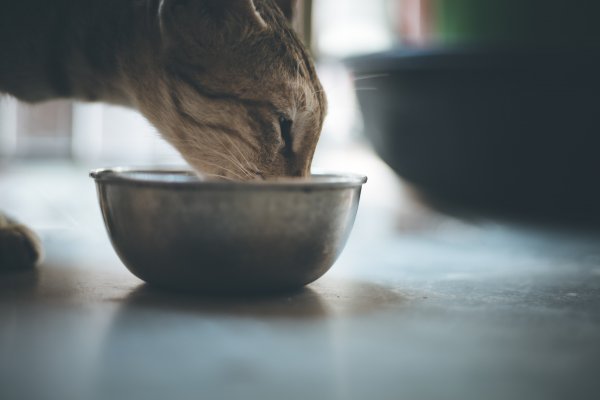 A brown cat eating food from a bowl.

You can try different brands, and some will have less than others, but for the most part, it’s unavoidable as it’s a natural part of the process of making cat food. Some cat foods offer alternative thickeners, such as Carrageenan, which look a bit less ‘slimy’ but they aren’t always a desirable alternative.

With Carrageenan, for instance, red seaweed is being used as a thickener, but this has potential carcinogenic qualities, and some worry that this could contribute to kitty cancers down the line. Your best bet for reducing the gel content is just going to be spooning off what you can and mixing the rest well.

Is gravy good for cats?

The gravy gel in the cat food isn’t going to harm your cat and should be part of the nutritional labeling on the can. Remember, it’s just gelatin of broth, bones, and fats, and all of the ingredients have been safety tested in advance when that gelatin is formed with the help of artificial additives.

As far as human gravy recipes go, if you make some that leave out spices other than perhaps a little flour, oil, and broth, it’s still a bit on the fatty side, so it’s probably best not to give your cat more than a spoonful with their meal as a special treat.

Can cats live on gravy?

No, they can’t, any more than you could live on a soup of Jell-O made of broth and bits of fat. While it’s certainly tasty from their point of view, that jelly gravy is all flavor and no function – having very little to offer in the way of nutrition.

How can I prevent cats from only licking the gravy?

While the easiest way to accomplish this is to mix it up well, there are certainly a couple of other strategies that can help if your cat has a knack for finding all of the gravy and then padding off into the sunset. Below you’ll find a couple of methods that can help to minimize gravy-grabbing in your cat.

Some brands add artificial gelatin powders into their food, while others rely on the bone content that is already present in the ground-up meats that make up most of the meal. With the second kind, you’ll get less gravy, so try picking up a few new brands to give a ‘test run’ over the next week.

Try out some different available flavors for your cat’s food and you might see an appreciable difference in the gravies. Some fish flavors, for instance, are quite a bit leaner, and as such, they will have gravy with a lower fat content which will appear quite minimal next to a fattier beef variety.

Some chicken will be less fatty than others, so try some chicken varieties as well if your cat doesn’t like the fish much. You’ll be surprised at how much of a difference it can make, but you may need to try out a few before you find some with a significant difference.

For best results, try a few cans of higher-end cat foods and make sure that you are comparing the same can sizes, to get a more realistic idea of how much gel to expect by size and brand.

A person cutting a whole roasted chicken on a wooden kitchen counter.

You can also replace that gel with a better alternative, by mixing up a little broth and chicken bits to stir into your cat’s food. Just put the food from the can into a dish, spooning off the gelatin in advance, and replacing it with the good stuff. Your cat will love it and as a bonus, their food will be pleasantly warm as well as tasty.

Does cat food have vegetable protein as well as gravy?

Yes. Some of the oddly textured chunks that you will see in your cat’s food are not meat but textured vegetable protein. This helps to provide a little extra vitamin content, although some clever kitties will notice these and may even eat around them.

It all depends on your cat and how finicky they are, to begin with.

Could dental problems cause a cat to just eat gravy?

Yes, this is possible. When your cat has infected gums or even just a cavity, eating can become painful and your cat may resort to simply licking up what they can to avoid painful chewing. A quick test is to give your cat a couple of treats and watch how they chew them.

If your cat seems to be favoring one side of their mouth, then this could be an indication that they are having dental problems on the other side, and it’s best to get a quick vet checkup to rule this possibility out.