Why Does My Cat Freak Out When I Shower? (+ Solution)

Why does my cat freak out when I shower?

Your cat will freak out when you are in the shower because it is curious and wondering what you are doing. They are also concerned about you in the water because most cats fear it. If this is happening take it as a compliment because your cat obviously cares about you.

Use these to distract your cat while you shower

So, now you know. But, are cats scared of the shower? What can you do to prevent this from happening? Are some cats just obsessed with the shower? Keep reading for these answers, and much more…

Some cats do fear water and it is a common stereotype. However, not all cats feel this way. Some big cats in the wild have no fear of water and can be seen there. Also, some domesticated breeds of cats are happy to go into the water without any problems.

Also, domestic cat’s fear of water is often based on their experiences. If they have had a traumatic experience or witnessed something similar, involving water, they are likely to build fear for it going forward.

For example, if they were forced to bathe and they were scared this could make them have a bad feeling about the shower whenever it is turned on.

Are cats scared of showers? 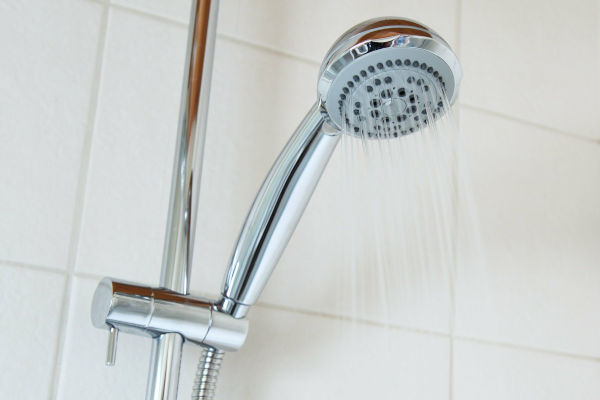 A shower head in a bathroom.

Showers, much like water, scare many cats. Firstly, this could be because of bad experiences from the past, but it could also be a threat to their perfectly groomed fur. Meaning, they do not want the shower water to mess up their coat.

Another factor is the sent, or shall I say lack of scent that a shower offers. Once a cat is soaked in water it may fear losing its scent. And, this is an important part of being a cat. So, if this is the case, the obvious thing to do is ply you with scent right after, right?

How can you prevent your cat from freaking out when you shower?

So, now you understand why your cat may be acting in this way, but what can you do to stop it from happening, going forward? Here are some suggestions:

01. Stop letting it into the bathroom 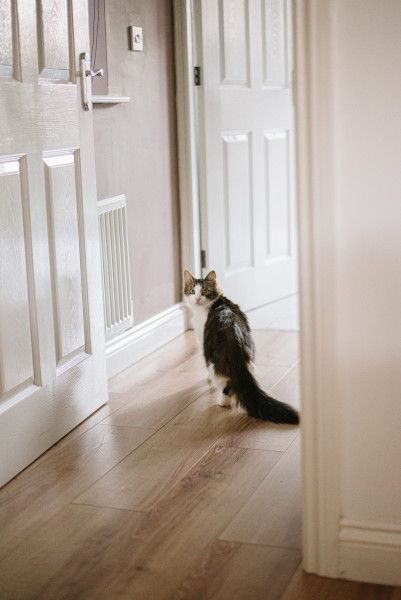 A cat outside of a door.

One of the most obvious, yet effective methods is to just restrict your cat’s access to the bathroom when you shower. It makes sense, if it’s not happy watching you and you feel uneasy, why bother?

However, I understand that is not always feasible. But, where possible you should consider doing this. Bit, be warned the issue could switch from freaking out to meowing outside of the door.

02. Distract your cat with treats

Another alternative to stoping your cat freaking out is using some distraction. One of the simplest ways to do this is to use some treats (Click here to see the reviews, on Amazon #Ad) to keep it distracted. This will keep its focus away from your shower.

However, be warned, one or two treats won’t cut it for most showers. So, you may need a few to keep it occupied. This is mainly effective if you are a fan of short showers. Because long ones will inevitably result in your cat going back to harassing you after it’s done with the treats.

Another option is to distract your cat with some toys (Click here to see the reviews, on Amazon #Ad). These will keep it temporarily pre-occupied while you finish off your shower.

If you get a good toy it will increase the chance of the cat keeping away from the shower for the whole duration. So, interactive toys are great for this type of distraction.

Do some cats wait outside the shower?

Some cats will wait outside the shower for you. This is even more likely if you lock them out of the shower room to stop them freaking out. It will intensify their curiosity.

Another factor is the territory, in your cat’s mind they own the house and you merely serve them so they find a closed-door an insult and will typically wait outside until you open it. The funny thing is when you eventually open it to move to your bedroom they will assume they won the battle.

So, you have to be careful how you deal with this because if it feels that it has won each battle it will just keep doing it over and over again.

Why can some cats be affectionate after you shower?

If you have noticed your cat being affectionate after your shower it is likely down to your scent. Or, lack of scent shall I say. When you leave the shower you have washed away your potent scent that cats take seriously. Therefore it is likely to rub against you to re-apply it immediately after you emerge.

To us humans, this rubbing against us is seen as affection, but to cats, it’s their opportunity to mark you as their property. And, to be honest, it generally works.

Why do some cats guard you when you shower?

Some cats may guard you when you shower because they fear the water and are also conscious that you are vulnerable while you shower in the way. Also, they do not want to miss the opportunity to ply you with their scent the moment you leave the shower.

As mentioned earlier, this is one of the reasons they appear to be affectionate when you finish the shower. A disguised attempt to re-scent you.

Are some cats obsessed with the shower?

Some cats will appear to be obsessed with the shower. This is because they will hang around waiting for you or immediately shower you with love after. However, this is really their need to re-claim you after you have washed off their scent.

Similar to the perceived affection I discussed earlier, they will notice you in the shower and know exactly what’s happening, which is you washing off their beloved scent.

Could some cats damage the shower curtains?

Some cats will damage shower curtains (click here to see why and how to stop this). This depends on the fabric used. For some reason, some cats are obsessed with certain fabric types. I this is happening you will need to consider replacing the curtains.

Should you be concerned that your cat is watching you shower?

If your cat is not being violent after the shower (Click here if it’s biting you) then there is no need to be concerned. It may be annoying but as long as it’s not getting physical it’s not a big deal. However, if it is not acceptable try some of the methods discussed above to stop it from happening.