Why Does My Cat Act Weird When I’m On My Period?

If you have noticed your cat acting weird when you are on your period cycle you may be wondering if this is for real, and if so, why?

Why Does My Cat Act Weird When I’m on My Period?

During your period, cats can smell the change in hormones your body is experiencing which can cause them to act weird around you. Odd behavior in cats can be attributed to stress, and it might be that the new and different smell has them worried something is wrong.

So, now you know. But, are animals attracted to menstrual blood? Do cats know when you are on your period? When do cats start their period? Keep reading for these answers, and much more…

Contents show
1 Why Does My Cat Act Weird When I’m on My Period?
2 Do Cats Know When You’re On Your Period?
3 What Things Do Cats Do When You’re on Your period?
3.1 Should not react in fear or self-defense
4 Are Animals Attracted to Menstrual Blood?
4.1 Iguanas have been known to attack
5 Do Cats Make a Mess When in heat?
6 Do Cats Get Turned on by Humans?
7 Are Cats in Heat Attracted to Human Males?
8 When Do Cats Start Their Period?
9 Why Do Some Cats Attack While You Are on Your period?
10 What Things Can Make Your Cat Act Weird?
10.1 01. Your Cat is Stressed Out or Feels Threatened
10.2 02. Your Cat is Sick
10.3 03. Your Cat is Depressed
10.4 04. Your Cat is Not a People “Person”

Do Cats Know When You’re On Your Period?

Although cats’ keen sense of smell can detect odor and hormones related to menstruation, they don’t know what is happening inside your body. They might find your new scent intriguing but won’t realize its source.

Pets seem to intuitively know if something is wrong or different. In addition to noticing the change in your scent, your cat might sense subtle changes in your behavior or habits during your period. Maybe your mood has changed, or you are sleeping more than usual.

What Things Do Cats Do When You’re on Your period? 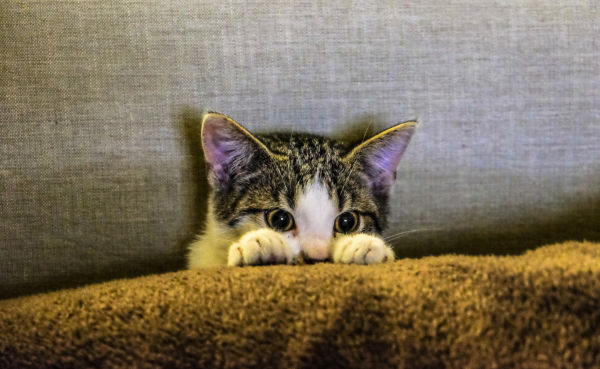 A cat hiding on a sofa.

Cats can become clingier when you are on your period. They might want to snuggle and crawl in your lap more often or rub up against you frequently.

Because the smell associated with menstruating can intrigue them, cats might be more interested in sniffing certain areas of your body. They also might dig through your trash, be intrigued by the feminine products you throw away or crawl through laundry you’ve worn.

Should not react in fear or self-defense

Even if your cat is curious or even concerned about the new smell, he will still know it is you and should not react in fear or self-defense.

If you don’t like your cat’s change in behavior, you can give him extra affection which might help to reassure him that everything is okay. Changes in your cat’s behavior during your period are generally not a cause for concern, although you might find them a bit annoying.

Are Animals Attracted to Menstrual Blood?

A few studies have noted that some animals are attracted to the odor of human menstrual blood. In a study of polar bears, the bears reacted strongly to the scent of used tampons over other items. Black bears, however, show no interest in menstruating women.

Most household pets have little reaction to menstruation, even if they notice it. Dogs and cats often show an interest in the odor associated with menstruation, but this curiosity rarely leads to more than a few information-seeking sniffs. Birds lack the keen sense of smell to notice.

Iguanas have been known to attack

There is one (less common) pet that is an exception to the rule. Iguanas, particularly males, have been known to attack women who are having their periods. This might be because the scent of human menstruation is similar to the scent of a female iguana searching for a mate.

Do Cats Make a Mess When in heat?

A cat in heat might make a mess due to spraying to mark her territory or some light bleeding. Your cat’s increased hormones can cause her behavior to change, and she might be more prone to scratching furniture, knocking things over, or other messy inconveniences.

Give your cat extra toys, blankets, and other items she can scratch or tear up to relieve frustration and aggression. If she is bleeding, it should be light and not cause too many problems. Excessive bleeding can be a sign of another issue.

Do Cats Get Turned on by Humans?

Cats do not get turned on by humans but can develop a strong (non-sexual) attraction to certain people. They can become particularly attached to women and depend on them for their social needs.

Because female owners tend to be more affectionate with their cats, as a study has shown, cats  (both male and female) can seem more interested in the women in their lives.

Are Cats in Heat Attracted to Human Males?

While in heat, cats are not attracted to human males but can become especially affectionate with humans in general. During this time, your cat can become clingier, make strange sounds, and display other behaviors that might not align with her usual disposition.

When Do Cats Start Their Period?

Cats can start their period any time after they reach sexual maturity, which is generally about six months of age. The length of time a cat is in heat is 1-2 weeks, but the period in between cycles is a little less predictable. Most unspayed cats will have several cycles a year.

Cats’ cycles generally occur during the breeding season. This is January through late fall in many places but can vary based on seasonal conditions. Indoor cats may have year-round cycles.

Why Do Some Cats Attack While You Are on Your period? 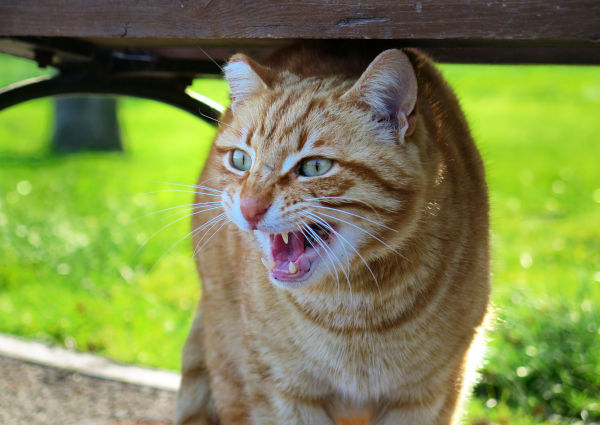 While you are on your period, your cat’s reaction to your scent can seem like she is attacking you. She might jump on you or lunge at you more often, most likely out of curiosity or as an emotional response to your change in smell.

If your cat is being aggressive, don’t try petting or consoling her. This can have the opposite effect and encourage her to attack you more vigorously. Also, petting an aggressive cat can seem like you are rewarding the behavior.

What Things Can Make Your Cat Act Weird?

A cat can act weird if it is not feeling well, is stressed out, or doesn’t like someone, among other reasons. The cause might not be obvious, so if you are concerned it is worth observing your cat more closely to make sure a trip to the vet isn’t warranted.

01. Your Cat is Stressed Out or Feels Threatened

Change can affect your cat in much the same way that it affects you. Moving to a new house, for example, can trigger stress in a cat. When things around him change, your kitty might need some time to adjust.

Another big stressor is the addition of a new cat, which can cause your first cat to become territorial. You can help to ease the tension by giving each cat his own space and redirecting aggressive behaviors from each other to their toys.

Cats react to being sick (how do they react to their owner being sick? click here) much like humans do – they can become lethargic, refuse to eat, sleep more, and have mood changes. If your cat has been vomiting regularly, hasn’t eaten all day, or is exhibiting other unusual behaviors a trip to the vet is probably a good idea.

03. Your Cat is Depressed

If your cat has recently had trauma or major change, he can exhibit some symptoms of depression. You might notice him eating less, making strange sounds, sleeping more often, or acting aloof.

A depressed cat could be reacting to the loss of a loved one or could be sick or injured. If you’re your cat is not showing other signs of physical distress, he will probably perk up with some extra playtime and affection.

Every cat has its own unique personality, and it might be that your kitty has certain people he just doesn’t like. If wants to lie in your best friend’s lap but runs and hides when your brother comes over, it doesn’t necessarily mean anything is wrong.