When Is It Too Late to Allow An Indoor Cat Outside?

If you have an indoor cat you may be wondering if it is too late to expose it to the outdoors.

When is it too late to allow an indoor cat outside?

There is no age limit to let an indoor cat outside. However, some would argue that it may be safer indoors than outdoors due to the dangers. These dangers include attacks from other cats, diseases, unwanted kittens, etc. But, cats adapt to the outdoors well regardless.

So now you know it is not too late. But, are cats happier outside? Is there a minimum age for letting a cat out? What are the disadvantages of letting your cat out? Keep reading for these answers, and so much more…

Contents show
1 When is it too late to allow an indoor cat outside?
2 What do cats do at night outside?
3 Are cats happier outside?
4 Do cats remember where they live?
5 Why is my cat acting weird after going outside?
6 Will my cat come back if I let him outside?
6.1 Make sure your cat has ID
7 Is it bad to have an outside cat?
8 What happens if an indoor cat gets outside?
9 At what age can cats be let out?
10 Should you keep an adopted cat inside at first?
11 What are the disadvantages of letting your cat out?
12 What are the advantages of letting your cat out?

What do cats do at night outside?

When cats are outside at night they will explore, roam around, and hunt. It is better for them at night because there are fewer humans around, quieter and reduced pollution.

Cats can also see well in reduced light. However, this does not mean complete darkness, that is a myth. So roaming around at night carries quite a few advantages.

Are cats happier outside? 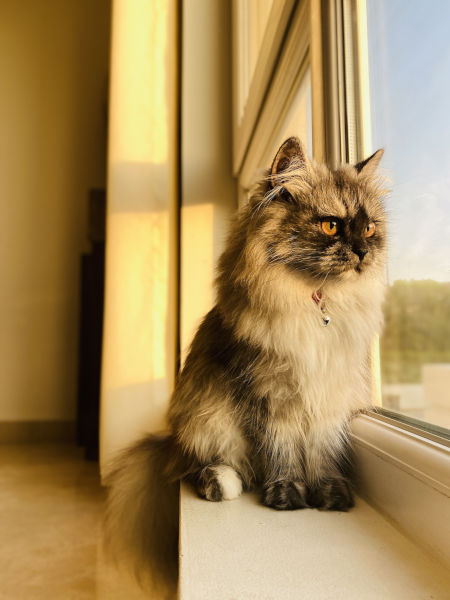 An indoor cat looking outside.

A recent study revealed that indoor cats tend to have a longer lifespan than outdoor cats. And, there is many cases of cats leading happy lives indoors. But, the reality is it depends on the cat. Some cats genuinely enjoy the outdoors.

It comes down to what they are used to. If an indoor cat has never experienced the outdoors and content they may be happier indoors. But, an outdoor cat who is forced to stay indoors is highly likely to be unhappy being stuck indoors.

Do cats remember where they live?

Cats do remember where they live. They do this by associating certain behaviors and actions that trigger their memory. This is typically called associate memory. And, it is not just limited to cats, other animals share this skill.

For example, when you reach for your dry food box and shake it your cat associates that with feeding time. So, even if it’s a different time than usual feeding times they will respond nevertheless. This same memory skill helps them find their way home.

Why is my cat acting weird after going outside?

If you have noticed that your cat is acting differently since it returned home there could be several reasons why this is happening. Such as being chased by another local cat, getting pregnant by another male cat (Click here is your male cat struggles to mate), or it may have picked up an illness.

The best thing to do is to monitor your cat to see how they respond in the next few hours to see which one it could be. If in doubt get your cat checked out with your vet to play it safe. It could be harboring a more serious issue that needs your attention.

Will my cat come back if I let him outside?

Your cat is likely to come back if you let it out. And, it is normal for cat owners to feel this way the first time. One good tactic is to venture outside with your cat first time and leave the door wide open. It will make your cat feel more comfortable and show it that they are welcome back in.

Allowing your cat out for the first time can be nerve-wracking especially if they have been an indoor cat for the majority of their time with you. But, the good thing is many cats do this and return without any problems.

Make sure your cat has ID

However, whatever way you do it make sure your cat has some form of identification. Because, there is a chance they could get lost, get into problems, etc. And, if they are easily identified it can be returned easier.

Is it bad to have an outside cat?

It is not bad to let your cat outside but you do have to understand the risks so you are prepared. As discussed earlier, a study showed that outdoor cats, on average, have a shorter lifespan when compared with indoor cats. This is because they are more susceptible to diseases, injury, etc.

The reality is socially it is more common for people to judge indoor-only cats rather than outdoor cats. Because outdoor cats are the norm. But, there is a growing attitude to keep cats indoors. But, it is a controversial topic with arguments on both sides.

What happens if an indoor cat gets outside?

Indoor cats that have escaped are known to not stray too far. Although you may have a vision of your cat running for the hills, the reality is most indoor cats are not comfortable straying too far. Also, they are more likely to be quiet and hiding away.

The reason for this low profile demeanor is survival. If their surroundings are unknown they are unsure what dangers, predators, etc could be lurking in waiting. So, your perception of an escaped indoor cat could be very different from reality.

At what age can cats be let out?

Cats can go out as kittens but only once they have had their necessary vaccinations. Typically this happens about week 13 of their life. In addition to this, it is important that they are not just vaccinated but clearly identifiable in the event they get lost.

Too many cat owners put off the identification until it’s too late. Even if you plan to keep your cat indoors it’s worth getting its identification sorted ahead of time just in case. This can be a collar with an ID tag, microchipped, or another method.

Should you keep an adopted cat inside at first?

An adopted cat should be kept in at first so that it can get acclimatized to your home. It may seem eager to get out but wait at least a couple of weeks. Also, when you do decide to let it out don’t be alarmed if it jets off and hides, it just wants to scope out the new environment without being seen.

It is better to let it out when dinner time is soon this way you can tempt it back in for feeding. Also, as stated earlier, keep your door open and go out with it the first time to help make it a smooth transition.

What are the disadvantages of letting your cat out?

Letting a cat outside has the following disadvantages: It can get attacked by other cats, get into fights, bring home diseases, get lost, get stolen, get pregnant, etc. In fact, the list is longer but I think you get the idea.

If your cat is not neutered or spayed these risks are increased. Male cats in particular can be quite aggressive and may pick fights for territory especially if they are not neutered.

What are the advantages of letting your cat out?

There are several benefits to letting your cat out as well. This includes more exercise, exposure to nature, keeping themselves naturally entertained, and eliminating out in the wild as nature intended it.

Some cat owners even say that letting your cat out improves them from a psychological standpoint. Which sounds logical, but hard to prove. But either way, it is what nature intended and the way cats were before domestication.

Ultimately it comes down to personal preference on how you choose to look after your cat.