What Do You Do With Injured Mice? (Cat Hunting?)

If you have a pet mouse or are just concerned after seeing one injured, you may be wondering what to do if it is attacked by a cat or another predator.

What do you do with injured mice?

If your cat has injured a mouse and you want to provide the care you need to understand that it is likely to be stressed and traumatized after the attack. You will need to place it in a suitable carrier designed for mice or a home container with suitable breathing holes until you get medical care.

So now you know what to do with the mouse. But, why do cats even chase mice? Do mice play dead to avoid injuries? Do indoor cats hunt mice too? Keep reading for these answers, and so much more…

Why do cats chase mice? 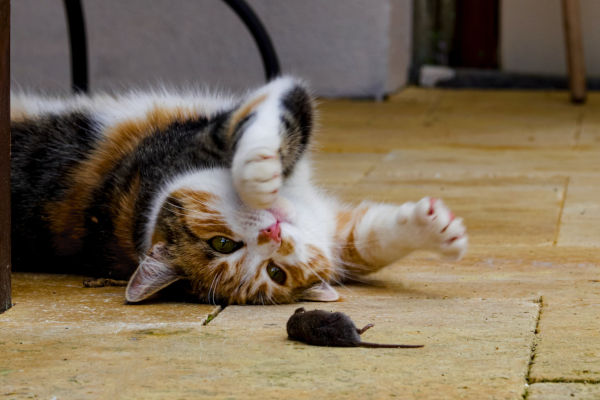 Cat with a mouse.

Cats are naturally attracted to mice because they have a sudden, quick movement that triggers their hunting instinct (click here to see if this cat is the deadliest). Also, a mouse is an appealing protein-rich meal for them which they can find too hard to resist.

If you have wondered about mice and why the stereotype of cats chasing mice comes from now you have an idea of where those come from. It is almost like nature intended cats to prey on mice and it’s the way it is.

Cats do eat mice, they do not just play with them. Domestic cats, especially indoor ones, may have lost their need to hunt and prey for mice as their meals are provided by humans. But, feral cats are born and trained to hunt small animals such as mice as a way of survival.

You may have seen your cat bring in a dead mouse or seen it chasing it around. And, you may have wondered if your cat is just playing with it o rit intended to eat it. So, now you know that they can and do eat mice.

Indoor cats do hunt mice but the reality is they are less likely to see them unless their house has a pest control problem. In the wild feral cats will seek out mice as a food source. And, outdoor cats may find them on their local journeys.

There is a good chance that your cat has never bought home a mouse before. And, this is normal if they are a standard domestic cat. So, if they do ever bring one around it more shocking because it is not the norm.

How do you clean up a mouse after a cat attacks it?

To clean up a mouse after a cat has attacked it should be done with either bleach, which is mixed with water. Or, using some other form of disinfectant. And, if it has affected your laundry items they will need a wash at the highest temperature they can without damaging it.

Mice are known to be unclean animals. In fact, they are regarded as pests unless you have taken one in as a pet. One of the reasons for this is the potential dirt and infection they may be carrying. Hence the reason why it’s important to clean up well.

Can a mouse die from fright?

Mice can die from fright. In fact, they have been known to pass from stress-induced disorders. This could be triggered by your cat attacking the mouse or other reasons. Also, it doesn’t take long for this to happen, for example, within hours.

You may be thinking that if your cat is just playing with the mouse it is fine, right? Well, now you know that this can be detrimental to the mouse due to the stress that it causes.

Mice are known to play dead and from this perspective, they are quite clever. If they detect danger from their predator, for example, a cat, it will act like it’s dead in the hope the cat will show mercy. Once the cat allows it to escape it will runoff.

This explains why you may have seen a cat claim a mouse as their hunting trophy (click here if its started doing this to you) only to find it disappear later once its back is turned.

Can mice detect a cat is after them?

Mice can indeed detect when a cat is after them. They have a survival instinct that will alert them when their predator is after them. This is obviously not full proof, or they would never get caught. But, it has the ability to save them a small percentage of times.

Once they detect that their predator is after them one of their techniques, as discussed earlier, is to play dead. Which, in most cases will stop their predator from pursuing any further attacks.

How do you tell if a mouse is injured?

Sometimes it is obvious that a mouse has been injured but in some cases, it may not be. In this situation, if it has come into contact with a cat it is safe to assume that it has been injured. Otherwise, there are other things that you can look out for:

If you notice that the mouse’s legs or even its head is out of place it is a sign that it is injured. In some cases, this is more obvious, but not always.

A mouse is quite small but it is possible that its fur may look ruffled or out of place. Again, this is another indication that it has been injured.

How do the bacteria on a cat’s teeth affect a mouse?

If a cat gets hold of a mouse there is a good chance it will bite it. This will inject bacteria into the mouse that can cause a fatal infection. If it is caught quickly enough an antibiotic can be given to it by a vet. But, not all vets are available in this time frame.

So, when you see a mouse caught by a cat the chances are it will die from its injuries. Because even a minor bite can be a big deal to a small mouse.

Can mice pass on diseases to a cat?

Mice have the ability to pass on infection to a cat. This can be in the form of parasites or even roundworms. The biggest issue is, once your cat is infected, this can then pass onto its owners through its feces.

This is one of the reasons mice are regarded as pests to some people. And, it is why some cat owners panic when they see their cat come home with a mouse in its mouth.

Do mice sleep a lot?

Mice are known to sleep a lot. in fact they spend most of their life asleep. To put this in perspective, you can expect them to spend up to 14 hours sleeping. Also, they are rarely active in the day, this is why they are hard to find sometimes.

They tend to come out at night when humans are sleeping and sneak around looking for scraps of food to keep them alive.