What Breed of Cat is Garfield? (Is it really?)

If you are a fan of the cartoon character Garfield, you may have always wondered what Breed of cat it is.

What Breed of Cat is Garfield?

Jim Davis’ lasagna-loving cat is an orange Persian/tabby cat. Some say he looks more like a Persian cat, while others postulate that the stripes are more definitive of a tabby cat. Likely Garfield is a mixed-breed cat, both Persian and tabby.

So, now you know what breed it is, keep reading to learn if Garfield is a boy or girl, why Odie never talks, what real Persian cats eat, and so much more…

Some features that help identify Garfield are his round face, his striped body, and his bright orange color. These features are common within both Persian and tabby cats. The comic strip is not specific about what length of fur Garfield has, but since Persians bred with exotic shorthairs, a shorthair Persian/tabby is the likely answer.

Garfield is a comic strip illustrated by Jim Davis. It became nationally syndicated under the name “Garfield” in 1978. Since then, it has become the world’s most widely syndicated comic.

Garfield focuses on the life of an overweight orange cat named Garfield. The portly cat is famous for his love of lasagna and his hatred for Mondays. Other characters include Jon (Garfield’s owner) and Odie (the dog), as well as frequent guests.

Where does Garfield’s Name come from?

Garfield was born near an Italian restaurant, which is how he developed his infamous love of lasagna. Eventually, though, he ended up at a pet store, which is where Jon found him and decided to adopt the chubby, lovable cat.

Garfield is a sarcastic cat who does not take criticism without dishing snark back. Garfield loves Jon and Odie, but that will not stop him from teasing them relentlessly. Garfield also loves his teddy bear, who frequently appears in the comic strip.

Were there other Garfield related shows?

Several films and television shows spun off and took inspiration from the original comic strip. In 1988 the first Garfield television show premiered, Garfield and Friends. Bill Murray, Scott Beach, and Tom Smothers are just some of the voice actors to portray the portly cat.

Other adaptations of the Garfield comic strip include video games and a musical that never took off.

Garfield is still gracing the funny pages. The inspiration and designs are all still the work of Jim Davis, though some of the illustrations are completed by Dan Davis.

What is a Persian Cat? 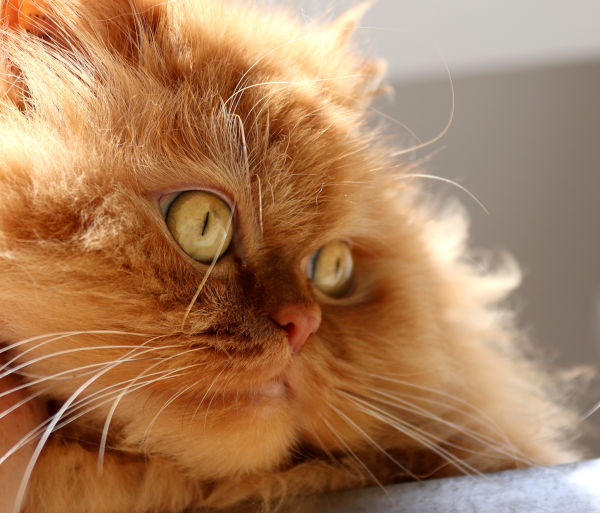 What breed of cat is Garfield?

Persian cats are the second most popular breed of cats in the United States. Persian cats are characterized by long hair, squat legs, and short noses.  Their fur comes in many colors, but perhaps the most famous is the luxurious white coat sported by many Persian cats.

The specific origin of Persian cats is not widely recorded. In the 1600s, records exist of Persian cats being imported from Iran to Italy, as well as from Turkey to France.

These cats tend to be mild-mannered and enjoy lounging. They shed a lot of hair. They also tend to be personable and enjoy sitting in their owners’ laps.

Persian cats come in just about every color in which you can find a cat. Their eye colors vary but tend to include blue, copper, blue-green, and hazel.

What do Persian Cats Eat?

Cats are strict carnivores, which means they must eat a large proportion of meat to stay healthy and nourished. Carbohydrates are not necessary for cats, so if you are choosing food for a Persian cat, opt for a choice with lots of meat-based protein.

Many Persian cats have flat faces and short jaws. This can occasionally cause issues with chewing and hydration, so many Persian cat owners opt for feeding their cats soft, wet food in addition to dry cat food. Shallow food dishes will also make it easier for Persian cats to eat with their short muzzles.

Some cat food brands have options to help prevent hairballs, which can benefit Persian cats, because of their long fur coats.

Persian cats have long, thick fur. They do shed quite a lot. It is important to brush Persian cats frequently and take them to be groomed to prevent matting in their coats. Regular grooming can also prevent the accumulation of hair in your home.

Brushing Persian cats every day will remove loose hairs and collect them. Persian cats can also tolerate bathing roughly once a month, which will help to remove dirt and keep the skin of the cat healthy.

What Color are Real Persian Cats?

The color groups of Persians include silver, gold, white, smoky, and solid-colored. Due to the widespread breeding of these cats, though, it is common to find Persian cats in pretty much any natural cat color.

The most popular colors for Persian cats are white, calico, black-white, Himalayan (beige with red accents on the ears, paws, and face), silver, blue point, and tortoiseshell (tricolor, with small, if any, white marks).

Is Garfield a Boy or a Girl?

Jim Davis said in a Mental Floss interview “Garfield is very universal. By virtue of being a cat, really, he’s not male or female or any particular race or nationality, young or old.” In the comics, Garfield is usually described using male pronouns and descriptors such as “boy.”

After a raging Wikipedia edit war that included many debates on the topic of whether or not Garfield is a boy, Jim Davis answered a more direct question posed by The Washington Post, “Garfield is male.”

Likely, Jim Davis meant during the Mental Floss interview that Garfield was created for all audiences, regardless of their background. Davis created the chubby cat for people from all walks of life.

Why Does Odie Not Talk in Garfield?

Odie likely does not speak in the Garfield cartoons, because he portrays a stupid dog who does not have enough intelligence to have anything to say. Furthermore, Garfield is the “star of the show” and likely tunes out anything that Odie would have to say.

Garfield was a famous cat in Ely, Cambridgeshire. He visited the Sainsbury’s supermarket in the town frequently after its construction in 2012 across from where Garfield lived. He passed away in 2019 after being struck by a car in a parking lot and the veterinarian was unable to save him.

His Rise to Social Media fame

Garfield, also called Mr. Sainsbury’s, rose to fame and gained over 5,000 followers on Facebook when he became a fixture of the Ely location of Sainsbury’s. He became friendly with many of the customers, and his owner once had to ask fans to stop giving Garfield treats because, like his namesake, he was growing chubby.

Garfield’s owner, David Willers, and Cate Caruth co-wrote a book telling the story of Garfield (Garfy) and his adventures in the supermarket. The book sold out almost immediately, as Garfield’s fans flocked to read his story. The Ely Library even hosted an event where Garfield “signed” copies of the book with a pawprint stamp.

Was Garfield Based on a Real Cat?

Jim Davis grew up on a farm with numerous cats. He based his drawing of Garfield on those large farm cats. The name “Garfield” comes from Davis’ grandfather, James A. Garfield Davis, who Davis described as having a personality similar to that of the famous cat.