If you have a tuxedo cat, or planning to get one you may have wondered about what breed the cat is…

Why are they called Tuxedo Cats?

A Tuxedo cat is named this because of its look. They typically have a black and white bi-colr that resembles a tuxedo. Hence the name.

When you look at them after learning this it makes perfect sense. I say this because the same thing happened to me when i learned this.

Is a tuxedo cat a breed? 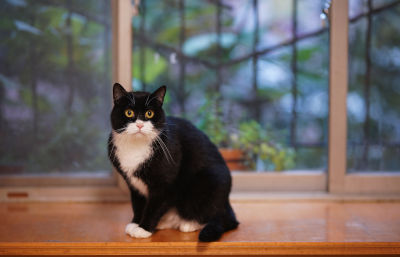 Cat looking away from window, on a window sill.

A tuxedo cat is not a breed. In fact, it is a classification of this cats fur coat pattern. Therefore, you can have several cat breeds that are clarified as a tuxedo cat.

There is often a big misconception about these cats. Why? BEcause most people assume they are a breed instad of a pattern type. And, it can get confusing when people use the term interchangeably when talking about breeds of cats.

What is a tuxedo cat?

A Tuxedo cat typically have two colors, black and white. This is also known as bi-color. Which comes from teh term ‘binary’ often used in computing for one of 2 states, zero or ones.

Depending on who you speak with any cat that has black and white coloration is a tuxedo cat. Bu, some pureists say it more than that. Meaning, it should have white color patches in specific places. For example, on its belly, or face.

The effects of the white spotting gene

The white patches that you see are the effect of discoloration from the white spotting gene. This means that technically they are black cats with spots of white discoloration.

To be truly classed as a tuxedo cat they need to have the majority of their fur back, with the remaining being white. For example, 40% or less white would fit them into this classification.

Are all tuxedo cats black and white?

No. Although the most common tuxedo cats are black and white they do not have to be. For example, orange and white. Or, a gray color with white patches.

So, you may have a tuxedo cat but have not known it. The main thing is it has the expected pattern and bi-colr.

Are there different types of tuxedo cat?

Yes. There are different types of tuxedo cats. The most common, or classic type have predominantly black fur with white patches on their throat, belly and paws. However, if it has white patches on its nose and teh chin, it could be classed as a masked tuxedo.

Other known variations include a black tie tuxedo. These cats typically have what patches around their chest area that resemble a bow tie.

What breed is my tuxedo cat?

To work out the breed of your tuxedo is no different than working out the breed in general. Meaning, if you have no official paperwork then its unlikely to be a pedigree breed. Therefore its likely to be a mixed breed, or a domestic short or long haired cat.

IF you are keen on finding out what mix it is you can consult the pet shop or breeder you purchased it from to confirm.

Is there any cat breed that only has tuxedo cats?

There is no cat breed that only has tuxedo cats. So, that is why it can be a challenge to work out teh true breed.

However, there are many known pedigree breeds that are known to have tuxedos within them.

What cat breeds are known to have tuxedo coloration?

Some cat breeds that are known to have tuxedo coloration include Persian, Scottish Fold, Exotic Shorthair, and Norweign Forest Cats.

Are tuxedo cats have to be male?

No. Tuxedo cats can be male and female. Unlike calico cats you have an equal chance of a male or female tuxedo cat.

As discussed earlier, there is a limited set of pure breeds that are known to have them. But, there is no real shortage of these cats. In fact, they are quite common.

What eye color do most Tuxedo Cats have?

Most tuxedo cats have a green or yellow eye color. The theory is that the white spotting gene, that causes them to have white patches in the first place, is responsible for their eye color as well.

Although there are no known studies to prove this there is enough of these cats to show a clear corelation to back this up.

Dating back to egyptian times, it is well known that cats were respected. This is evident from the ancient remains that has surfaced many years later. Some of these remains show the egyptions looking like cats, in a form of worship.

One of the most interesting things is that the majority of these remains and hieroglifics were of tuxedo cats. So, it seems that the love of these cats dates far back.

Are there tuxedo Ragdoll cats?

As discussed earlier there is a limited set of cat breeds that are known for tuxies, such as the Maine Coon or Oriental Shorthair.

No. Tuxedo cats are not the domestic shorthair breed. In fact, they are not any breed. They are the categorization of a particular bi-color fur coat pattern.

And, as discussed earlier, they can be found in many cat breeds. But, no specific cat breed has 100% tuxies. And, on top of that, they are limited to a selection of breeds that can even have them.

Are tuxedo cats smarter than other cats?

Yes, many people say that tuxedo cats are smarter than other cats. Theory has it that they can be twice as clever as a regular cat of that particular breed.

However, this is quite subjective. And, I have not seen any specific study that truly quantifies this theory. But, that being said, there are many cat owners, that have spent many hours with these cats, and have observed their intelligence.

How much are tuxedo cats worth?

However, the biggest factor that impacts teh cost is the breed. Pure bred cats are quite expensive. And, some people may value a pure bred tuxedo even more than the norm.