Should Cats Have Free Reign of My House?

If you have a new cat or one that is restricted in your home, you may be wondering if it should have the right to roam free inside…

Should Cats Have Free Reign of My House?

So, now you know. But, do cats ruin your home? How can I prevent my cat from recking my place? Why is it a good idea to keep a new cat in one room first? Keep reading for these answers, and much more…

Contents show
1 Should Cats Have Free Reign of My House?
2 Why it’s important to establish cat boundaries…
3 Do cats ruin your house?
4 How can I prevent my cat from damaging items in my house?
5 Why should you keep a new cat in its own room on its first night?
6 Why is it a bad idea to give a kitten go anywhere in your home?
7 When is the best time to give your cat free reign of your house?
8 Should I let my cat roam the house at night?
9 Is it OK to keep cats in one room at night?
10 How can you work out where your cat is in your home?
11 Can cats stay in one room all day?

A cat staring while standing on a kitchen sink.

Cats are curious by nature and they love to explore, but you’ll have to spend a bit of time establishing boundaries so that your cat understands when a spot is off-limits. A firm ‘no’ followed with the positive response of ‘come here’ followed by a treat and a little play can help to get the message across.

Once your cat is a little older and more familiar with the house, then they will be much more laid back and it’s less of a gamble to trust them with the full run of the house. Keep in mind that spaying and neutering also make a difference, calming cats down quite a bit.

Do cats ruin your house?

Cats can and do, on occasion, seem to feel like the world is their scratching post. This isn’t a big deal outside, but inside it can be a source of frustration. There are a few things that you can do, however, to divert this behavior into something that’s not going to damage your furniture.

The first thing that you want to do is to simply invest in one or more scratching posts. Put these near to the areas where you’ve caught kitty scratching things and see if your cat takes to them.

If this doesn’t help, there are also citrus-scent deterrent sprays that you can use and double-side tape placed temporarily where your cat will have to touch it to scratch something will often stop this behavior in its tracks.

Finally, distraction is a great and also a fun way to help deter this behavior. When your cat is about to scratch, whip out a laser pointer or simply call them over for play for treats, close to the new scratching post. Be patient and after a while, your cat will get the message.

How can I prevent my cat from damaging items in my house?

Keeping your cat distracted is the best way to go when it comes to destructive behavior in the house. Sometimes your cat is simply bored and doesn’t realize that some of the things that they are playing with are important to you.

Some constructive ways to keep them distracted include new toys, cat towers, and a little double-sided temporarily placed in areas that you don’t want them to visit can work wonders (the tape especially, cats don’t like the sticky feel).

Why should you keep a new cat in its own room on its first night?

That first night, everything smells unfamiliar, and a nervous cat exploring your house can be a recipe for disaster. To keep stress levels down for both of you, your cat should spend their first night in one room, with some toys, treats, and catnip, and after that you can let your cat explore a little.

When you’ve brought a new kitty home, then your cat is going to be very nervous. Cats rely heavily on scents to make themselves feel comfortable, which is why you see them rubbing against furniture and against you so much. They have numerous scent glands on their bodies and this affectionate rubbing also happens to mark you with their scents.

Just be sure to supervise them so they’ll stay out of trouble until they’ve learned where it’s okay to go and where they shouldn’t go!

Why is it a bad idea to give a kitten go anywhere in your home?

Kittens are adorable and while they are still more agile than the average human, they can get themselves into a lot of trouble. It’s not just a matter of what they might knock over and break or scratch up – your kitten can easily get hurt.

Kittens often squeeze into tight places behind furniture and as they are still learning to jump, they can take a lot of tumbles. Until they’ve got a little more control and know the house better, you should always keep them supervised.

When is the best time to give your cat free reign of your house?

Cats hit their ‘teens’ at 4 to 9 months of age and you can give them freedom of the house at this time or even earlier, provided you’ve relocated anything you’re worried about which they might knock over – it’s really a matter of taking a leap of faith and trusting your cat.

Some say spaying or neutering can help. Why? They say it calms your cat, and it may be good for their health and increases the chances that they won’t get into trouble and your cat will calm down fully between 7 and 10 years of age. But, it’s a personal choice.

You don’t have to wait that long, but you should wait until they are big enough that they won’t accidentally hurt themselves  – they should know the house well by then and stay out of trouble (mostly).

Should I let my cat roam the house at night? 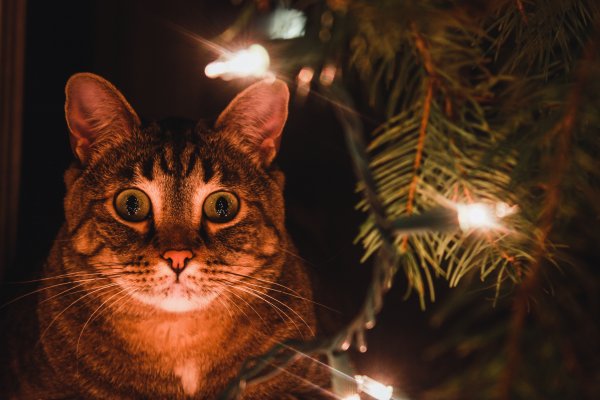 A cat at night next to a green plant staring.

Yes. You can’t just lock your cat in a room every night – nobody likes a cage! Your cat is nocturnal and will likely be exploring the house at night, playing from time to time, napping, looking out the windows… keeping themselves amused, basically.

Once your cat knows the house very well, as long as they have enough toys and you are actively working to communicate where they should not go by means of distraction or the ‘double-side tape’ method, then you need to give them a little freedom to see what happens.

More often than not, your cat will stay out of trouble, but if anything happens do not panic and do not try to discipline your cat. Something knocked over, for instance, should be examined to determine the appeal and fragile items which are similar might best be relocated.

Your cat can’t tell that they aren’t toys like a human can and so this is the best way to go.

Is it OK to keep cats in one room at night?

Yes, it is okay to keep cats in one room at night while they are still getting used to the house. You’ll want to prepare the room accordingly, however, by adding toys to keep your cats occupied, along with their food, water, and a comfy place to sleep.

After your cats get used to the house then you won’t want to keep putting them in the room all of the time, it’s just a measure that you can take in the beginning until your cats have learned the rules of their new home.

Also, don’t forget to give them treats and affection when you let them out in the morning so that they know they are not being punished! They’ll get used to the house quickly and when they do, just move the toys outside of that room and you shouldn’t need to lock them in again.

How can you work out where your cat is in your home?

Some cat owners like to use bell collars for house cats, as this makes it easy to find your cat when they are roaming around the house. The easiest way, however, when your cat is acclimating to their new home, is to simply make the house available in sections.

By closing the doors to all but a few places, you limit where your cat can go, and this gives them time to explore each new area thoroughly before you ‘unlock’ new portions of the house. By the time your cat gets used to the whole house, they’ll also be used to you, and then you can simply call them to you from wherever they are in the house.

Can cats stay in one room all day?

This is okay when you first get them home, provided that you give them some kind of entertainment. Just like people, animals love and deserve freedom, but when it’s a new house you can’t always supervise them properly and so room-confinement may be a necessity for a space.

Be sure to provide plenty of toys to keep them occupied, along with their basics such as their food and water bowl, litter box, and a place to sleep. If your cat acts outs, it is also important not to lose your temper – after all, they’ve been ‘locked up’ all day, and acting out shows you that they are stressed.

Clean up the mess and give your cat some positive love and attention, followed by some supervised exploration of the house so that they’ll learn the rules and you won’t need that room for kitty confinement anymore!