Why Is My Mother Cat Suddenly Aggressive Towards Kittens?

If you have noticed that your cat has been acting aggressive with its kittens, you may be wondering why and if there is anything you can do about it…

Why Is My Mother Cat Suddenly Aggressive Towards Kittens?

If your mother cat gave birth within the last three to four weeks, she may be experiencing her hormones shifting. This means at any point in that period, she may appear aggressive towards her kittens or anyone who comes near them.

She might also become aggressive suddenly as a response to perceived threats around her, such as other cats, people, too much noise, or an unsafe environment.

Is It Normal For A Mother Cat To Act Aggressive To Its Kittens? 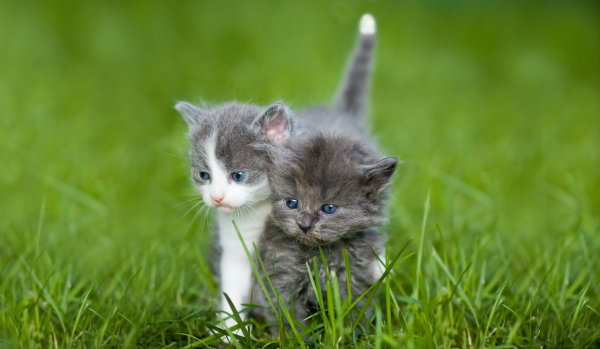 Two kittens are outdoors on the green grass walking.

When a cat gives birth, she experiences a rush of hormones right after. It can take time for these hormones to regulate themselves, so she can become aggressive as a result. She might also be aggressive because she needs rest and she’s stressed out, which is completely normal for motherhood.

How Can I Prevent My Cat From Acting Aggressive To Its Kittens?

One of the best ways to prevent your cat from becoming aggressive is to keep your cat’s stress as low as possible. You want to take care to set up the most comfortable area for your cat to give birth and raise her kittens until they are independent.

The space needs to be quiet, enclosed and set up with food, water, and litter boxes. Try not to fuss over kittens, and keep a slight distance when observing or monitoring everyone.

Is It OK For Me To Handle My Cat’s Kittens? 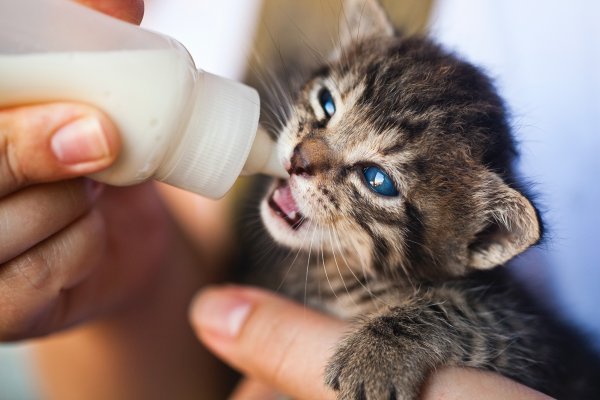 A person feeding a kitten.

You will have to abide by the mother’s cues when determining whether or not you should handle kittens. It’s normal for mother cats to be aggressive and territorial over their babies. The level of trust developed between you and the mother will play a role, but don’t be surprised if she is still apprehensive to let you handle her babies even if you two have bonded.

It may be hard to resist the instinct or the urge to give newborn kittens some love and affection, but trust that your mother cat has things under control. She could use your support, but from a distance, and only when it doesn’t seem to bother her that you’re close by.

Could My Cat Harm Its Kittens?

It’s not likely that your mother cat will harm her kittens due to aggression. The only time a mother might instinctively harm one of her kittens is if she doesn’t believe the kitten will survive. Be sure you’re looking out for signs of neglect or harm and intervene, as the mother can’t comprehend that medical intervention may be able to save the kitten.

Why Is My Mother Cat Growling At Her Kittens?

There are a few reasons why your cat is growling at her kittens. For once, she could just simply be tired and doesn’t want to put up with their shenanigans anymore. She might also be trying to encourage her kittens to wean off her milk so they can start becoming independent.

When kittens naturally come to the point of maturity and can survive without their mom, she will encourage them to stop relying on her. She doesn’t do this to be mean; this is simply instinct. She wants her babies to grow into cats that can manage on their own.

Is It Normal For Mother Cats To Bite Their Kittens?

If you see your mother’s cat biting kittens, likely, she’s not trying to harm them or be aggressive towards them. Biting is one of the skills that moms teach their kittens, as biting and nibbling serve multiple purposes for cats.

Sometimes, biting and other similar behaviors look aggressive from the outside, but your cat might be trying to train or teach her kittens skills. As long as the kitten doesn’t look too distressed, it isn’t something to be too concerned about.

Bites can also aid in a cat’s grooming process, and moms help groom their kittens until they can groom themselves.

Your mother cat will act this way to keep her babies safe. To mitigate her stress as much as possible, create a suitable, calming, and quiet environment for your mother cat and her kittens, and avoid having anyone fuss over them too much.

What might seem like weird behavior to us could just be normal behavior for cats. For example, some mother cats will want to move their kittens to a new location if the previous one isn’t suitable for their needs, such as if it’s too hot or cold in one area.

Even though cats have instincts for caring, being a new mother is stressful, even for cats. As such, your mother cat may act differently as she tries to adjust to motherhood. This might also lead her to forgo maternal instincts initially like nursing or cleaning, so try to reduce her stress as much as possible.

There’s also the possibility that your cat is dealing with some post-birth discomfort or health issues. This might make it difficult for her to nurse or be there for her kittens. Be sure to monitor everyone as best as you can without being too disruptive so you can get her medical attention if necessary.

Why Is My Cat Being Mean To Her Older Kittens?

As her kittens are becoming older, their mother is going to try to encourage their independence. She knows it’s what’s best for her kittens, but on the outside, it might look as though she’s being mean.

On the other hand, all parties involved will need to be spayed and/or neutered when the kittens are between four to six months old; the timeframe will be determined by your vet. The meanness and aggression should go down significantly once the mother is spayed, and the kittens are fixed as well.