What Does It Mean When a Random Cat Comes to Your House?

If you opened your do to see a random cat you may be wondering if this has some superstitious meaning, or if there is just a practical reason for this.

What does it mean when a random cat comes to your house?

It is believed that a random cat at your house is good luck. If you believe in superstition, then this is your answer. However, there are other practical reasons for this. Such as, being lost, hungry, or even just curiosity.

So, now you have an idea of a few reasons for this. But, what is cat symbolism? What are other examples of good luck cat omens? When did these superstitions start, historically? Keep reading to get these answers, and so much more.

Contents show
1 What does it mean when a random cat comes to your house?
2 The 3 main reasons why a random cat comes to your house
2.1 01. Curiosity
2.2 02. Hunger or Lost
2.3 03. Superstition (Good Luck)
3 Are cats a sign of good luck?
4 What is cat symbolism?
5 When did cat superstitions start?
6 What are some of the known bad luck cat omens?
6.1 Sign of a storm
6.2 Illness coming?
6.3 Bad Luck?
7 What are some examples of good luck cat omens?
8 What does the Angora cat symbolism mean?
9 What are the esoteric theories about cats?
10 Could this cat just be a stray cat?
11 What other reasons could a cat appear at your door?
11.1 Hungry or thirsty 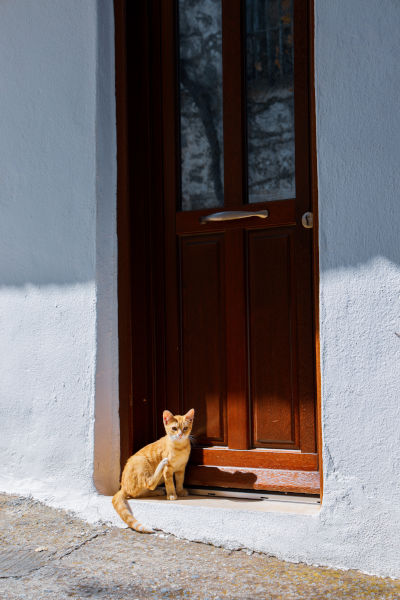 Cat at a door.

There are many reasons why a random cat might show up at your door. As tempting as it might be to take it in. It’s a good idea to explore why that cat might be there in the first place.

Cats tend to be very curious creatures. A cat might show up at your door because he sees something interesting, such as a toy, and wants to find out more about it.

New noises and smells might also pique a cat’s curiosity. The cat also might be lost or hungry. If it shows up at your door, it might be seeking a safe place to hide. If it has a collar and is well-groomed, it has an owner and so it’s used to being around people. It is likely searching for its owner and, since you’re a person, you are a familiar sight to him.

As discussed, some people are superstitious and believe a cat is good luck. Whether you believe it or not hinges on your personal choices.

Some superstitions might have you believe that a cat showing up at your door is good luck. This dates back to thousands of years ago when the Egyptians believed that the presence of a cat would protect you from evil.

However, if you encounter a black cat, it is often believed that it brings bad luck. This is just a myth and has not been proven to be true.

What is cat symbolism?

There is also a lot of symbolism with cats. They are very spiritual animals. They represent rebirth and resurrection. Remember, cats have nine lives!

They are also associated with darkness, perhaps because they are nocturnal. Their symbolism seems to be a balance of two opposite things – light and dark, good and evil, up and down. How you interpret the symbolism with a cat might depend on your encounter with it.

If something bad happened right after you spotted a black cat, you are likely to buy into the symbolism of cats being evil. However, if you win the lottery after a stray cat sits on your doorstep, you might associate cats with luck and prosperity.

When did cat superstitions start?

What are some of the known bad luck cat omens?

Cats have often been thought of as bringing bad luck. Some of the wider-known bad luck cat omens involve the weather.

For example, if your cat lies down with his back to the fire, a storm is coming. Rain might also be on the way if your cat licks his fur in the opposite direction. If you happen to find a cat on your boat, you can be sure the seas will be rough that day.

It has also been said that the presence of cats can be a sign that illness is coming. If your cat sneezes three times in a row, the flu might be on its way. If you happen to dream of a black cat around Christmas, you can be sure that serious illness is on its way.

Cats are also often thought of as unlucky. It is bad luck if a cat follows you when you leave home. If you let a cat sleep with you, he might steal your breath away. People who play with their cats a lot are always unlucky.

Of course, these are all just superstitions, reminiscent of old wives’ tales. None of these have been proven to be true.

What are some examples of good luck cat omens?

You don’t have to be frightened of your cat though. Not all cat omens are bad. There are plenty of examples of cats being associated with good luck omens.

For the most part, if a kitten comes into your home, it is considered lucky. If it’s a spotted cat, even better. Good fortune will surely come your way. Dreams of playful kittens mean you have some influential friends looking out for you. A bride would be considered lucky to witness a cat sneezing on her wedding day.

Again, none of this is proven. When it comes down to it, you are really responsible for making your own luck.

What does the Angora cat symbolism mean?

Over a thousand years ago, Angora cats were very popular amongst rich merchants and were known as a symbol of wealth. It’s no surprise that when you cross paths with an Angora cat, it is a reminder to appreciate the beauty of your surroundings and the wealth that you have. Angora cats symbolize gratitude for a well-lived life.

What are the esoteric theories about cats?

Esoteric theories are ones that are understood by a small number of people. Some people believe cats to be mystical animals and that they have a supernatural “sixth sense”, giving them the ability to ward off negative energy and spirits.

This theory says that cats who enter into your life have a mission to rid your home of negative energy and protect you from bad spirits. There is no scientific evidence for this belief. Cats are great companions and bring joy to many people, which is not proof of these esoteric theories.

Could this cat just be a stray cat?

If a cat has a collar, tags, or looks to be well-groomed and fed, it likely has a home and is not a stray. If there is no collar, you can take the cat to a local veterinarian or shelter to check for a microchip. The absence of a microchip doesn’t mean it doesn’t have an owner.

It could just be a stray cat though. It might even be used to the lifestyle and actually enjoy living outdoors.

If it is a feral cat, it means it was never domesticated in the first place. These cats don’t often adapt well to a domestic setting and will likely be perfectly happy continuing to live outside. They might just hang around your house as long as you continue to feed them.

What other reasons could a cat appear at your door?

When you first notice hear the sweet sounds of a kitty meowing outside your door and you decide to feed it, the cat is very likely to return. It now sees you as a food source, so it will probably continue to come around.

If a cat just randomly shows up at your door, it could be hungry or thirsty. It’s up to you if you would like to feed the cat, but you should probably figure out whether it is a stray or if it has a home.

A cat that shows up at your door could also be looking for a safe refuge. It may be lost (Click here to see why, if your cat is lost and found, it could still be complicated), cold, or frightened and it is seeking shelter. Whatever the reason a random cat comes to your house, it has chosen you. So, whether you see this visit as a good omen or a bad one is up to you.