When To Leave New Cat Alone With Resident Cat

If you have a new cat, you may be wondering when it is safe to consider leaving it alone with your resident cat…

When Can I Leave My New Cat Alone With The Resident Cat?

New cats and resident cats shouldn’t be left alone and exposed to each other until both have been socialized. It can take more time to integrate two adult cats than it does two kittens, or an adult and a kitten. You will have to exercise great patience and caution with each cat before allowing them each free reign of the home.

What Could Happen If I Leave My New Cat With My Resident Cat Too Early? 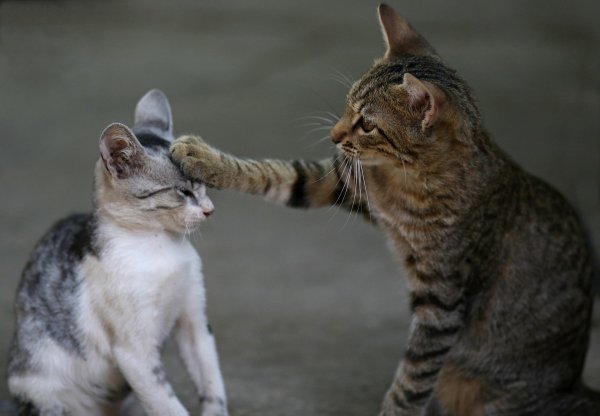 Both cats could end up feeling unsafe in the home if they are exposed to each other too early. Your resident cat will be trying to assert dominance and territory, while the new cat will either be terrified or will act aggressively in self-defense.

The two cats may end up fighting, stealing each other’s food, or may make a lot of noise. Both cats could also lose trust in you because you’ve put them in an uncomfortable situation.

Could My Resident Cat Attack My New Cat?

There is the potential that your resident cat would attack your new cat to dominate them or to chase them away. This is why the proper introduction of two cats is crucial for both cats involved. Trying to separate two fighting cats can be difficult, and could lead to you getting hurt.

What Is The Best Way To Introduce My Resident Cat To My New Cat?

You can then slowly allow them around each other for short periods, supervised, slowly increasing the amount of time they’re together. If one gets unruly, make a quick, loud noise to distract them, then separate them.

Why Does My Resident Cat Act Aggressive To Other Cats?

Your resident cat is used to being the sole cat of the home. When you introduce a new cat to the mix, they can struggle to share their space. It will take time for your resident cat to learn that there’s enough love and resources to give to both cats.

While this aggression can be disheartening to see, it should only be temporary. Just make it a priority to give both cats their own dedicated time for snuggles and play so neither feels neglected.

How Long Should You Keep A New Cat In A Separate Room? 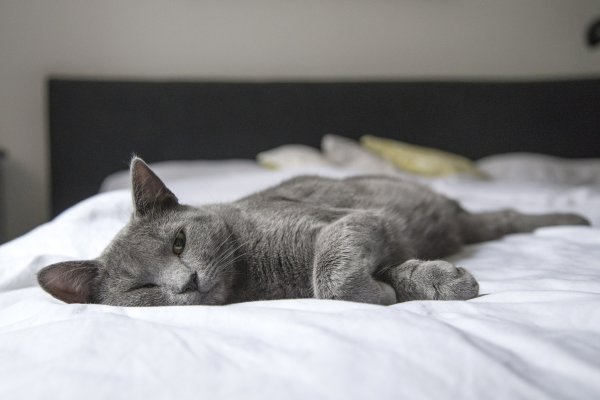 A gray cat lying on a bed covered with a white textile.

The first two or three days after bringing a new cat home, they should spend their time in a separate room. If they were recently fixed, they may need a few more days. This allows the new cat to get to know you on their own, while also adapting to living in a new home.

All cats will react differently to being introduced to another cat, so you will have to gauge the exact amount of time each cat needs based on their behavior. Your new cat will likely give you cues when they’re ready to start exploring more of the house.

What Is The Normal Amount Of Hissing In Introducing A Cat?

The first few days your cats are going through the introduction phase, they are bound to hiss at each other. Each cat will do this to keep the other cat at bay so they don’t get too close. Hissing should hopefully dissipate after a few days of controlled introduction.

Even after your two cats have become acclimated, they might still occasionally hiss at each other. This could be because one is trying to sleep and the other is trying to play. As long as it doesn’t turn into an all-out brawl, there’s nothing to be concerned about.

Should I Let My Cat Hiss At The New Kitten?

You won’t be able to stop your cat from hissing, but you can control the circumstances. Once either cat starts getting into a defensive stance, with ears back and backs arched, it’s time to separate the two. The cats may also sniff at each other before hissing, or may even lightly swat each other as they are becoming acclimated.

This is completely normal.

Don’t let your cat hiss at the kitten for more than a minute or so. At this point, either cat may become defensive or may become too overwhelmed, and both should be given a break to relax.

What Happens When Two Cats Meet For The First Time?

When two cats meet for the first time, it can be a confusing experience depending on each cat’s experience. It may be the first time either is seeing another cat that wasn’t a sibling. Cats should be able to smell each other with a boundary set up, such as a door or gate, before seeing each other.

You want to have as much control and involvement in the process of letting your two cats meet, but you can’t always control the outcome. You have to tune in to each cat’s cues and listen to both. Each cat needs their setup, including food, litter boxes, beds, and toys, and each cat needs to get a good amount of attention and affection throughout the process.

How Do You Tell If Cats Are Getting Along?

There are a few indicators that your cats are getting along once they’ve had the time to get to know each other. You’ll see the cats spending time with each other, either at a small distance or close together. Cats will often groom each other and snuggle when they have learned to trust each other.

Cats who love each other will also often touch noses, headbutt each other, or rub their faces together. This is their way of communicating with each other, exchanging scents, and establishing themselves as a family. Some kitties will also have the occasional scrap, so don’t take this as a sign that they’ve regressed.