How To Be Vegan And Own A Cat: (Is This Ethical?)

If you are a vegan or planning on becoming one, you may be wondering if it is ethical or possible to still be a cat owner…

Can you be vegan and own a cat?

You can be vegan and own a cat depending on your beliefs. For example, some say if you have had a cat before turning vegan it’s fine. Also, some believe if you have not bred the cat, purchased it from a breeder, or pet shop then it’s also fine.

So, now you know. But, how can you become a vegan cat owner? Why do some vegans not agree with cat breeders? Can you feed your cat a vegan diet? Keep reading for these answers, and much more…

Contents show
1 Can you be vegan and own a cat?
2 How to be vegan and own a cat:
2.1 01. Decide your moral standpoint
2.2 02. Feed it ethically sourced meat.
2.3 03. Avoid getting your cat from a breeder
2.4 04. Avoid breeding yourself
3 Why do vegans prefer not to use cat breeders or pet shops?
4 Are there vegan cat foods?
5 Is it cruel to force a cat on a vegan diet?
6 Are there any known vegan cats?
7 Can you make a cat a vegan?
8 So, How do you switch them over to a vegan diet?
9 So what are the concerns and arguments surrounding vegan cats?
10 Can a cat’s nutritional needs truly be met with a vegan diet?
10.1 Protein is Protein, right?
10.2 Vitamin D
10.3 Vitamin A and arachidonic Acid
11 What is a Natural Diet for Cats?
12 What are the concerns with commercial cat food?
13 Should Vegans Have Cats?
14 Related questions

How to be vegan and own a cat: 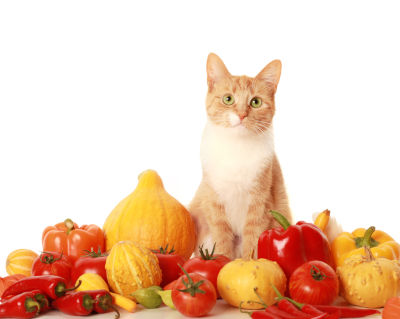 A cat with fruit & veg around it.

As discussed earlier, depending on your beliefs, there is a route to be being a vegan cat owner. Here are some tips that other cat owners have followed:

Before going forward decide where you stand personally. For example, if you agree that it’s OK to keep a cat if you had it before switching to veganism then stick with that.

Also, because you have become vegan, it doesn’t mean your cat has (more on this later). So, you will need to agree on your food plans.

If you have made your moral standpoint clear and decided to keep your cat on a natural meat-based diet then it is a good idea to make sure that the food is ethically sourced.

03. Avoid getting your cat from a breeder

Most vegans do not agree with the practices of cat breeders. This also extends to pet shops. So, it may be an idea to get your cat from another ethically sourced place.

As well as avoiding cat breeders it may be a good idea to not breed cats yourself. If this is what you want to do then maybe labeling yourself as a vegan cat owner could attract some debates.

Why do vegans prefer not to use cat breeders or pet shops?

Vegans do not like pet shops or breeders because of the way they treat cats in the process to breed their cats. This is not just reserved for cats, other animals as well, such as dogs.

Like most things, these are subjective nuanced personal opinions so they often cause long debates with arguments on both sides.

Are there vegan cat foods?

There are vegan cat foods available. In fact, you can get vegan suppliemnts as well to support the diet. This again is another area of debate as to whether this is the correct diet for a cat.

Is it cruel to force a cat on a vegan diet?

Some say it’s cruel to force a cat on a vegan diet. Others argue that the protein can be substituted. And, there are also vegan foods made available for them. It depends on your personal beliefs.

Are there any known vegan cats?

There have been some known vegan cats. In fact, there is reports of two in particular that have lived to 20 years of age. Which is quite impressive for a cat’s lifespan.

Can you make a cat a vegan?

Yes, you can but there is a hot debate if this is even ethical. To do this you need a nutritional plant-based diet with the addition of synthesized supplements. Cats need more than just protein to survive, hence the need for supplementation.

Now you know it is possible, let’s look into how this can be done, the concerns that arise around this, the ethical dilemma, and more.

So, How do you switch them over to a vegan diet?

This is possible, as discussed earlier, with the right combination of a plant-based diet and synthesized supplementation. However, this is quite a complex diet and often referred to as “experimental”.

The only thing I would say is, you have to be very careful that you get this right and it is also a good idea to consult your vet to verify your intentions to make sure he agrees.

Essentially, you can replace a meat-based diet with a plant-based, with the addition of supplementation (more on this later). It is possible but it just depends if you believe it is the right thing to do.

Supplements are being sold commercially, for example, James Pedan (Author of “Vegetarian Cats & Dogs” – Click here to see the book & price on Amazon #Ad) has a product line of supplements for cats.

He is a known authority regarding meatless diets for cats and dogs and according to Peta.org, It is believed that a cat can meet its nutritional needs, without meat, with the correct diet and supplementation.

The real debate comes down the ethics, is it right or wrong? In the following sections of this article, we will delve a bit deeper.

So what are the concerns and arguments surrounding vegan cats?

The argument against vegan cats is, it is unnatural. However, on the opposite side of the fence, some counterarguments suggest conventional cat food that is consumed by cats today in the western world is no better or any more natural than vegan food.

The reason behind this argument is, to truly match the natural environment of a wild cat, you would have to serve your cat live mice or birds.

However, feeding your domestic cat in this way is unmanageable for the average 9-5 working middle-classed cat owner. As well as the moral conundrum of it is even right to do this.

Can a cat’s nutritional needs truly be met with a vegan diet?

In this section, I’m going to explain if it is possible to meet your cat’s nutritional needs on a strictly vegan diet.

According to PetMD.com, they don’t agree that it is possible to maintain a healthy cat on a vegan diet (not easily, anyway).

Their argument is based on the types of protein and nutrients that is needed by a cat that cannot be fulfilled by a strictly plant-based diet.

Firstly many people believe “protein is protein”. The understanding is, as long as they give their cat enough protein then it doesn’t matter if the protein comes from meat or plant-based food.

PetMD.com explains that it is not just any old protein that is required. There are specific nutrients within the protein that your cat needs.

For example, Taurine. This amino acid is something that your cat simply has to have. Without it, there are several potential health-related issues that they may encounter. Including, but not limited to:

There are other potential issues if they do not get a sufficient amount of taurine. Also, it is only in food, but not possible to get it from plant-based food.  However, it is possible to have a synthesized protein supplement with it.

This requirement for taurine is different from dogs which is why people argue that cats, in particular, are not ideal candidates for a vegan diet.

However, the argument doesn’t end here there are other nutrients to consider as well such as Vitamin D, Vitamin A, and arachidonic acid.

Unfortunately, vitamin D is not present in plant-based food. Therefore this is another argument why a vegan-based diet is not the best way to go.

Vitamin A and arachidonic Acid

Also for vitamin A and arachidonic acid, need to be provided through food. Again, this is not found in plant-based food. So, it backs up the argument that a vegan diet is not a good idea.

What is a Natural Diet for Cats?

In the wild, a cat will naturally get its protein from mice (click here to find out why cats eat mice and the risks associated with it), birds, and other amphibians. They will also get their fat source from these food groups as well.

They are indeed known to eat grass (click here to see why indoor cats eat grass). However, this is not a necessity for their diet like taurine, vitamin D, etc.

Commercial food is the industry’s best attempt to give cats what they need and for the most part, it does the job. However, there are concerns about commercial food as well.

What are the concerns with commercial cat food?

Many people believe that cat food is a great option because it is well presented and packaged. However, according to Peta.org, there are concerns about what goes into these products. Such as ground-up pieces of off-cuts that are deemed to be not fit for human consumption.

Should Vegans Have Cats?

This is a subjection question depending on your personal beliefs. Some say it is not morally correct based on the fact they are “obligate carnivores”. Others argue that meat is not right and they do not feel comfortable serving this to their cats. How do you feel about it?

In this section, I’m going to cover some related questions that are specific to cats and veganism. If you feel that there are some questions answered in your head, then take this opportunity to leave a comment below.

Therefore this term, often used when we get into the discussion of veganism for cats, suggests that a cat, by default, is a carnivore and must consume meat. On this basis, it is believed that a vegan cat is not possible.

Obviously, this is where the debate unfolds. Arguments on both sides of the fence come into play.

Is a Vegan diet healthy? Although people assume it is, because it is deemed as “plant-based”, it is possible to eat unhealthy as a vegan. The problem is there are quite a lot of processed vegan-compliant foods available that have low nutritional value.

My cat ate a carrot and is sick, is it because she doesn’t like veg? It could be, but the chances are it is something else. Personally, I would contact your vet first to clarify. It could be because she is eating too fast (click here to see my 3 Best Slow Feed Cat Bowls to stop cats from eating too fast).

Do Cats Know When To Stop Eating?

Can I Mix Different Brands Of Dry Cat Food?