If you have heard about male cats being a danger to kittens, you may be wondering if this is true, and if so, how likely is it to happen?

This behavior is quite uncommon, but it can and does occur from time to time. Tomcats are capable of recognizing their offspring, but how they interact with them does have a bit of a gambling element to it. Some Toms will be excellent fathers and dote on their kittens – but not all of them will.

For instance, many Tomcats will not hesitate to mate with one of their daughters if they haven’t been neutered and the kitten has grown into an adult. Some Toms will also be actively hostile to their kittens, as they want the mother’s attention and if the kittens are gone, she will be receptive to mating again.

In the wild, it’s even more complicated, as kittens in the same litter may have different parents, making it harder for the Tomcat to identify their offspring.

With the small chance that the Tomcat might not be a good father, it’s best to keep a close eye on the new kittens and how the family interacts as you may need to separate them for their safety.

Why do male cats kill kittens? 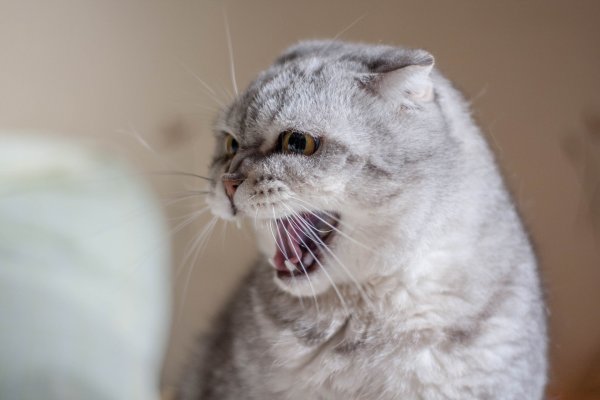 A gray cat staring angrily and with its teeth showing.

While it’s very uncommon for a Tomcat to take this tact with their kittens, it can happen. Tom knows instinctively that the mother will be more receptive to his advances if the kittens are not part of the equation.

As such, you’ll need to keep an eye on a new litter of kittens and their father until you are sure how your Tomcat will behave with them.

Do male cats ever have a connection with their kittens?

Yes, many male cats love their kittens and it’s a treat to watch. As they get older, a doting Tomcat will likely teach the kittens a trick or two about hunting and self-defense and they’ll all get along like wildfire.

Just keep in mind that not all Tomcats are going to care about their children. In feral cat colonies, it’s not uncommon for litters to have multiple fathers involved, leading to situations such as 4-kitten litters where Tom is the only father of one of the kittens.

As such, Tomcats instinctually tend to be indifferent and in less-common cases, even actively hostile to kittens. Nature has given them the drive to desire that only their offspring be present in a litter, so if the kittens aren’t theirs then they might very well be hostile, but even if the Tom fathered all of them there are no guarantees.

In most cases, however, male cats will know that the kittens are theirs and even show their love for them in visible and demonstrable ways – just remember that it’s not guaranteed so you need to keep an eye on the new family until you’re sure.

Could a resident male cat get on with a new kitten?

Yes, a resident male cat might decide to be a ‘stepfather’ to the new kitten. From time to time it happens and it’s quite adorable. You’ll see the male leading the kitten around, playing, and teaching them the rules about being a cat.

That said, it can just as easily go the other way. Some cats, male or female, might not take to a new kitten, and even after a few months, they might be hostile to them or simply indifferent. The only way to know is to introduce them carefully, preferably with the kitten behind the screen of a crate for safety.

All visits will need to be supervised until you can tell by their behavior if the two are going to get along.

How can I prevent my male cat from attacking my kitten?

You’ll need to take a slow approach to the introduction, starting by swapping out their bedding. This will allow both cat and kitten to get used to each other’s scents before you officially introduce them. When you do introduce them, have the kitten safely inside a crate.

You should be present for the introduction and all subsequent visits until you are sure that they will get along. You can help things by giving out lots of treats and making sure that you spoil the adult cat a little bit more than the kitten.

You want them to have happy associations with the new kitten, as this will go a long way.

The process can take days, weeks, or even months, so bring your patience ‘A-Game’ with you and just remember that there is no guarantee that they will be friends, but you should reach a point where they will at least tolerate each other. It just takes a little time.

What is the best way to introduce a cat to a kitten?

A litter of three kittens staring.

All introductions need to be supervised and you should use a crate for the first day or two so that the kitten can be protected. This allows them to sniff each other and you can look for signs of open hostility in the adult, such as screeching, hair standing on end, or ears folded back.

If you don’t see this, then let them meet face to face, and you should be right there with them. Give them both treats and lots of affection, with the older cat getting the lion’s share of said attention, and over time they will relax and adjust to the new living arrangements.

Why do cats kill their kittens?

Cats may kill their kittens for several reasons, such as stress or even the presence of a kitten in poor health. Other reasons are that the parents might be fairly young themselves and not sure how to rear a litter and male cats may even kill their offspring simply because they want to mate with the mother again.

It is uncommon that cats will kill their offspring, but you need to watch them closely until you are sure that the adults and children are going to safely get along.

Can a father cat be around kittens?

Yes. As long as they are not acting hostile, it’s perfectly fine to let the new father spend some time with his kittens. Most male cats will love their offspring, but you need to watch them for the first week to be 100% sure that the male’s intentions are pure and that this arrangement will be a safe one.

Do male cats recognize their kittens?

Usually, yes, but in ‘cat society’ it’s kind of a gamble. This is because, in feral cat colonies, there can be multiple fathers involved in a single litter. As such, it’s a little more tricky for male cats to identify their offspring, and not a whole lot of drive for them to spend time on it.

That said, in a closed environment like your home, the male is much more likely to investigate and sniff the kittens, which can tell them about the kitten’s health and if they are related, so if you have an indoor cat then the odds are that they will indeed recognize their offspring.

How do you keep Tomcats away from kittens?

If you need to separate your Tomcat from his kittens, then the best thing to do is to create a nest for the mother in a separate room and you can spray a little citrus oil outside to help keep the Tom from ‘hanging around and trying to get into mate with the mother.

The nest is easy to make. Simply cut the bottom out of a cardboard box, leaving the walls high enough to keep kittens from wandering out. After that, line the bottom with plastic bags and layer some newspaper over it, so that it’s easy to keep clean.

Keep a litter box close, along with a food and water bowl, and the mom can raise the kittens in this room until it’s safe to let them interact with their dad.