Will Growing Catnip Attract Cats? (Is It Uncontrollable?)

If you have catnip in your garden or planning to, you may be wondering if it will attract cats…

Growing catnip will attract cats. However, as a gardener, this can be used to your advantage. Meaning you can strategically grow the catnip away from your precious crops to avoid them getting damaged.

So, now you know it will. But, will they poop around it? Why are they so attracted to it in the first place? How far can they smell this stuff? Keep reading for these answers, and so much more…

Contents show
1 Will growing catnip attract cats?
2 Do cats poop around catnip?
3 Why are cats attracted to catnip?
4 Does catnip attract other animals?
5 Does catnip attract feral cats?
6 How far can cats smell catnip?
7 How often can cats have catnip?
8 What does catnip actually look like?
9 How much catnip should a cat have?
10 What is the best time of day to give your cat catnip?
11 How can you use catnip to help train your cat?
12 Can you make your own catnip toys?
13 Does the type of catnip make a difference?
14 Is it possible to give your cat too much catnip?
15 Related Question:
15.1 Q: Can cats eat catnip?
15.2 Q: Is Matatabi Safe for Cats?
15.3 Q: Can you grow your own catnip?
15.4 Q: Do Pheromones Help with cat behavior?

Do cats poop around catnip? 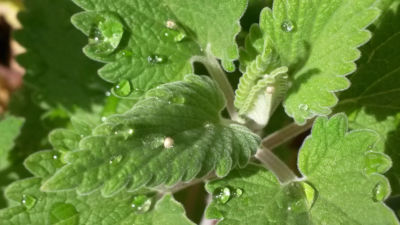 Cats are less likely to poop around catnip in the garden because it will take its effect on them. Meaning they will usually get a temporary high that will change their focus from pooping to the catnip high.

As discussed earlier, this tactic can be used to move the interest away from your important plants in your garden.

Why are cats attracted to catnip?

Cats are attracted to catnip because of the nepetalactone in it. It triggers stimulation that causes its receptors to react to the pheromones. This then gives them a temporary feeling of happiness, often referred to as a catnip high.

Does catnip attract other animals?

Mainly cats are attracted to catnip. For some other animals and insects, such as deer and squash bugs, it works the opposite and repels them. However, butterflies are known to be attracted to it as well.

Feral cats are attracted to catnip, the same as any other cat. So, if you are growing it outside you need to have a plan in place to keep them away from it. Or, use it purposely to attract them and move them away from your other crops.

If you value the catnip and want to keep the feral cats away from it you need to block their access to it by using some kind of fencing or a greenhouse.

How far can cats smell catnip?

Cats can smell catnip from very far away. They can even smell it if it has very low potency. For example, 1 part to 1 Trillion. Therefore if you have it in your garden cats will sense it quite easily.

How often can cats have catnip?

Cats can have catnip Two or three times a week is ideal if you want to use it. However, some people swear by using it daily. Personally, I wouldn’t recommend exceeding more than once a day. Even daily is quite a lot in my opinion. But there is no hard and fast rule on this.

Now that know a guideline on using catnip, let me explain a bit more, in particular. what it looks like, the best time of day to use it for your cat. If it is possible to have too much of it if it can be eaten and more.

Will Cherie discover the catnip planted just for her? pic.twitter.com/prbkgdNrva

Catnip is a perennial plant meaning it lives longer than two years, according to Wikipedia.

It is typically anywhere from 2 to 3 feet tall and usually blooms lavender, pink, or even white. It also has heart-shaped leaves.

This plant is part of the mint family. It was originally from Europe but got imported into the United States and other countries around the world.

How much catnip should a cat have?

When I say “sparingly”, let me clarify exactly what I mean with an example…

If you have a toy that you wish to apply the catnip too. Instead of dipping the entire toy into the oil and soaking it in it. It is better to put a few drops onto the toy. This will be more than enough.

Generally speaking, it is better to use the catnip in a flake or oil representation. There is also another type, with stalks, but I would advise that you steer clear of this. In case your cat ingests it by accident.

What is the best time of day to give your cat catnip?

The best time of day for catnip varies depending on the desired effect. But, let me explain what I mean.

However, the time of day really isn’t so much of an issue. The most important thing is just making sure that your cat is supervised during this period. When she has the catnip, watch her, to make sure that she doesn’t injure herself, while she is hyped up on catnip.

How can you use catnip to help train your cat?

If you are having issues with your cat. Such as damaging furniture or not using equipment that you have given them for example, a cat bed (Click here for my 5 best cat beds for Kittens).

Using catnip can be a good way to train them to eradicate these issues. To persuade your cat to follow the behavior that you would like.

Let’s say that you’ve just bought yourself a nice piece of furniture. And, you’ve noticed that the cat is starting to scratch it forever reason.

You can apply a little bit of catnip (Click here to see if Silvervine could be used instead) on the furniture that is being damaged. This is in the attempt to make the cat respect the furniture and love being around it.

In addition to this.  Let’s say that you’ve got a cat bed that is being neglected. You can apply a few drops of catnip oil onto the pillow of the bed to entice the cat to want to use it, are you with me?

Can you make your own catnip toys? 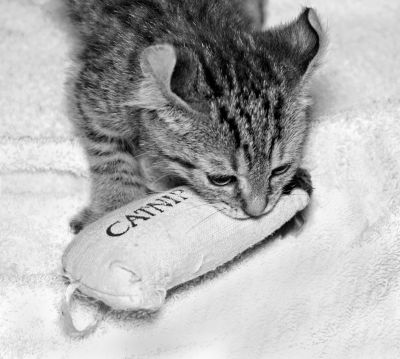 A cat with a catnip toy.

Yes, you can do this. All it takes is a little bit of creativity to make it work out exactly as you want.

For example, if you’ve got an old piece of linen or a sock, for example, you can easily sprinkle some catnip flakes or put a few drops of catnip oil into it. Then roll it up into a ball and hand it to your cat to play happily with it.

Another example could be an old bag or a piece of paper. Apply a few flakes of catnip, roll it up into a ball and throw it around. Your cat will love it.

Does the type of catnip make a difference?

There are different types of catnip that you can purchase. As I’ve mentioned earlier in the article, you can get it in a few different forms:

Generally speaking, the purest form is the best form. This is because it will have the highest potency.

So for example, if you get it in the dry herb form or oil, it’s more likely to have a better effect.

However, if you go for the spray. It may seem convenient but it may not have as much catnip in it as you need to actually make a difference.

To be honest, it’s not so much the amount of catnip, it’s the lack of the nepetalactone chemical within catnip spray that is the issue.

Is it possible to give your cat too much catnip?

The concern isn’t so much with the amount of catnip you give. The biggest problem is, over time, if you overuse catnip, it’s unlikely to affect your cat in the same way. They will build an immunity to it.

The reality is not every cat is going to react to catnip at all. Maybe 30 or 40% of cats may not react in any way. But, for the remaining population of cats that are affected by it, if you overuse it, in time they’ll build an immunity to it. Meaning, you won’t get the desired effect.

Instead, use it sparingly so that you get the best effect over the long term.

According to kittyclysm, yes cats can eat catnip. They say that catnip is just a herb that is related to the mint plant and oregano herbs. So, essentially it is a natural plant like any other.

These mints and oregano are commonplace, often used in cooking.

Q: Is Matatabi Safe for Cats?

According to Wikipedia, Matatabi is a herb that is known to give a euphoric experience to cats. Similar to catnip.

It is also known as:

According to NCBI, it is safe to use. They don’t have any hard and fast data but are perceived to be similar to the use of catnip.

Q: Can you grow your own catnip?

Yes, you can grow your own catnip. All you need is some good sun and a windowsill to perch the plant on.  You can even consider growing your own cat garden.

This can consist of the catnip itself alongside other plants and herbs so that your cat can enjoy playing in that particular garden. Which may keep it out of the beloved main garden that you want to keep reserved for your fruit and veg.

Just be mindful,  if you plan to integrate catnip into your normal garden, with your other fruits and veg, it will grow quite vigorously and you just need to consider that to your garden plan.

Yes, that is what they are made for (Click here for Best Pheromone Collars for Aggressive Cats). But it really depends on which product you get and how you use it. There is also a chance that some cats may not see the same effects as others. Similar to catnip that I discussed earlier.