Fitbit Smells Like Cat Pee (Is it Really Cat Pee?)

If you have noticed that your Fitbit smells like cat pee you may be wondering why it smells like this, and how you can stop it from happening (Click here to see the price, on Amazon #Ad).

Due to the Fitbit being made of elastomer materials, bacteria can build up easily underneath this, and after it is left to sit there for a while, it can start to smell like cat pee. If however, you do own a cat and are positive that the cause isn’t a build-up of bacteria, do keep in mind it is entirely possible that your cat might have tried to “mark its territory” on your Fitbit.

So, now you know why your Fitbit may be smelling like cat pee. But, how can you keep it smelling fresh? Could the material of the wristband be an issue? Do cats ever really pee on Fitbits? Keep reading for these answers, and much more.

Contents show
1 Clean & prevent cat pee smells on your Fitbit
2 What is a Fitbit?
3 Why do some people think their cat has peed on their Fitbit?
4 How can I keep my Fitbit smelling fresh?
5 What material does the Fitbit wristband have?
6 Can this material cause bacterial build-up to make it smell?
7 Would switching to a leather wristband help?
8 Do cats ever pee on Fitbits?
9 Why do cats pee on Fitbits and other household objects?
9.1 Territory marking and stress
9.2 What causes your cat stress
9.3 Signs of physical illness
9.4 Possible Root-causes of cat stress
10 How can you control where your cat marks its territory?

What is a Fitbit? 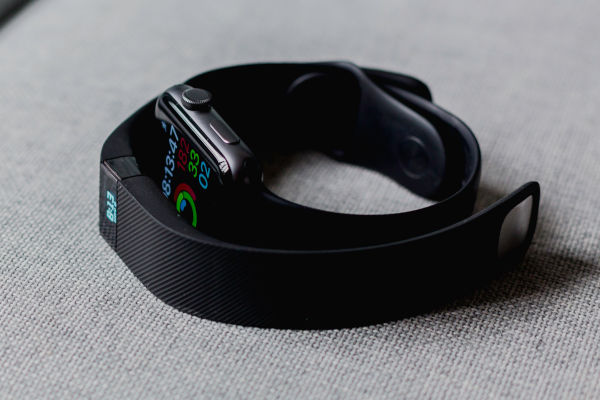 Fitbit is a company that manufactures devices that go on your wrist, very similar to a watch, except they do much more than just tell time. Fitbits are health and wellness monitoring devices, used by active people to track a variety of health factors.

Originally, Fitbits were just for seeing how many steps you had taken over the course of a day, and the actual device was relatively small, but today, Fitbit manufactures a variety of smartwatches, as well as much more affordable miniature devices for those hunting for a budget.

In addition to telling time and monitoring your steps, Fitbit watches can count:

Why do some people think their cat has peed on their Fitbit?

You use your Fitbit all of the time, but recently you’ve started to notice that it smells like cat pee, right? There can be a few reasons for this, some of which may or may not apply to you.

First of all, if you don’t have a cat, it is safe to assume that it is NOT actual cat pee. Your hands sweat, I’m sure you’ve noticed it if you’ve gotten nervous, or more likely if you have a Fitbit, exercised.

How can I keep my Fitbit smelling fresh?

Click here to see the reviews, on Amazon #Ad

Regardless of HOW it happened (Which will be explained soon) you probably want to know how to get rid of the smell and keep it that way. Whether it was a cat, or just a build-up of sweat, the cause of the odor, either way, is bacteria.

What item’s selling point is typically being able to kill off 99.9% of that? Hand sanitizer (Click here to see the reviews, on Amazon #Ad). It’s as easy as rubbing it down with a small squirt of hand sanitizer to not only temporarily mask the odor, but get rid of it for good. After your run, maybe give yourself, and your Fitbit a bit of hand sanitizer (Which is all but a commonplace today) and you’ll be good to go.

What material does the Fitbit wristband have?

Earlier, you probably heard me mention that the Fitbit wristband was made of elastomer material. Elastomer material is something that is used by many sports watches, it is extremely similar to rubber but is a bit more durable, especially when it comes to exercising equipment, and contains no latex whatsoever.

Can this material cause bacterial build-up to make it smell?

The short answer is yes. The bacterial build-up itself isn’t enough to make your Fitbit reek of cat pee, but when combined with the elastomer material, a reaction occurs between them, producing the odor.

Would switching to a leather wristband help?

Click here to see the reviews, on Amazon #Ad

The short answer yet again is yes! Not only would switching to a leather strap (Click here to see the price, on Amazon #Ad) help, but it would also eliminate the odor from ever happening completely. This is because the sole cause of the odor is the elastomer material reacting with the bacterial build-up.

Technically the bacterial build-up is still there, and I’m not encouraging you to stop cleaning your watch, but at the very least it wouldn’t smell like cat pee (What if your basement smells like this? Click here) until you did.

Do cats ever pee on Fitbits?

Now onto the concerns of cat owners. To answer your question, yes, cats can and will urinate on a Fitbit. This behavior is not just limited to the Fitbit, or other watches, however.

Why do cats pee on Fitbits and other household objects?

When a cat urinates in something other than its litter box (Assuming it’s trained to use one) it is for several reasons. The go-to for most behavioral scientists is that it is a way for your cat to relieve stress.

What causes your cat stress

As you likely know, stress can be caused by a multitude of factors, the worst of which being psychological and physical illnesses. Though worst-case scenarios, if your cat is scared, jittery, jumpy, or unusually angry, it may be caused by some underlying mental condition.

If your cat isn’t eating right, is unusually apathetic or unenergetic, or the opposite, much more hyper than usual, this could be caused by a physical illness. Both of these should be checked out by a vet in either case.

However, it is also entirely possible that the cause of stress isn’t because of a problem with the cat, however, some underlying factor in its life that is causing it. Take a minute and think, if you were that cat, what could be bothering you? Maybe:

How can you control where your cat marks its territory?

Believe it or not, there are lots of other people that have had these problems, and there are extensive medical guides on the subject. The first step to stopping this marking behavior is to find the reason why.

If you believe it is another pet or animal causing this, try isolating the cat in a room or other area where you know it won’t be able to interact with other animals. If the behavior stops, it was due to stress, however, if your cat continues to attempt to mark its territory, it is likely due to other factors.

There are a few things you can and should do in any situation to either prevent or control your cat from marking: