Do feral cats regurgitate food for their kittens?

If you have been watching or finding yourself interested in feral cats you may have wondered how they feed their kittens.

Do feral cats regurgitate food for their kittens?

Feral cats do not regurgitate food for their kittens. They provide food in the form of milk initially. But when they are older and weaned, they move onto solid food provided by their mother.

Now that you know that feral cats do not regurgitate their food for their kittens. Keep reading to learn if they abandon their kittens when their mother starts to wean them if you should feed feral cats, and so much more.

What is a feral cat? 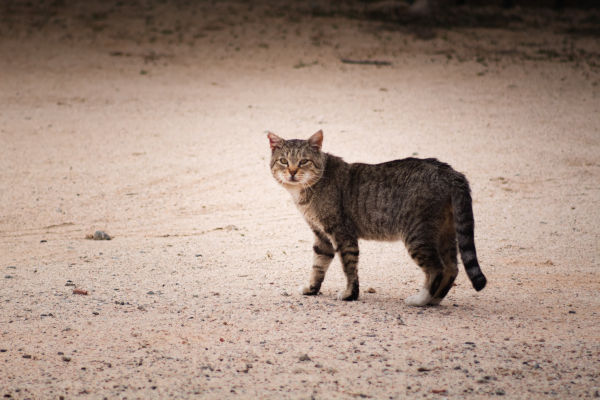 A feral cat outside.

In this section, I will explain exactly what a feral cat is. The chances are you may already have an idea of what they are, but this will ensure we are on the same page.

A real cat is an unowned cat that is left to run wild. They usually run from humans and avoid contact at all costs. This is based on fear, probably from bad experiences they have had or seen from us.

Some of these feral cats have been feral from birth, or some have been domesticated but ran away (more on this later).

They are known to become aggressive if they are approached. But, this is more of a protective measure because they feel threatened by you.

Now that you know what a feral cat is, why they are fearful of us humans, and how they have often found themselves in this situation.

Do feral cats abandon their kittens?

In this section, I will explain if feral cats abandon their kittens. Maybe you have seen a kitten left behind by its mother and wondered if it was abandoned.

Feral cats will not abandon their kittens unless it is in extreme circumstances. Such as a life-threatening situation, which leaves her no choice, are you with me?

In the animal kingdom, it is generally expected that a mother will care for its young at all costs, and feral cats are no exception.

Mother feed their kittens regularly, and while their kittens are dependant on them, their priority is to keep the fed and protected.

The only time you may expect to see the kittens unattended is when the mother cat is searching for their food. But, this is usually not for very long.

In summary, feral cats do not abandon their kittens and make sure that their kittens are well fed and protected until they leave (more on this later).

What do feral kittens eat? 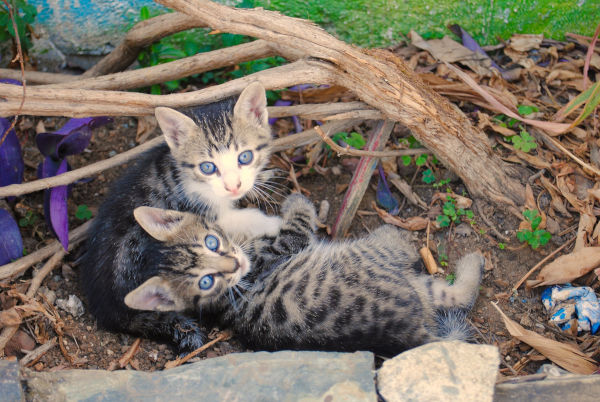 In this section, I will explain what ferals kitten eat. You may have wondered what they consume when they are in the wild like this.

Kittens heavily rely on their mother for their first 8 weeks. During this time they will suckle milk from their mother. Following this, they will be weaned onto solids (more on this later).

Maybe you have seen a cat trashing a bin (Click here to learn how to stop this) bag in your neighborhood before? Well, the chances are this is a mother cat looking for scraps for her kittens.

In summary, kittens drink their mother’s milk and eat whatever scraps their mother can eat when they are older.

What age do feral cats wean their kittens?

You may have wondered when feral cats wean their kittens and what this may mean. Therefore, in this section, I will explain when this is and what it is.

Weaning is the process of transitioning a kitten (or baby) from milk to solids. Similar to human babies, there becomes a time when they need to move on from their mother’s milk and prepare for the food they will eat as adults.

When does this happen?

This typically happens between 4 and 8 weeks of a kittens life. This is, coincidently, one of the best stages of their life to transition from a feral cat to a domesticated cat (more on this later).

In summary, weaning happens within the four to eight week period of a kittens life and is the best time to consider taming them.

Should you feed a feral cat with kittens?

In this section, I will explain my opinion on feeding feral cats. Many people see these cats and feel guilty. The first instinct is to give them some food, but is this the right thing to do?

Feeding a federal cat is not always allowed in some areas. Some councils or local authorities can fine people for doing it. However, in other places, there are no issues. But, then you have an ethical dilemma if it’s a good idea, right?

Some say that it is better to help them with health care, rather than food, but it is an ongoing debate with strong cases on either side.

It’s similar to feeding the homeless, should you give homeless person money? Will it be used wisely? Or, should you be helping them find housing, that will help them get on their feet and feed themselves in the future, are you with me?

In summary, feeding a feral cat is not a black or white answer, if your local authorities are ok with it it’s up to you to decide if you feel comfortable with it.

Can a feral kitten become a house cat?

In this section, I will explain if a feral cat can become a house cat. You may have been considering a new cat and wondered if it would be wise to rescue one of these cats instead. If so, keep reading.

Yes, a feral cat can become a house cat. But, in most cases, it’s quite difficult. This is because they are very fearful of us humans, so domesticating them will be very difficult.

However, if you have found a kitten that is in its weaning period. As discussed earlier, between four & eight weeks. It can be a great opportunity to help a feral cat.

Also, if its an adult cat that was once domesticated, but ran away. You can try and help one of them. But, be warned, it’s not easy.

In summary, yes, some feral cats can be domesticated, but it is not easy either way.

Will feral cats go away if you stop feeding them?

In this section, I will explain if feral cats will go away if you start feeding them, then stop. Maybe you have taken a shine to one by feeding her, but are wondering what happens if you stop.

Yes, feral cats will eventually go away if you stop feeding them. This is just a natural survival decision. Initially, she will return to your usual feeding spot. But, if you do not provide the food, in time she will assume it’s not happening and search for food elsewhere.

The reality is, feral cats never really make a close bond with us humans unless they are successfully domesticated. You can see this even when you feed them. For example, if you lay their food down, the chances are she will wait for you to go before she claims the food.

This is because she has not got the trust in you, based on her past experiences or perceptions of us humans.

In summary, yes, any feral cat will move on when the food stops. So, unless you want to care for it full time do not take offense.

How long does a feral cat feed her kittens?

A feral cat will continue to feed her kittens usually for up to two months. This will start off with feeding milk, along with the oyther kittens in the litter. Then lead on to weaning the cat on solid foods.

For domestic cats this is similar. However, they have the benefit of assisatnce if needed. for eaxmple offering the kitten gruel as an alternative.

Should I take feral kittens from their mother?

You should not take a feral kitten from its mother. If the kitten has been fully fead and weened by its mother, and her milk source has dried up then some professionals may consider taking the kitten in to help it.

When a kitten is young it needs its mother for support and maternal support. Although you may feel that you are helping, or would like to help, taking from its mother could cause it more harm than good.

At what age do feral cats leave their kittens?

Feral cats start to leave their kittens from 6 weeks old. At this stage some kittens naturally leave on their own. For those that don’t things change, for example the mother will communicate differently.

These communication differences are often grunting, or growl sounds to signify an intruder or a potential problem. These kittens will decode this signal and often run for cover until the mother signals the all clear.

How do you befriend a feral kitten?

If you wish to befriend a feral kitten it will take some time to build trust. You will need to make your prescence known, but do not dive in and try and pick it up.

Instead, you need to be patient. Ideally, let the kitten get curious with your patience and come to you first. Then, through consistancy an pateience it will learn to trust you.

Its possible for a feral male cat to kill a kitten, but its classed as quite rare. However, once a kitten reaches a certain age it is knonw that some male cats may push it away, especially once its reached teh age to start mating.

Can Laxatone be Mixed With Food? (Will it work?)