Do Cats Understand When Humans Give Them Kisses?

If you love your cat and give it regular kisses you may be wondering if they truly understand what is happening.

Do cats understand when humans give them kisses?

Cats, like most domestic animals, enjoy affection and likely understand human kisses as a form of affection. Cats might similarly show affection by bumping their nose or head up against you. Although they might not fully grasp the meaning behind your kiss, if your cat is receptive to the gesture, it likely likes and appreciates it.

So, now you know that they may not fully get it. But, how do cats kiss us, in their own way? Do all cats enjoy kissing? What about the “slow blink”, is this regarded as a kiss too? Keep reading to get these answers, and so much more…

Contents show
1 Do cats understand when humans give them kisses?
2 How do cats kiss humans?
3 Why do cats kiss humans?
4 How does a cat show affection to its owner?
4.1 On their own terms
4.2 Tail up straight
4.3 Kneading
4.4 Purring
4.5 Curl up on your lap
5 Do cats treat humans like cats?
6 Do all cats enjoy kissing?
6.1 Blinks his eyes
6.2 Purring
6.3 Rubs up against you
6.4 Grooms you
7 Do cats like kisses on the mouth?
8 Is the “Slow Blink” a form of cat kiss?
9 Should you kiss an unknown cat?
10 Why you should NOT force kisses on your cat

How do cats kiss humans? 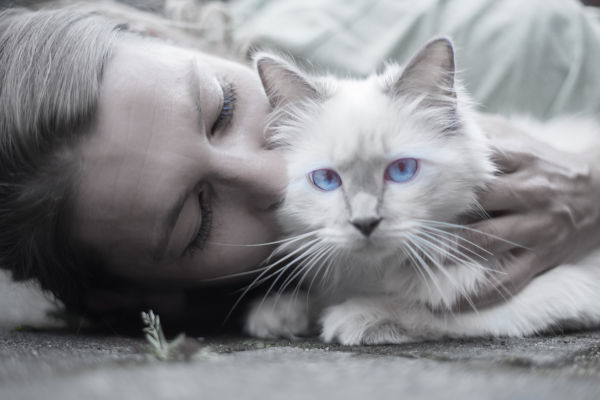 A cat being kissed.

When a cat trusts you and feels close to you, it is natural for a cat to show affection to its human. Cats kiss their humans in a different way. They might stare at their human and blink. That’s equivalent to a human kiss. When your cat really loves you, he is likely to bump his head up against you and rub up against you.

Why do cats kiss humans?

Cats kiss their humans as a sign of their affection and attachment. When your cat gives you kisses, he is claiming you as his own and letting you know that he trusts you and feels safe with you.

How does a cat show affection to its owner?

There are many ways that a cat shows affection to its owner. Cats use their body language and vocalization to let their owners know how they feel about them.

Cats tend to do things on their own terms. Although many people think cats are aloof and don’t care, cat owners know that cats show affection in many ways. They kiss their humans because they love them and they want them to know it. Cats lick themselves and each other, so if a cat licks its owner, he is trying to show him affection.

When a cat walks with its tail straight up in the air, it is a sign that he loves you and that he’s happy to see you.

Your cat may also headbutt (Click here if it also bites you) or rub up against the side of your face to show you that he adores you. He’s also marking you with his pheromones to show that you belong to him. When he rubs up against your ankles, it’s likely because he cannot reach your face.

Another way a cat shows affection is by kneading (Click here if it’s using its nails though). Your cat will do this when he feels content and loved. This behavior also stems from when he was a kitten and nursing from his mother.

Your cat will also purr or meow when he is content. When he does this, he’s letting you know that he’s happy when he’s around you.

Curl up on your lap

Your cat might like to curl up on your lap as a show of affection. If he does this and then slow blinks, it means he is giving you a “cat kiss” and that he loves you. If your cat isn’t a lap cat, it may follow you around the house. He just wants to be near you because he likes being in your presence.

Cats tend to treat their human friends like other cats. They know humans are bigger than them, but they tend to treat us the way they treat other cats. When they like you, they put their tales straight up in the air, rub up against your legs, sit beside you, and sometimes even groom you. Cats will interact with other cats like this as a way to show affection.

Do all cats enjoy kissing?

A cat who enjoys kisses might slowly blink his eyes at you to let you know that he likes it.

If your cat purrs while you kiss him, he is telling you that he enjoys the kiss. He is saying he feels content and safe and likes it when you kiss him.

Rubs up against you

A cat who enjoys kissing will often rub his head up against you. This is his way of reciprocating the affection and marking you as his own.

If a cat enjoys your kissing, he might groom you like he would another cat. So, when your cat licks you, he is telling you that he likes you and that he trusts you.

Many cats don’t like to be kissed on the mouth. They see it as an invasion of privacy. They also don’t like to have your breath that close to their nose or mouth. Kissing your cat on the mouth could also put you at risk for certain diseases. You especially want to avoid this behavior if you are pregnant or have a compromised immune system.

Is the “Slow Blink” a form of cat kiss?

Should you kiss an unknown cat?

If you don’t know a cat very well, then It is not a good idea to kiss it. Even if your cat likes your kisses, it might not be the same for other cats. Kissing an unknown cat could result in the cat swatting at or attacking your face. Cats can also carry diseases. If you don’t know the history of the cat, it’s best to avoid kissing as a form of affection.

Why you should NOT force kisses on your cat

Some cats just do not enjoy kisses. You can tell by your cat’s body language if they do not want you to kiss them. If it is obvious that your cat does not want kisses, you should not force kisses on your cat.

Forcing kisses on your cat can damage the bond that you have. When your cat doesn’t want to be kissed, he might even scratch or bite you. If you force kisses on him, you are telling him that you don’t respect his personal space.

Even if your cat doesn’t like kisses, there are plenty of other ways to show him affection. By not forcing your kisses on him, you are helping him to feel safe. If his body language is telling you that he doesn’t want to be kissed, you should respect that. You could pet him instead or just let him be near you.