Do Calico Cats Meow a Lot? (Or a Weird Myth?)

If you are researching calico cats, or just curious about them, you may be wondering if they meow a lot…

Do Calico cats meow a lot?

A Calico cat can Meow a lot. But, is usually just as talkative as other cats of their breed. Their personalities are just as feisty as other cats. Because they are a type of fur color, rather than a breed, it varies.

So, now you know. But, is this meowing always a bad thing? Are they friendly cats? What things can make a calico cat meow? Keep reading for these answers, and much more…

What are 3 things that could make a Calico meow? 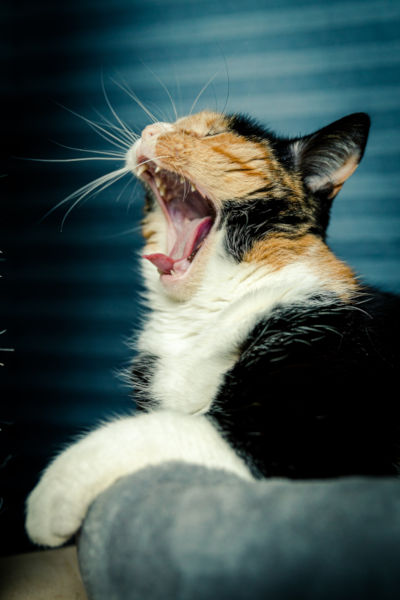 A Calico cat opening its mouth.

Here are a few things that can make a Calico cat meow:

Some Calico cats will meow often to get their owner’s attention. This is a learned habit because they have realized that it will get them the attention they are after. If your Calico cat seems to be happy once you’re giving it some affection then this is likely the reason they were meowing.

If you have an outdoor Calico cat then they may start meowing as a way to let you know they want out. They find this technique effective, especially when you’re sleeping. If your cat decides to wake you meowing before you’re ready then they likely want to go outside.

Sometimes when a cat is meowing frequently it could be from a medical or a serious behavior issue. When cats are in pain they will meow excessively, but it could also indicate sensory defects, neurological problems, anxiety, or aggression issues. Always consult a veterinarian if this is this case.

Is a Calico cat’s meow always a bad thing?

A Calico cat’s meow isn’t always a bad thing. Actually, vocalization is completely normal for cats because it’s how they communicate with us. For example, if a female Calico cat starts meowing excessively it might not be due to a medical issue or pain.

Actually, when a cat goes into heat it may start meowing a lot more (and louder) than usual.

Changes in your home

Another reason they may start meowing a lot is because of a big change in the household. Sometimes after a move, they may meow more often as they get used to their new surroundings.

Transitioning from indoor to outdoor

This is also the case if you are trying to transition an outdoor cat into an indoor cat.

Some breeds are more vocal than others with these changes so there’s a good chance that your Calico may start to meow a lot.

Do Calico cats meow at other cats?

However, a lot of indoor cats haven’t got the memo and have gotten in the habit of meowing at other cats.

If your Calico cat does meow at other cats they are likely just being playful and not actually speaking to them. However, they may meow loudly to communicate to other animals if there is prey around and they want everyone’s cooperation.

How should I train my Calico cat to not meow for food?

Some Calico cats will meow a lot due to learned behavior. If they want something from you and can get it by meowing, they will continue this habit.

This is why some cats meow frequently when they want more food. The good news is if your cat meows for their food whenever they please there is a way to curb this behavior.

When it’s time to feed them, have your food in hand by don’t give it to them until it stops meowing. Once they stop meowing, take a step towards their dish with the food.

02. Freeze and count to 5 if this happens

If they start to meow again, freeze with the food and count to 5. Continue this until they stop meowing. It may take a few tries but it should teach them not to meow for food.

Cats usually don’t meow like other cats because they don’t need to meow, to begin with. Meowing isn’t how cats communicate with one another. It stems from a habit when they were kittens.

To get their mother’s attention, kittens would make the meow sound. They will continue to use that call to people when they need something.

This is why feral cats who were adopted as adults often don’t meow. Once they got a bit older they had no reason to reason to meow, so they likely forgot how to. This could be why they don’t sound like other cats.

Calico cats have big personalities. Actually, they share similar personality traits as tortoiseshell cats which are known for their spunky and independent spirits.

While some people think they display plenty of attitudes, most people find their Calico cats to be extremely loveable.

If you treat them right, Calicos will give you unconditional love. They can be very loyal to their owners, and love to get cuddly. Calicos are very sweet and friendly cats, no wonder so many people want them as pets.

Do all Calico cats chirp?

Sometimes a cat makes a sound that is more like a chirp than a meow. This is nothing to be alarmed about. Although we don’t know the exact cause for this, it is very common among Calico cats. Actually, it’s normal for all different types of cats to make this chirping sound.

Are Calico cats more likely to hiss than other cats?

This is because they share many of the same personality traits as tortoiseshell cats. Vets from UC Davis reached out to 1,200 cat owners to survey cat behavior.

If another cat upsets your Calico cat then they are likely to hiss at them. When they get upset enough they could also chase,  scratch, or even bite.

Even though these cats are loveable when they are in a good mood, you don’t want to be the one to cross them. The same can be said for other cats who upset them as well.

Why is my cat meowing in the bathroom?

Your cat is meowing in the bathroom because it wants to come in and hates closed doors. In most households, every room has an open door policy. Every room except for the bathroom that is.

Does your cat seem very curious about the bathroom? Maybe they start meowing (what if it squeaks? click here) every time someone goes in there. Try to put yourself in the Calico cat’s position if you’re curious as to why they are doing this.

Almost every time someone slips into that room they close the door behind them. This leaves your cat wondering what’s going on in there. They feel left out, so they’ll start meowing to get in there and see what’s going on.

If they continue meowing once they get in there it’s likely their way of letting you know they weren’t impressed you closed the door on him.

Some people are also under the impression that there are better acoustics in the bathroom which is why cats enjoy meowing in there more than in other rooms. It seems like many cats have a fascination with the bathroom, it’s not just a Calico thing.