Can you cat-proof your rat trap?

You can cat-proof a rat trap. The best solutions are to replace it with an electronic no-see trap or a smart-trap version. These protect your cat and are more humane than a standard rat-trap. Meaning, you can avoid accidental damage to your cat.

Use These Rat-Traps To Keep Your Cat Safe

So, now you know. But, can you train a cat to stay away from it? Why do cats like these traps? What could they potentially do to a cat? Keep reading for these answers, and much more…

What is a rat trap?

A rat trap is a device designed to attract and catch rats. They are often designed similar to a mousetrap, only larger. The base is made out of wood, and a piece of bait is placed on one end.

When the rat comes to eat the bait, it triggers the trap. A metal spring is released and is usually strong enough to kill the rat on contact.

Another form of rat trap that is more humane is rat cage traps. The rat will be lured into the cage to catch the bait. However, once they are inside the cage door closes so the rat doesn’t get hurt.

There are also rat cages that have an opening shaped like a funnel. The rat can enter, but the opening is too small for them to escape.

Can you train a cat to stay away from your rat trap?

It can be very tricky to train a cat to stay away from a rat trap, especially if they are curious about the bait you’ve chosen. If a cat becomes curious about a rat trap there’s a good chance it could get hurt. You will want to curb that curiosity before they get a chance to experience this for themselves.

Many people don’t agree with spraying your cat with water, but when it comes to rat traps you don’t want to take the chance. You may have to resort to giving your cat a squirt if they are attracted to the rat trap so they begin to view the trap as a negative thing.

You can also try to divert their attention to something more appropriate to play with. Every time this works, reward them for their good behavior.

How to cat-proof your rat trap:

Here are some simple ways to cat-proof your existing rat-trap, or replace it with a one designed this way…

These traps are great because they protect your cat. But, not just this they also make it more humane by not having to see the dead rat, or mouse in the trap after.

These smart tamper-proof cages bait the rat or mouse into the trap and keep your cat out of it. Meaning it is designed for homes with pets making the ideal cat-proof rat-trap replacement.

Keep the rat trap in a location where your cat can’t get at it. Cats are great at fitting in small spaces, and very persistent when they are curious about a new spot.

You may have to get creative with your locations. Try tight areas, such as behind the fridge or oven.

You may have to completely hide it so your cat doesn’t risk touching the trap. Pantries, cupboards, and other areas where your cat won’t spot it.

If you’ve pinpointed the location of the rat (or where it likes to come out) put the rat trap in that area and close it off so the cat can’t get in there. 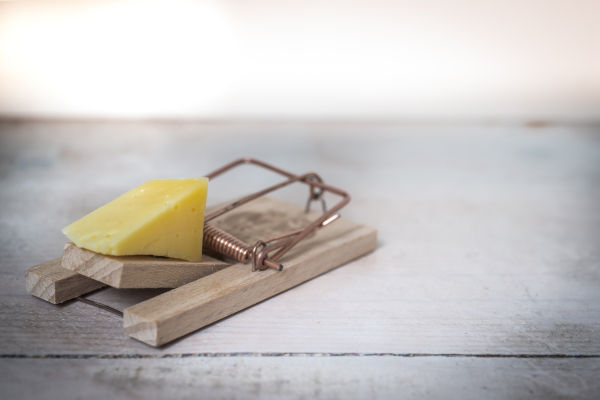 A rat trap with cheese in it.

Your cat may be attracted to your rat trap because of the bait you’ve chosen. For a rat trap to be effective, you will need to place some sort of food on it as bait.

This food scent is what attracts the rat over to your trap. While this is effective at attracting rodents, it also could attract your pet.

One of the most common ingredients people use on their rat traps is cheese. Cats love dairy products, so any cheese products will likely spark their curiosity.

What can a cat do to your rat trap?

A cat likely won’t do very much to your rat trap. However, if they are lingering around your trap the rat won’t go anywhere near it. For the rat trap to be effective, you need to keep the cat as far away from it as possible. Rats are terrified of cats and won’t come out to play if one is in sight.

You will have better luck trapping the rat quicker if you keep your cat in a separate room, away from the trap. Not only will you catch the rat quicker, but your pets will also be safer.

Could your cat injure itself on your rat trap?

Depending on the type of rat trap you have, there is a possibility that your cat could get an injury. If your cat goes for the bait with its paw, it could trigger the spring trap.

When this happens, the spring clamps down very strongly. These springs have enough force to kill a rat upon contact, so they could seriously injure a cat’s paw.

A cat likely won’t injure itself on a rat cage trap because it’s too big to fit inside. The only type of rat trap that poses a threat to cats is the traditional spring rat trap.

Should you discipline your cat for touching your rat trap?

You shouldn’t need to discipline your cat for touching the rat trap because they are not doing it to misbehave. They are more than likely curious about the bait you have chosen for the rat trap. If your cat can touch the rat trap then it’s your responsibility to move the trap to a safer location.

As a pet owner, you need to make sure your home is safe for the pet. This includes making sure dangerous devices, such as rat traps, are kept in areas where the cat won’t be able to touch them.

Are cats attracted to the cheese on the rat trap?

Cats love cheese just as much as rats do, so they will likely be attracted to the cheese you use. If you have cats, try using a different ingredient on your rat trap. Cheese isn’t the only food they like. Actually, it isn’t even their favorite. Most people think cheese works best for attracting rats because it’s the most potent.

Rats actually prefer peanut butter, which is great because most cats don’t care about peanut butter. Other foods that attract rats (but not cats) are fruit, vegetables, cereal, and meats. As far as meats go, most people have success with bacon in their rat traps.

Do you even need a rat trap with a pet cat? 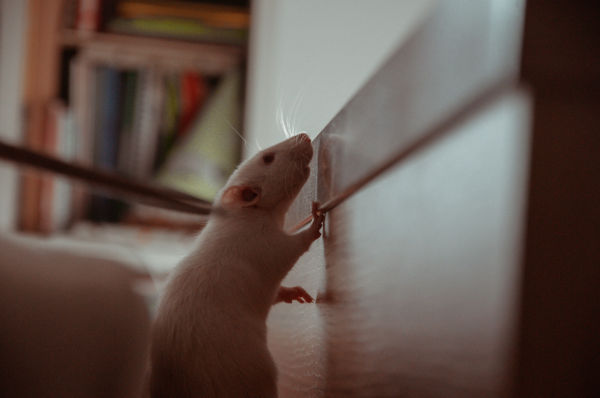 A mouse in a home.

You will still need a rat trap even if you have a pet cat. Cats aren’t all that great at catching rats. It’s quite often the scent of a cat is enough to keep rats away, but if a rat does make its way into your home then your house cat likely won’t be up for the job of killing it.

Not only is your spoiled house cat a lousy rodent killer, but they’re much safer if they sit out on the job too. Rats are known to carry a lot of diseases that can easily be passed onto other animals.

If a rat does come into your home, it’s safest to keep your cat as far away as possible. Rat traps are a much safer option for getting rid of rodents.

Cats are not that great at rat-catching…

Most people think of cats as the ultimate rat hunters, but they are shockingly bad at killing rats. You don’t want to leave rats (or any other rodents) hunting for your cat either because they can easily transmit diseases.

Rat traps are effective at catching and killing pests, but you will need to catproof them so they don’t hurt your furry friend.