Is cat pee on horse hay a problem?

Generally, not at all. Hay stored in a barn will get urinated on from time to time, sometimes by the cat, sometimes from humans in the barn, and sometimes even from the horses. Rats and other animals sneak in too, as it’s relatively easy to get inside the barn and subsequently into the warm, soft hay.

So, now you know. But, why does this happen? Should I just ignore the cat pee? How can I prevent this from happening? Keep reading for these answers, and much more…

Contents show
1 Is cat pee on horse hay a problem?
2 Is cat pee on horse hay a common issue?
3 Why do cats pee on hay?
4 Should I just ignore the pee on my horse hay?
5 How can I prevent cats from peeing on my horse hay?
6 Do barn cats pee in hay?
7 Are neutered cats less likely to pee on hay?
8 Do horses and cats get along?
9 Is cat poop bad for horses?
10 Why is it a bad idea to use horse bedding at cat litter?

Is cat pee on horse hay a common issue? 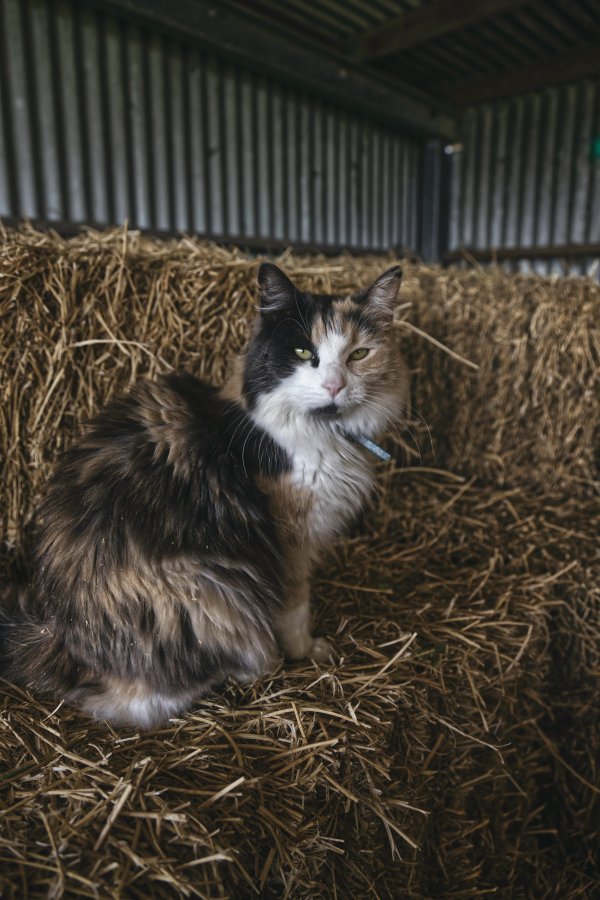 A cat in a barn sitting on hay while staring.

While it’s not pleasant to think about, this happens often and should not cause any ill effects, provided that this is not a frequent habit occurring with multiple cats, instead of one. The worst scenario is that your horses might avoid some small, more fragrant patches that haven’t aired out by the time that the hay is placed out as feed or as edible bedding.

Feces is a different story, but as far as urine goes, any possible diseases that a cat could spread are most likely not going to be transferrable to equines, so while it’s unpleasant when your cat or a random stray finds their way into the hay pile and urinates, it should not pose a health risk to your horse.

Why do cats pee on hay?

Cats are neat little creatures and hay is an ideal spot from their perspective when it comes to a makeshift litterbox. The hay is soft but firm, and it’s also clean and warm. Add in that cats seem to enjoy the texture of the straws and you’ve got a definite temptation stirring in your cat for using the hay pile for a potty break.

If the problem is with strays, your best bet is going to be utilizing some citrus spray to repel the cats, as they really seem to dislike the smell. Furthermore, citrus is non-toxic to horses, and some even like it. Just don’t spray large concentrations in one area, just a little on top and at the bases to keep the kitties at bay.

Too much citrus concentrated in one area could irritate the corner of the mouth and the lips of our horses – not from toxicity, just the natural acidity of citrus fruits.

Should I just ignore the pee on my horse hay?

That is up to you, but it may be best to strategize a means of securing the barn against cat intrusion if at all possible. This will minimize the chances of them getting in and stinking up the hay, but if they do it’s not the end of the world.

Horses will still eat the hay, but they’ll definitely notice the difference, and probably eat less enthusiastically – so it’s not a very good scenario. If it’s all possible, try to secure the barn more effectively or you might simply consider some plastic tarping to place over the hay to protect it from any cats that might into the barn.

It’s a makeshift solution at best, unfortunately, as cats are agile and expert climbers and tend to find their way inside. At least with the plastic, damage should be kept at a minimum, and if you are lucky then patching up any potential kitty doors into the barn will do the trick and keep them out altogether.

How can I prevent cats from peeing on my horse hay?

There are definitely a number of strategies that may be employed for keeping cats from using your hay piles as a potty. The first and most obvious is to block access to the hay.

This can be done by securing the barn, installing a motion sensor with dog-barking sounds, or if you have outside dogs then you might even move on into the barn (just keep in mind that your dog might pee there, too!).

Next, you can house the hay in a more secure storage space that you can build or purchase pre-fab and install on your property, which will be better-suited than your barn for keeping the hay safe and isolated.

Finally, one trick that might work as well is simply putting a clean, fresh litter box nearby. Cats love kitty litter and it’s quite possible that your cat or any strays coming in will make use of the litterbox once they’ve found it instead of ‘doing their business’ in the hay. Distraction is often the best tact with cats, so you might even try this one first

Just be sure to change the box out once it starts getting dirty or those cats will go right back to the hay.

Do barn cats pee in hay? 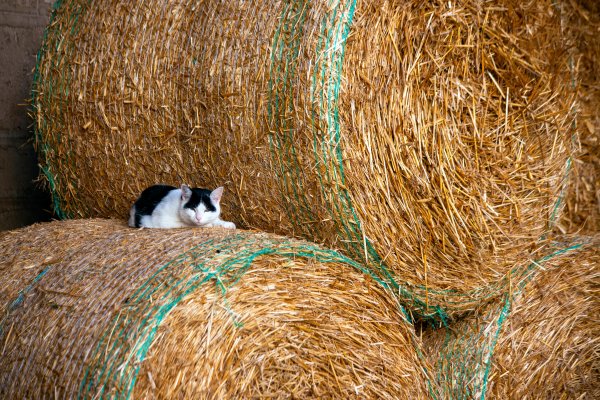 A black and white cat sitting on rolls of hay.

Yes, barn cats like to pee in hay and they also have a fondness for the loose dirt often found in gardens. If the cat is yours, you should consider having them spayed or neutered, as this will generally decrease a cat’s drive to ‘mark their territory’ with urine.

For strays, you can take them in to be spayed or neutered as well, but you’d better wear gloves and protective clothing as these cats will definitely not appreciate what you have in mind. That said, many owners say, spaying and neutering are actually beneficial for a cat’s health, and they say, you won’t have to worry about kittens and subsequently, more cats in your barn!

Are neutered cats less likely to pee on hay?

Yes, neutered cats are much less likely to pee in the hay, although is a big old tomcat is around then they might well still use the hay to mark it and establish their territory. This is natural cat behavior, as they rely on their sense of smell as much or even more than their eyes and ears.

Spaying or neutering the cats will definitely reduce the incidents, however, so it is well worth considering if your cat’s potty habits are starting to become troublesome or even potentially expensive.

Do horses and cats get along?

Cats and horses often get along quite well, sometimes even in cases where the horse won’t tolerate humans. It is not uncommon for horses and cats to strike up a friendship, where they will hang out or even play together and, in some cases, the horse might even let the cat climb up and nestle down on top of its back!

Horses are aware of their size and usually take care not to step on a kitty or its tail (though it can happen from time to time), but we’ve heard numerous stories of cats rubbing against horse’s legs and purring, sitting nearby to watch the horses eat, or cuddling together when the horse is resting in the stall.

It’s a strange and beautiful thing – horses and cats do bond sometimes — and as strange as it seems, they can and sometimes do become the best of friends!

Is cat poop bad for horses?

Yes. While cat urine is not so much a risk, cat poop is another thing altogether. It has been linked as a potential cause for Toxoplasmosis in horses, a condition that can cause cysts and can be further spread in the infected animal’s stools.

Strains of toxoplasmosis vary in virulence, with some being quite aggressive while other strains may inhabit the horse’s or other host’s body while not causing the disease at all.

Perhaps because of their size or simply their Equine DNA, horses are less susceptible to toxoplasmosis than most animals, but cat feces left in a barn or an unchanged litterbox can definitely increase the horse’s chances of contracting this disease.

Why is it a bad idea to use horse bedding at cat litter?

It is better to invest in one or more plastic litterboxes to place near bedding or stored hay if you are having a problem with cats peeing on it (Click here if its done it on your beanbag). This gives the cats an alternative that they are likely to prefer to the hay but if it doesn’t work, consider citrus spray repellent or securing the barn or stable as effectively as possible to keep out the cats.

Why Does My Clumping Cat Litter Not Clump? (+ Tips)

Can Cats Find a Litter Box In The Dark? (This is Why)

Cat Peeing Over Edge of Litter Box (What Now?)

Why Does My Cat Poop When I Poop? (Safety or Stealthy?)