If you have noticed that your cat biting your kittens bum the chances are you are wondering why it is happening and if it is a cause for concern.

Why is my cat biting my kitten’s bum?

Your cat may be biting your kitten’s bum to either show dominance, sexual aggression or maybe inhaling its scent, aggressively. There is a gland that omits scent there. However, it’s more likely to be a show of dominance.

So, now you know why. But, could this be sexual aggression? What is this? Why do cats show dominance in this manner? Keep reading for these answers, and much more…

Contents show
1 Why is my cat biting my kitten’s bum?
2 What is cat sexual aggression?
3 Do cats bite bums for dominance?
4 Do kittens sometimes need help pooping?
5 Do some cats suck genitalia?
6 Why are cats so aggressive when mating?
7 Do cats in heat get aggressive?
8 What do cats do to show dominance?
8.1 01. Hissing or Growling
8.2 02. Urinating (Spraying) to claim territory
8.3 03. Pushing cats around at feeding time
8.4 04. Pushing cats away from their water bowl
9 Should you punish your cat for biting your kitten’s bum?
10 Can a pheromone diffuser help to introduce your kitten?
11 Can a stressed cat become aggressive?
12 Is a male cat more likely to act aggressive?
12.1 Can a new kitten affect the hierarchy in your home?

What is cat sexual aggression? 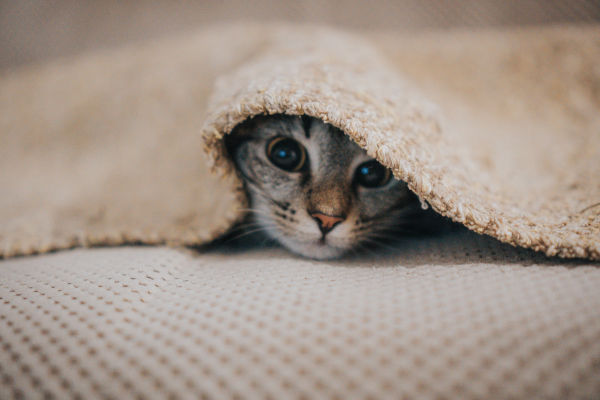 A kitten hiding under a blanket.

Do cats bite bums for dominance?

Cats are known to bite another cat’s bum as a show of dominance. As well as biting other parts of their body. This is just one way that a cat can show that it is the one in charge of your home.

Kittens have a lot of energy and can sometimes irritate the resident cat. Therefore your cat may feel compelled to pull the kitten in line and make it clear who is the boss.

Have you ever pushed your luck with your mother as a child? And, what happened? If it were like my mum, you would have learned a memorable lesson not to mess with her. This is the same for a cat biting a cat’s bum in this manner.

Kittens do need help pooping sometimes. When this happens the mother cat is now to lick the kitten’s bum. As weird as this may sound to us humans this is not an issue for cats.

Do some cats suck genitalia?

Some kittens do suck genitalia. While cats are young (kittens) they have the instinct to suck. This is to help them to get the valuable milk from their mother.

However, if their mother is not there or they can’t get to her they may try and suck on the genitalia of another kitten. This may just be an accident, freak of nature, who knows.

The problem with this is it can harm the victim’s genitalia and they need to be separated. If it keeps happening you may need to keep that particular kitten separate long term.

Why are cats so aggressive when mating?

Cats have an instinct to be quite aggressive when mating. You may see the tomcat pinning the female down and screams from the female cat during mating.

This screaming is believed to be because of the spikes on the tomcat’s penis. When it is entered, it is flat but, then these spikes are activated while it is inside. Which causes the female to scream in this manner and make it look even more aggressive.

Do cats in heat get aggressive?

Female cats are known to become more aggressive during their heat cycle. You may also notice a change in their mood. This change can be the complete opposite of their usual demeanor.

There is no way to control this because it is a natural behavior change caused by their hormones. So, it is not advisable to try and discipline the cat for this mood swing during this time.

What do cats do to show dominance?

Cats show dominance in several ways. This can be seen whether you have just one cat or more than one. Here are some things to look out for:

Hissing or growling is a common display of dominance that is quite obvious to see. This tells the submissive cat to back off and let it claim its territory.

Another obvious attempt to show dominance is by claiming territory. This is typically done by spraying their scent onto an area to claim it. This will mark their scent to keep other submissive cats away.

03. Pushing cats around at feeding time

If you have more than one cat you may have seen one of the cats acting aggressively during mealtime. This can be a show of dominance. However, this could also be food aggression, but that is a topic for another day.

04. Pushing cats away from their water bowl

Similar to the food bowl you may see the dominant cat acting aggressively around the water bowl. This sends a message that they are in charge and must get what they want first.

Its a bit like a school bully pushing in line for school dinners, they want to get served first, are you with me?

Should you punish your cat for biting your kitten’s bum?

You should not push your cat for biting your kitten’s bum. If you notice this happening you may want to punish the cat to teach it a lesson. But, it tends to confuse the cat. This can then lead to a defensive attack or a breakdown of trust for you.

Once you lash out at a cat it is not intelligent enough to connect your action to its behavior. Firstly, it may feel it is doing nothing wrong. And, lastly, it may not associate it as punishment for that act even if it did, are you with me?

Can a pheromone diffuser help to introduce your kitten?

A pheromone diffuser (Click here to see the reviews, on Amazon #Ad) can help to introduce a kitten. However, it can also be used going forward to calm an aggressive atmosphere.

These pheromones are known to cause a chemical calming effect on some cats that can be beneficial for cat owners. Hence the reason why they are quite popular.

Can a stressed cat become aggressive?

A stressed cat can become aggressive. This can happen with a dominant cat and is often referred to as displaced aggression. So, your cat could get chased home by another cat then take out its stress on one of your other cats.

If you have ever been in an office environment and seen a co-worker get told off by their boss. Who then becomes stressed for the rest of the day and takes it out on other co-workers. This is the same thing as cats displaced aggression.

Is a male cat more likely to act aggressive?

Generally speaking a male is more aggressive. Especially when paired with another male cat. They are known to battle for dominance and over a female to mate with.

This behavior is not just reserved for cats other animals tend to have this same behavior including humans who are likely to fight over a girl that they like.

Can a new kitten affect the hierarchy in your home?

IF you have multiple cats the arrival of a new kitten or cat (Can they be left alone together?) can affect the hierarchy. In some cases, you may see different behaviors on a room by room basis.

So, one cat could act dominant in one room then act submissive in another. The reality is the kitten will almost always be assumed to be the submissive one in any room due to its size.

But, some kittens can be quite pushy and antagonize the other resident cats making them either lash out or not want to be around it.