Cat Ate Bacon Grease (What Now? Is it Dangerous?)

If your cat has eaten bacon grease you may be wondering if this is normal, is it dangerous, or what you can do to stop it?

Why did my cat eat bacon grease?

While cats are often notorious for being picky eaters, there are some cases where they will eat anything that their owners give them. If you put bacon grease in your cat’s water bowl there is a good chance that they wouldn’t even think twice about drinking it. Given the opportunity, a cat will go after something that you left out whether you offered it to them or not.

So, now you know why this has happened. But, how can you prevent it? What can happen if your cat eats this grease? Is bacon loaded with sodium? Keep reading for these answers, and so much more…

Contents show
1 Why did my cat eat bacon grease?
2 What is bacon grease?
3 How can you prevent your cat from eating bacon grease?
3.1 Using a pantry
3.2 Cover it well
4 Is bacon grease bad for your cat?
5 Why is bacon not good for cats?
5.1 Excess sodium is not good
6 What can happen if your cat eats bacon?
7 Is butter healthier than bacon grease?
8 How can you help your cat if it gets diarrhea from this?
9 Is bacon loaded with sodium?
10 Is turkey bacon any better than pork?

What is bacon grease? 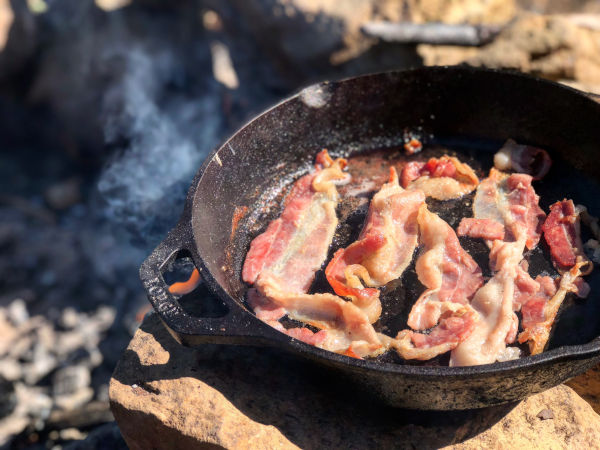 There is a lot of fat on bacon, and when you cook a raw slice of bacon that fat liquifies. That is what bacon grease is, liquid bacon fat. Once it has had time to cool down, the bacon grease will solidify into a lard-like substance. In addition, bacon grease is an integral part of cuisine in various parts of the world.

The versatility of bacon grease allows for it to be used to make a lot of things. From frying food in it to making sauces, there is a lot that you can do with a little jar of bacon grease. While bacon grease is a great thing to cook food in, it is not something you should be giving to your cats.

How can you prevent your cat from eating bacon grease?

Just keep your bacon grease in a place where the cat can’t get it. The solution really doesn’t get any more simple than that. Cover up the bacon grease and put it in the fridge. Unless your cat has somehow gotten opposable thumbs, they will not be able to open the fridge to get the bacon grease.

For good measure, try to keep your bacon grease in something that is hard for the cat to get into (like Tupperware for example).

If you don’t have a pantry and you need to keep your bacon grease on the counter, one thing you can do is cover it with a lid of some kind and then keep the container in the middle of a piece of aluminum foil. Most cats do not like the feeling of aluminum foil on their feet and will avoid it.

Is bacon grease bad for your cat?

Bacon grease is really bad for your cat. Large amounts of fat and grease were never intended to be part of their diet. If they happen to get a large helping of bacon or bacon grease, it is very likely that it will cause an upset stomach for your cat. If that happens there is a good chance you’ll be finding diarrhea and vomit all over the place.

As far as a timeline goes, if your cat is going to be sick enough to vomit from sipping on bacon grease you can expect to see that happen within 24 to 48 hours typically.

Why is bacon not good for cats?

While cats do have some slight tolerance for fat in their diet, bacon has far too much fat. Aside from the immediate issues of an upset stomach and possible vomiting, copious amounts of fat are very bad for your cat’s health.

Not only that, but bacon is packed with an unhealthy amount of salt. While the fat content of bacon is not good, the sodium content is what really makes bacon not a great choice of food for cats.

Excess sodium is not good

Sodium in small portions is good for your cat’s overall health, but that doesn’t mean it is a good idea to give your cat little chunks of bacon in their dry food. Just like with fat, excess sodium is bad for your cat’s health in the long term picture.

What can happen if your cat eats bacon?

As mentioned above, if your cat eats an excessive amount of greasy bacon it is likely that your cat will get an upset stomach. After that, there is a chance that your feline companion will be having bad diarrhea and puking all over the place.

If your cat manages to only get a bite or two of some bacon, it is less likely that it will make them noticeably sick.

Your cat is also able to eat a slice of raw bacon with no issue. The reason for this is because raw meat is, obviously, what they would be accustomed to eating out in the wild. That said, your cat really shouldn’t be eating any bacon. Not even a small piece here or there, regardless of if it is cooked or not.

Is butter healthier than bacon grease?

While it isn’t recommended to be handing your cat a stick of butter (Is this OK for them? Click here), even a small bit of butter is going to be arguably better for them than bacon grease.

It still doesn’t make it a healthy thing for your cat. You should only be giving your cat food that is intended for them or at least only giving them food that has been approved by their vet.

How can you help your cat if it gets diarrhea from this?

While the symptoms your cat is experiencing from eating bacon grease will clear up over time, you may be wondering if there is anything you can do to help them along on their road to recovery.

The good news is that there is one thing, in particular, you can do to help your cat. If you increase the amount of fiber in your cat’s diet for a few days it will help make your cat’s stool firmer.

A good way to provide your cat extra fiber is to give them approximately one teaspoon of canned pumpkin no more than three times a day. After doing this for several days you should begin to notice a difference in your cat’s bowel movements.

Is bacon loaded with sodium?

Without a shadow of a doubt, bacon is loaded with sodium. Like any meat that has been smoked or cured in any way, there is going to be a ludicrously large amount of sodium. Not only that, but bacon is loaded with fat and calories. These are the kinds of things that your cat should have in small quantities.

A couple of bacon-flavored treats every now and again is perfectly fine, but do not make anything remotely involved with bacon a part of your cat’s regular diet. Like with humans, it is important to have unhealthy foods in well-controlled moderation.

Is turkey bacon any better than pork?

If you still want to give your cat some bacon, but you want it to be as healthy as possible, then your best bet would be to use turkey bacon instead. The reason for this is because turkey bacon is a leaner meat than pork.

There is less fat in lean meat, but there will still be some grease. Even then, turkey bacon still has an unhealthy amount of sodium and fat. Neither of which is good for your cat.

It doesn’t matter if your bacon grease comes from turkey or pork, it is better for you to just avoid giving it to your cat altogether.