If you have noticed some behavioral changes in your cat since having kittens, you may be wondering why this is happening…

Cats might act weird after having kittens while adjusting to motherhood. In some cases, cats can become sick after giving birth, though it’s not always common. The best way to prepare for these changes and know what behavior is concerning is to establish a relationship with a vet as soon as you notice your cat is pregnant.

Is It Normal For A Cat To Act Weird After Having Kittens? 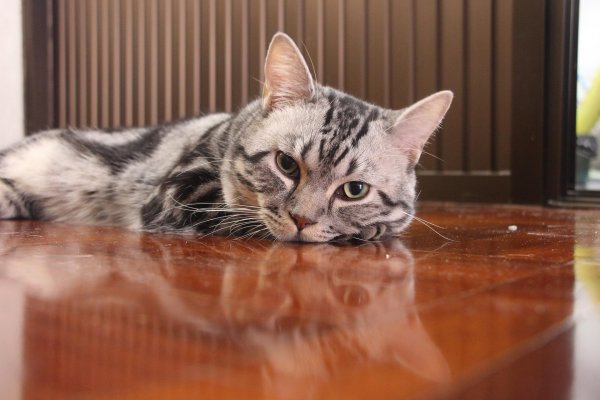 A black and gray cat indoors lying on the floor.

It is normal for a cat to act weird to a certain extent after having kittens. She may act differently than she used to, as she is tired, experiencing many chemical changes in her body, and she is trying to adjust to her new normal with kittens.

Birth isn’t a comfortable experience for cats, and neither is nursing and caring for kittens. It takes a lot of energy, so it’s no surprise that your cat may not seem as patient or energetic as she once was. As long as she doesn’t seem to be sick and is continuing to eat and drink, it’s likely her behavior changes will be very temporary.

How Should A Cat Act After Having Kittens?

Cats can act in several ways that may seem strange to us but are normal for cats. For example, cats will often move their kittens from spot to spot until they find a quiet space, don’t have a draft, and offers warmth and isolation. She will also likely groom her cats a lot and may seem to be somewhat rough with them on occasion.

Unless you can see the kittens reacting as if they are in pain, do not worry at all; your cat is teaching her kitten important skills that they need to know for when it’s time to say goodbye to mom.

Mom might also leave kittens alone for a short amount of time to get some rest; she will almost always come back when her kittens need her unless something is wrong.

Why Do Some Cats Act Aggressive After Having Kittens?

Some cats can become aggressive after having kittens as their hormones have undergone extreme variations in a small amount of time. Your cat is also very tired after going through the process of giving birth, but can’t always get as much rest as she needs as she has new little lives to take care of.

It’s important to trust that your cat knows what she’s doing when it comes to caring for her kittens, and you should give her the space and quiet to do so. You should only intervene in situations where your cat is completely ignoring her kittens, which doesn’t happen often.

What To Watch For After Cats Give Birth 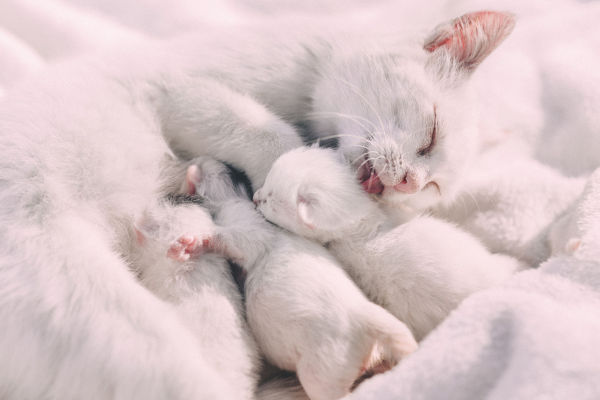 Your cat is likely going to want some space and some quiet once she has given birth. Be sure she has plenty of food and water, but try not to fuss over her too much. You will want to check on her and the kittens periodically to ensure everyone looks well, and make sure that mom is feeding her kittens.

How Long After A Cat Has Kittens Can You Touch Them?

You need to pay very close attention to your cat’s cues before touching her kittens. You don’t want to cause any extra stress for your cat, as she knows how to take care of her kittens. If you give them some slight pets for a minute or two if mom allows, they will appreciate it, but try not to pick them up until they’ve grown a bit.

Should you have any concerns about a particular kitten, it’s okay to intervene, but you should speak with a vet to know what signs to look out for before getting concerned and handling kittens before their mom is ready for you to do so.

Do Cats Get Sick After Giving Birth?

Birth is a very physically demanding process for cats, so it is possible that cats can get sick after giving birth. There’s a strong likelihood that you’ll recognize that something is off with your cat if they’ve become sick, so you’ll be able to seek appropriate medical care.

If she is not eating, she’s becoming physically sick, or she seems to lack interest in her kittens, it’s possible that your cat is not well. You should look out for any discharge or strange odors coming from her crotch area, and continue to monitor her for a couple of weeks. When in doubt, give the vet a call.

Do Cats Get Postnatal Depression?

Cats get similar rushes of hormones that humans do after they give birth, meaning cats can develop their form of postnatal depression. These hormones also continue to change after the kittens are born, which can have a big impact on a cat’s emotions and wellbeing.

While cats do have their type of maternal instincts in that they know how to care for kittens, they do not have the same types of lifelong bonds that humans have with children.

Maternal aggression is very temporary, and will often start to dissipate when your cat’s kittens start to become more independent. This often happens when kittens are around four months old.

Can You Leave Newborn Kittens Alone?

You do not want to fuss over a mom and her newborn kittens, but you should be checking on them throughout the day for a while. It’s never recommended that you leave newborn kittens unattended or inside the home alone, even if the mom is around.

However, if you happen upon stray kittens, check if the mom is close by. She likely is, and she may just be off looking for food. Check on the kittens from a distance for a few days, and only intervene if the kittens seem to have been abandoned.