Can Maine Coon Cats Eat Tuna? (Or Is It Toxic?)

Maine Coon cats can eat tuna, but it should not be the main part of their diet. They love to eat it, especially canned tuna that is meant for human consumption. It can be given to them once in a while as a treat, but there are risks to feeding them too much tuna.

So, now you know. But, are there any health benefits of tuna? What about risks? Should you feed this to a Maine Coon kitten? Keep reading for these answers, and so much more… 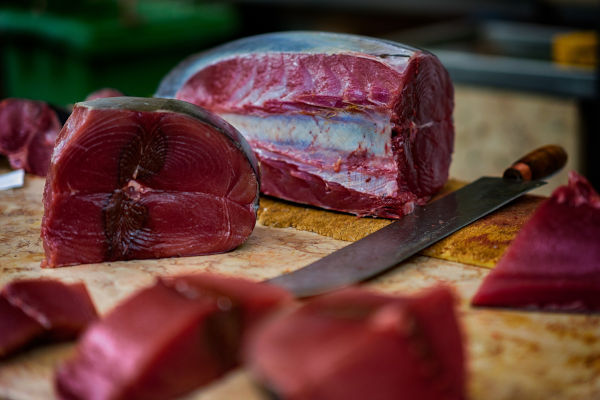 Tuna is an extremely common saltwater fish found in many oceans in the world. They are an excellent source of food and are commonly fished in large numbers in order to provide large amounts of food all over the world.

Tuna can be prepared, preserved, and served in many different ways. Most commonly, it is served as steaks, in a lad, in sandwiches, and can even be made into sushi (what about the wasabi in it? click here)! It can be kept for long periods of time either frozen or in many cases, canned.

Canned tuna is one of the most popular foods in the grocery store. The aisles contain many different brands of tuna for both humans and cats, and, for better or worse, is often given to cats of all breeds.

The amount of Tuna Your Maine Coon Eats Is Important

There are a lot of good things about feeding your Maine Coon tuna. This ranges from the heart-healthy benefits that it provides to the joy that your Maine Coon will get from eating one of a cat’s favorite foods!

However, you need to be careful with the amount of tuna you’re giving to your Maine Coon! There are relatively high levels of mercury in canned tuna, which can be unhealthy for your Maine Coon cat.

Also, if you make it the main meal you feed them, they will be missing out on a lot of important nutrients a more balanced and appropriate diet could provide.

Tuna is a low fat, high protein fish that is high in omega-3 fatty acids and is very heart-healthy. It is low in calories as well.

This makes it quite a healthy protein, as it is great for building lean muscle, keeping your heart healthy, and keeping fat low, especially when compared to more common sources of protein like red meat. It is also high in vitamins A and D, as well as iron.

However, it is also known, in some cases, to have relatively high levels of mercury in it. This can be unsafe when consumed at high levels.

Are there any health benefits of Tuna?

There are a number of reasons tuna is considered healthy. Firstly, it is high in protein, which helps build muscle and is generally quite important in a balanced diet. This means it can be put into any diet very effectively.

It also has almost no fat. Fat isn’t necessarily unhealthy, but consuming the wrong kinds of fats in high amounts can be very bad for you and lead to heart complications and weight gain. Relacing your normal proteins with tuna can help mitigate this risk!

Tuna is also unique among proteins in that it is very high in omega-3 fatty acids and vitamins that are very heart-healthy. This allows it to not only mitigate the risk to heart health that other proteins present, but actively promote heart health as well.

Are there any health risks of Tuna?

The main health risk of eating tuna in high amounts is the fact that it contains mercury. Consumption of mercury has been linked to a number of adverse health effects, such as anxiety, depression, heart problems, and impaired development of infants and young children.

This all might sound extremely scary, but it will not just happen upon eating tuna one time. Since tuna is so healthy in many other regards, it is fine to eat it in moderation. Just try to avoid eating it every day or making the main protein of your diet.

Some tunas, such as light canned tuna, are specifically made to be low-mercury. These are healthier and are a good option if you like to eat tuna on a regular basis.

Should you feed your Maine Coon Tuna?

It is fine to feed your Maine Coon tuna as a treat on some days. It’s health benefits can be nice for your cat, and the mercury won’t really have any effect unless they are eating it regularly.

That being said, make sure not to give your Maine Coon tuna too often. It should definitely not be the main or one of the main sources of protein or nutrition for your cat.

Not only is this because of the threat of mercury but also because it will not give your Maine Coon all the necessary nutrients it needs, and your cat can actually get addicted to canned tuna! Be careful!

Similar to adult cats, it is okay to give a Maine Coon kitten some tuna. Obviously, the same rules apply! Make sure to avoid giving it to them too often to avoid them wanting it too much, being adversely affected by the mercury in it, and do not give it to them as the main protein source in any meals.

In fact, since kittens are so small, it is best to give them no more than a tablespoon of cooked tuna daily, if they like it. Even if they beg to have more, it is for the best to keep the amounts very small, as this is what is healthiest for your Maine Coon kitten!

Why are some Maine Coons addicted to Tuna?

Be careful, your cat can easily become addicted to tuna! This can happen if they are eating tuna that’s been packaged for humans, or tuna that is specifically made for cats.

The reason that your Maine Coon cat can become addicted to tuna is its very strong taste and smell. This will cause them to seek it out if they smell it and want to eat it very regularly, which, as we’ve already covered, can be very unhealthy for them in excess!

Is there better fish than tuna for a Maine Coon?

Tuna is probably the best fish to feed your Maine Coon cat. This is because all the healthy, important parts of the fish you want your cat to eat are contained in the fish oil.

This is where all the omega-3 fatty acids and other heart-healthy vitamins and nutrients are contained.

Other non-oily fish are less risky, as they don’t contain mercury in the same levels as tuna has. However, they also don’t have the same health benefits as tuna would give your Maine Coon, and the cat will not like it as much anyway.

Is Tuna-based wet food ok for a Maine Coon?

Tuna based wet food is ok for Maine Coon cats and can be given on a more regular basis than pure tuna out of the can. However, it still contains the traces of mercury that are in tuna, so it shouldn’t be the only flavor of wet food that you are feeding your Maine Coon cat.

Remember, giving your Maine Coon tuna in moderation is totally okay and can make for a happy, healthy cat. A tablespoon or so a day as a treat is a perfect amount to give your Maine Coon.