Can Cats Spray Without Smell?

Can Cats Spray Without Smell?

Some cats can spray without a very strong odor. It’s not likely that their spray won’t smell at all since their spray contains urine. However, when a cat has been fixed, its spray doesn’t often smell as strongly as it once did. 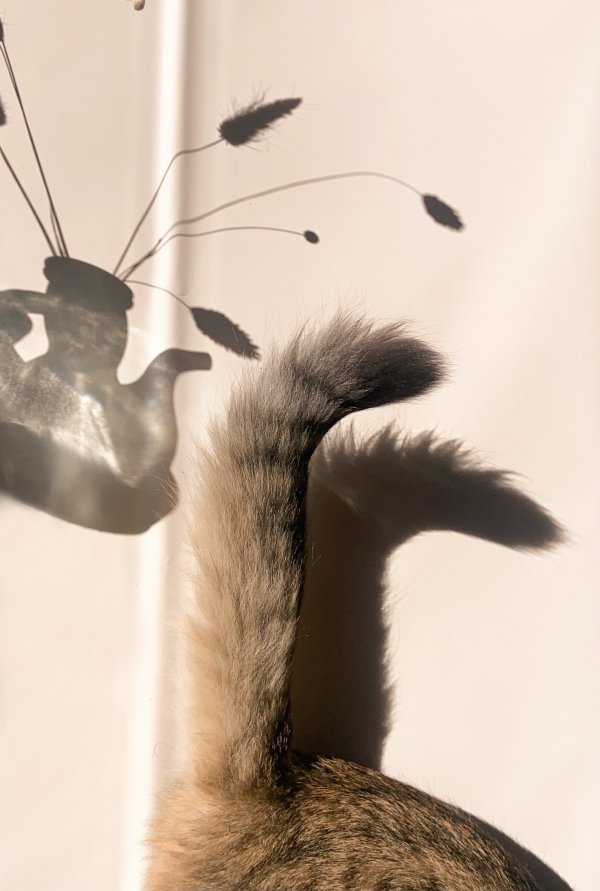 A cat standing next to a wall with its shadow cast on the wall.

Neutered cats do still have the ability to spray. Often, their spray will not have as pungent of an odor as a non-neutered cat would. However, paying attention to what occurs when your neutered cat sprays is important, as there is usually a reason why they would spray even though they’re neutered.

For instance, if your neutered cat sprays and a light-colored liquid is detected, this could be an indication that there’s a health issue occurring, especially if there is almost no detectable odor at all. When an indoor cat sprays, it can be a sign that something is wrong or they are feeling overwhelmed by something in their environment.

Why Do Cats Spray?

Cats that are older or who are neutered may end up spraying for various reasons. They could be spraying as a defense mechanism when something in their environment is upsetting them or causing them stress. Older and neutered cats might also spray as a way to tell you something is wrong, like an underlying health concern.

Cats also spray to tell other cats or animals that their space is theirs and no one should enter. If new animals have been introduced to the home, or cats are lingering around outside, your cat might spray to try and scare them off. If you can’t find any kind of trigger that may be causing your cat to spray, a call to your vet is warranted.

If a cat is experiencing a urinary health issue, it might try to spray in an attempt to relieve its discomfort. If you’re able to eliminate a health-related cause for spraying, you can then try to investigate further to figure out what is going on in the home that’s causing your kitty to act out.

What Causes The Smell In Cat Spray?

Your cat’s spray is meant to have a smell because they are using that spray to communicate with other cats. Some pheromones are like a calling card for your cat, letting other cats know that what they are smelling is another cat’s territory.

Even if there aren’t other cats near your cat’s space, your cat might still spray as a fear or stress response to keep the “threat” away. Cats don’t realize that nobody other than cats can interpret what the smell of these pheromones is meant to symbolize.

What Is The Difference Between Cat Pee And Spraying?

When cats spray, there is urine coming out in this process. They often stand in an alert position with their tail straight up when spraying. One of the easiest ways to tell if you’ve stumbled upon spray and not pee is if your cat is still using their litter box.

If you believe that spraying is due to litter box issues, or are having a hard time determining whether your cat is spraying or peeing, do a thorough clean of their litter box. Be sure to remove anything in their environment or near their litter box that appears to be causing them distress.

How Can I Prevent My Cat From Spraying? 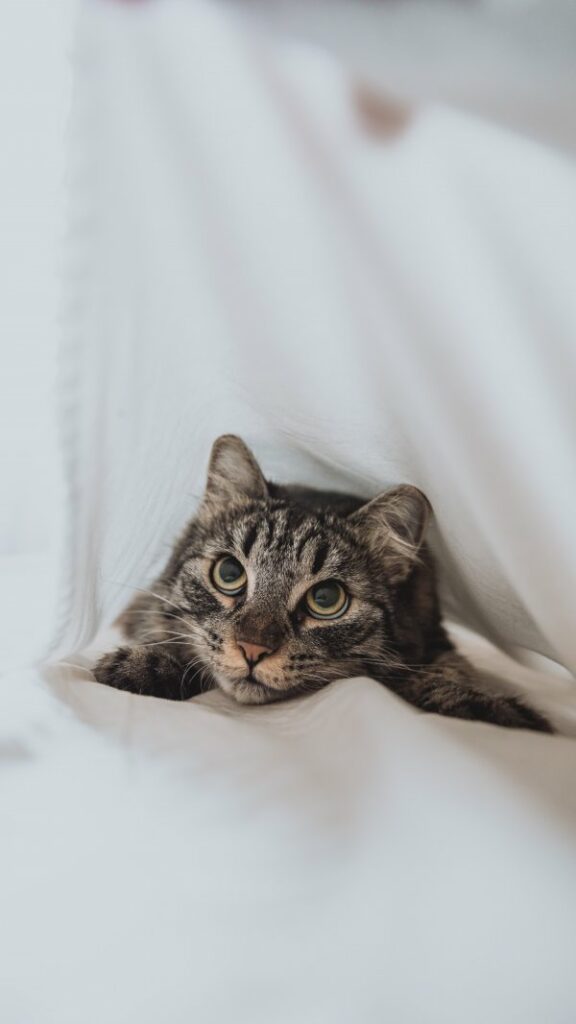 A brown and black cat lying on a white textile staring.

If your cat is spraying and there are multiple cats in the home, you can prevent this behavior through proper socialization. Additionally, having separate spaces for each cat to go to when stressed can help prevent territorial and aggressive tendencies. When cats are socialized well, their propensity to be territorial will often subside.

Trying to keep your cat’s environment as predictable and secure as possible can help prevent spraying, especially if your cat sprays because of stress. Regular vet visits for health checks and getting your cat fixed can also help tremendously. Cats will spray most often when they want to mate, so fixing takes care of that habit.

Can Cats Spray Without Peeing?

Cats can’t spray without peeing because their spray is urine. They are just releasing other chemicals when they’re spraying, which is what causes it to smell a little bit different than straight urine. Sometimes, cats will attempt to spray but little to no spray will come out of them.

Why Does My Cat Spray But Nothing Comes Out?

While the desire to spray is an instinct in cats, the behavior itself is not. Cats are taught to spray by their moms or from other cats, so if they’ve never had the opportunity to have been taught, they won’t be able to spray anything out.

Your cat might be trying to either mark their space or alert you to something that’s bothering them, so they’ll act out as if they are spraying. If you happen to catch them in the typical spraying position, it’s worth trying to investigate what’s causing your kitty to want to mark your home.

How Do I Know If My Cat Sprayed?

The best way to tell if your cat has sprayed is obviously to catch them in the act. When cats spray, they will stand up straight, and their tail will usually be shaking in the air. You can also tell if your cat is sprayed based on where you find the wet spot.

They often spray horizontally, so the spray might be on the wall or off the ground.

Cat spray tends to have a stronger smell than pee does, but this will often depend on whether or not your cat has been fixed. When cats aren’t spayed or neutered, they will spray out chemicals in addition to urine, causing the spray to smell much stronger and much more unpleasant than cat urine alone.

When a cat is fixed, they often don’t release these chemicals as they are not looking to mate, and they are often – though not always – as territorial as they once were.