Can Cats Eat Irish Sea Moss? (Read This Before You Feed It!)

If you have Irish Sea Moss in your home, or just curious you may be wondering if its OK to give it to your cat…

Cats can eat Irish Sea Moss but it should only be considered occasionally. There are even specific seaweed-based supplements available for cats. But, primarily cats are carnivores and need mainly proteins.

So, now you know they can. But, should they really be eating it? What about kittens? Wht is the nutritional content of thsi Irish Sea Moss? Keep reading for these answers, and so much more…

What is Irish Sea Moss?

Irish Sea Moss (Chondrus crispus), as it is commonly known, is a specific species of red algae. And, it is known to grow in Europe and North America. It is also known as simply “Sea Moss”, or “Carrageen Moss”, which is used in Ireland meaning “little rock”.

The chances are you may have heard of it in its simplest form as Sea Moss, but ultimately they are used quite interchangeably. 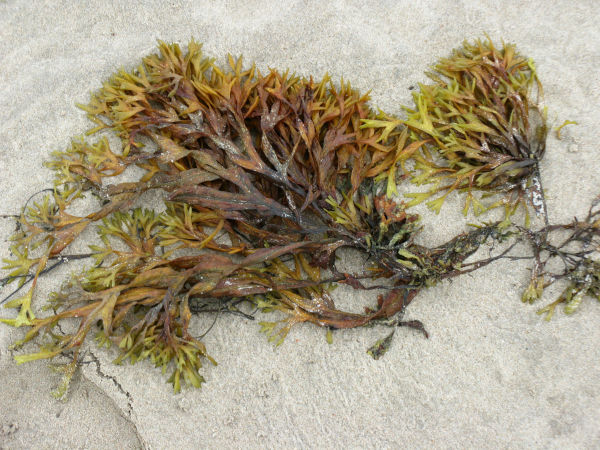 Seaweed on a beach floor.

Irish Sea Moss is really a type of algae or seaweed. Which is quite confusing based on its name. Its primarily used in food for its popular carrageenan ingredient which is known for being used in vegan based foods (can you be on this diet and be a cat owner? click here) as a gelatin replacement.

If you have ever wondered why it is quite a popular product you know one of the reasons, its carrageenan content. But, later on, I will reveal another reason why it got catapulted into the mainstream spotlight.

What is the nutritional content of Irish Sea Moss?

Source: PacificHarvest (Based on 100g) *

Irish Sea Moss contains a large amount of calcium, sulphur, Iodine, and also vitamins such as A & D. It does contain some protein in fact, but this does not mean it should be considered long term for cats.

But, as discussed earlier, cats can still consume it but it should never be regarded as a staple part of their diet.

What triggered the interest in Irish Sea Moss?

One of the biggest boosts in popularity for Irish Sea Moss came from a post from the celebrity Kim Kardashian. Thsi triggered many blogs and outlets to post content about the potential health benefits.

Some say that these health benefits are more hype than based on science. And, some even argue that the boost in the trend has been abused by some health food products to boost their sales. In the next section I will explain some of these reported health beenfits.

Are there any health benefits of Irish Sea Moss?

As discussed earlier there have been many claims of the potential health benefits of this superfood. But, let me share some with you now…

One of the benefits of this Sea moss is its super low calory content. This also complemented by its filling fiber texture mening that it can appear filling without adding calories to your diet.

For humans this may be a benefit. But, for cats its not ideal. Cats need a nutritional balanced diets rather than a weight loss focus.

This Irish Sea Moss has a good inc content. One of the benefits is it helps growth and maintenance of your body. This includes the clotting of your blood, helping to heal wounds, etc.

For cats Zinc can be beneficial and helps them maintain a healthy body. But, it can also be dangerous if consumed in large quantities. So, its not good to go overboard with zinc for cats.

One of the benefits of this moss is that it helps with dry skin conditions. It is believed to help with eczema as well as psoriasis. This is one of the reasons why you may see it in the ingredients of some creams or moisturizers.

For cats, I have no knowledge of the same benefit for their fur or skin. For humans, yes, there appears to be some benefit, in this context.

There are some theories that this Sea Moss can help with Parkinson’s disease, although I can’t sent see any conclusive evidence. The theory comes from a study done using worms extracted from Sea Moss.

The findings were that it could reduce stiffness and movement issues. But, again, not conclusive or a real remedy for this disease.

According to this site, Irish Sea Moss may be able to help your immune system and help fight against salmonella. The latter was concluded from a study that found that it helped stop the growth of a bacteria that causes salmonella.

These potential benefits have been observed for humans. But, regarding cats, no known studies to confirm if they have the same effect.

Another discovery is the substance in Irish Sea Moss that gives it that prominent red color may help to control blood sugar levels. It allegedly allows your body to respond to insulin easier.

Are there any health risks of Irish Sea Moss?

Where there are benefits there are always some potential negatives. So, for that reason let me explain some of these:

01. Too much could affect your thyroid hormone balance

As mentioned earlier, there is a high level of Iodine in Irish Seam Moss. This is good, because it can help produce thyroid hormones. The issue is controlling the quantity. Too much can cause an unwanted imbalance.

02. Lack of required Nutrients for a cat

Although this Sea Moss has a long list of potential health benefits it does not have the mix of nutrients to sustain a healthy, balanced diet for them.

So, in moderation, or as a treat, maybe. And, that’s assuming your cat will even be interested in it. But, as a long-term food replacement, no way!

Should you feed your cat Irish Sea Moss?

You can feed your cat Irish Sea Moss on rare occasions. But, I would not advise its use for any cat on a long-term basis. And, there are so many other nutritional meals for a cat there is no real reason to consider it.

Obviously, there are some people that may have some random reason fro this but it is not something I would recomend.

I would not recommend feeding kittens Irish Sea Moss. This is because it does not contain the required nutrients that a kitten needs, especially for young kittens that should be consuming their mothers milk or gruel.

Another point is this, kittens are growing and need an even more balanced and focused diet (Can’t they have some treats, like pie? Click here). This is to make sure they grow to their full potential and become healthy adult cats.

Are there better food alternatives than Irish Sea Moss for cats?

There are many more alternatives to Irish Sea Moss for cats such as protein-rich meat-based foods, such as wet cat food (What if there is Xanthan Gum in it? click here), cooked chicken, beef, etc. This is because cats are known to be obligate carnivores, meaning they need meat.

Do Cats Know When To Stop Eating?

Can I Mix Different Brands Of Dry Cat Food?