Can Cats Eat Doritos? (Or Could It Get Stuck?)

Cats can eat Doritos in small portions, but that doesn’t mean it’s a good idea to feed it to them often. Doritoes have a high salt content and offer no nutritional benefit to your cat.

So, now you know. But, what do these Doritos consist of? Can kittens eat them? What about licking them? Keep reading for these answers, and much more… 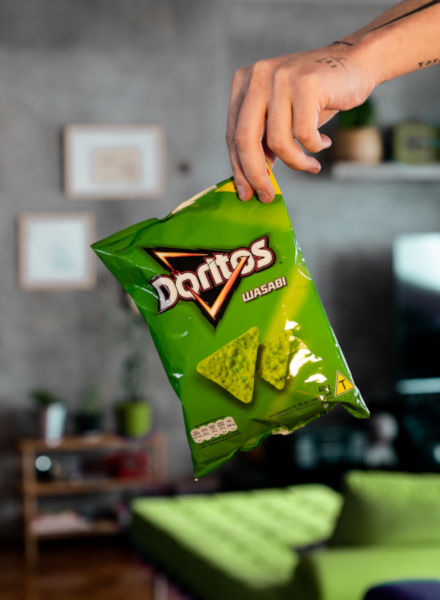 A packet of Doritos.

Doritos have been on the market since 1964 and they’re one of the most popular American brand chips. They are a tortilla chip that is owned by Frito-Lay.

When they were first released they didn’t come in any flavors but after a few years on the market, they started experimenting with different flavors and became a household name. Some of their popular flavors include Nacho Cheese and Cool Ranch.

What can Doritos do to your Cat?

If your cat eats Doritos too often then they could get a stomach ache from some of the ingredients.

Cats seems to love the cheesy treat just as much as their owners do. However, you may be worried about letting them eat that chip covered in bright orange powder.

If your cat insists on begging for some of those delicious chips when you open the bag, try to limit their serving to only 2 or 3 chips.

Make sure this is only done once in a while as well. Too much indulgence could lead to health problems or other unwanted issues.

Many cat owners notice their furry friends often start begging whenever they eat chips or popcorn.

The flavored powder and the salt on the Doritos are a tasty treat to many cats, they actually have very little interest in the crunchy chip part. If you notice your cat licking an empty bag, that is why.

Every flavor of Dorito is slightly different in nutritional content. Since Nacho Cheese is one of their most popular flavors (and a favorite of many cats).

As you can see these Doritos have a high fat and carbs content. They may be delicious, in my opinion, but for cats? Not ideal.

Are there any health benefits of Doritos? 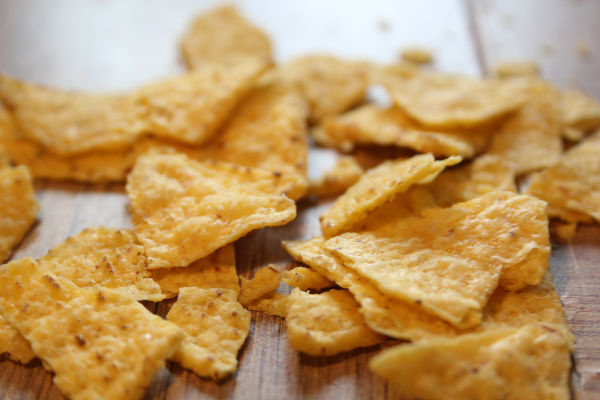 These chips may be tasty, but they have no real health benefits. Don’t let the fact that they are corn chips fool you into thinking they are a healthier choice of chip.

They are incredibly high in fat and have a lot of carbs too compared to other types of chips.

Are there any health risks of Doritos?

There are a few alleged health risks linked to overindulging in Doritos….

According to this site, they may contain genetically modified corn. The fear is, it could bother people with food allergies. Some people worry it could also cause stomach aches or digestion issues.

Since these chips have a high salt and sugar content, there are negative effects that could be caused to the body from eating a high quantity.

With the high fat and carb content, like most chips, too many of these chips could lead to weight gain or obesity.

Doritos are regarded as a treat, so they should only be consumed occasionally to avoid these problems.

Should you feed your cat Doritos?

You should not feed your cat Doritos. However, it is okay to give your cat a treat once in a while, and a little bit of Doritios aren’t harmful. However, you should break the chip into bite sized pieces so your cat doesn’t risk choking.

Sometimes it can be hard to say no when a cat is begging. Their eyes seem bigger, their ears seem pointier, and they do that cute little nudging thing with their cheek.

It’s understandable if you want to give in when your cat is begging. They deserve a delicious treat too. If you stick to feeding your cat no more than a couple of chips and only do this once in a while, they will likely be fine.

Are Doritos OK for Kittens?

It is not recommended to feed any sort of chips to kittens, this includes Doritos. The salt content in chips is too high for a kitten’s body and should be avoided for them at all costs.

Always try to stick to a vet-recommended diet for kittens, as it’s important for healthy growth.

Cats can lick Doritos but only in small quantities. Just like you, they appreciate the salty flavor that these chips are coated in.

Most cats won’t even bother trying to eat the chip because it’s just the powder coating that they are interested in. It’s not just Doritos they love either, they also seem to love licking popcorn, pretzels, and potato chips.

Now, just because a cat can lick a Dorito without getting sick doesn’t mean they should be allowed to often.

If they lick too many Doritos in one sitting or are allowed to lick the chips every day, they could experience health issues associated with consuming too much salt. Only allow them to do this once in a while.

Are there better food alternatives than Doritos for cats?

If you like to share your human snacks with your cat, then try to stick to treats that are more suitable for their digestive system. Cats shouldn’t be eating foods with high salt or sugar content. Actually, they’re carnivores so the best snack that you can share with them would be meat.

Any meat that is given to cats needs to be cooked, avoid giving them raw meat even if they beg. Lean deli meats are a favorite snack for many cats, and easy to share too!

Some other human treats that cats can eat safely in small quantities are:

Doritos are unlikely to kill a cat. And, I have no known reports of this. However, as tasty as they may be, they are loaded with salts, and other unhealthy ingredients that won’t agree with most cats.

Of course, they aren’t healthy for cats to be eating. Excessive amounts of those things have the potential to cause long-term health problems for cats. As discussed earlier, if your cat is persistentantly begging for some Doritos, only allow it in small quantities.

If you notice that your cat got into the Doritos when they were left unattended or only has a few nibbles now and again, then there is likely nothing to worry about.

Everyone likes to sneak a treat once in a while, even house cats.