Cats can eat Alfalfa sprouts. Alfalfa sprouts provide some fiber for cats as well as some vitamins and minerals. But, they are over 90% water. So, they are never a replacement for their staple diet. Even though cats are carnivores and survive mostly on meat, these sprouts, in moderation, may improve their digestion.

So, now you know. But, are there any health benefits with these? Are there any known risks? And, what about kittens, can they have them? Keep reading for these answers, and much more…

What are alfalfa sprouts? 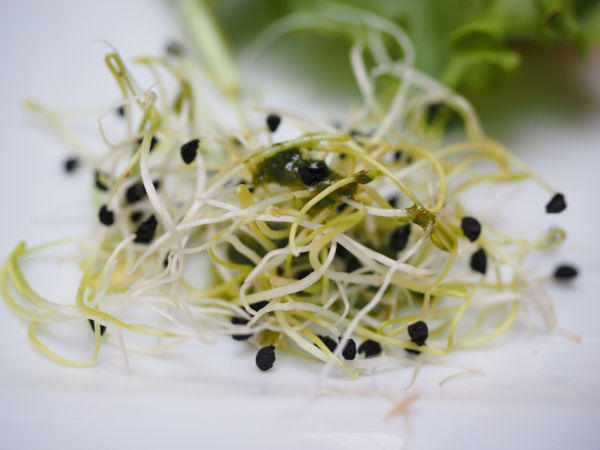 Alfalfa sprouts are the tender young shoots of the alfalfa plant. The mature plant is generally not eaten by humans but is used as food for livestock. The sprouts have a fresh and nutty flavor and many people, along with cats, enjoy eating them.

Are there any health benefits of Alfalfa sprouts?

Alfalfa sprouts contain many vitamins and minerals and may provide you with some great health benefits.

Some studies show that consuming Alfalfa sprouts helped people to lower their LDL cholesterol, or “bad cholesterol” by 18%.

Eating alfalfa sprouts as part of a healthy diet may give you an advantage when trying to lower your cholesterol.

Alfalfa sprouts may help to improve your metabolic health by helping to control blood sugar levels, especially in people with diabetes.

Alfalfa may help to increase the amount of insulin released by the pancreas, which then in turn helps to lower blood sugar levels.

So far, these results have only been found in mice, but the same thing may apply to humans.

Alfalfa sprouts are high in phytoestrogen, which is similar to the estrogen produced in the body. When women enter menopause, their bodies produce less estrogen which is tied to hot flashes, loss of menstruation, mood changes, and sleep issues.

There is some evidence that eating Alfalfa sprouts helps to replace some of that lost estrogen and may aid in the frequency of hot flashes and night sweats.

Alfalfa sprouts are high in antioxidants, which may prove to be helpful to your overall health. Antioxidants, found in many fruits (what about blueberries? click here) and vegetables, help to fight free radicals in your body. Free radicals are compounds that are related to a variety of illnesses such as diabetes, cancer, and degenerative eye disease.

Eating foods high in antioxidants can help to keep your body healthy and may put you at less risk for some diseases.

Alfalfa sprouts alone will not give you all the vitamins and minerals that you need but they can definitely be incorporated into a healthy diet.

Are there any health risks of Alfalfa sprouts?

Alfalfa sprouts are considered to be generally safe for most people but should be avoided by some individuals. such as…

Alfalfa sprouts should be avoided during pregnancy because they may cause contractions.

Alfalfa sprouts are high in vitamin K which, when eaten in large quantities, can cause blood-thinning medications to be less effective.

03. If you have an autoimmune disorder

There have been some cases that link the use of Alfalfa sprouts with the re-activation of lupus symptoms in some people.

If you want to incorporate Alfalfa sprouts into your diet but have an autoimmune disorder, make sure to discuss it with your doctor first.

04. If you have a compromised immune system

Alfalfa sprouts, and sprouts in general, grow in moist conditions that are ideal for bacterial growth. Not all Alfalfa sprouts will contain bad bacteria, but many sprouts you buy at the store may contain bacteria because they may have been sitting on the shelf for a few days before you get to them.

Should you feed your cat alfalfa sprouts? 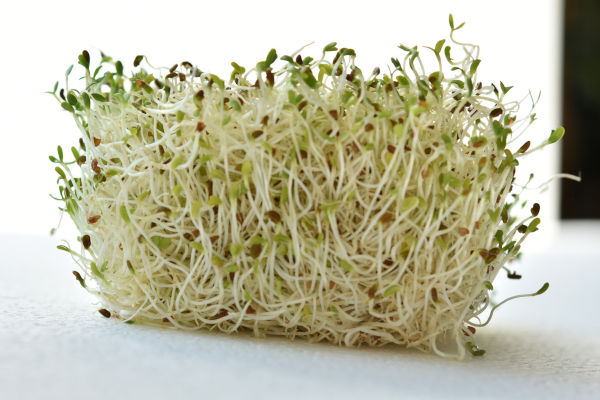 You should only feed your cat Alfalfa sprouts in moderation. You should never replace your cats’ regular meals with these sprouts. If you grow Alfalfa sprouts at home, you can offer a few sprouts to your cat here and there, if your vet agrees, but that’s it.

Are Alfalfa sprouts okay for kittens?

You should never feed Alfalfa sprouts to kittens. Up until kittens are about 8 weeks old, they need their mother’s milk. After that, they will start weaning onto cat food, however, their immune systems are still developing, and you should not feed them any sprouts.

You can reevaluate the matter, maybe, and if your vet agrees when your cat is fully grown.

Are there better food alternatives than Alfalfa Sprouts for cats?

Along with Alfalfa sprouts, there is other plant food that owners have been known to feed their cats, such as:

But, these are never a replacement for their main cat food. If you want to include variety in your cats’ diet, you can also give them the following foods along with their regular cat food:

Can Alfalfa Sprouts cause cats to have diarrhea?

In general, it does not seem that Alfalfa sprouts will cause cats to have diarrhea. Eating a few Alfalfa sprouts may help to alleviate constipation symptoms in cats. Of course, if you notice that your cat has diarrhea after eating Alfalfa sprouts, do not continue to offer it to them.

Alfalfa sprouts definitely go bad. To properly store your Alfalfa sprouts, place them in between two pieces of paper towel and seal them inside a plastic bag and store them in the fridge.

What vegetables are not good for cats?