If you have a cat the chances are you want to know the best food for it and may have wondered if drinking milk is beneficial.

Cats can drink milk. For kittens they mainly drink milk from their mother, but they can tolerate  cow’s milk. As cats age they lose their tolerance to lactose, hence the reason you may have heard that many cats are lactose intolerant.

So, now you know. But, is milk bad for older cats? Do cats actually like milk, if it’s available? What alternatives are there to it? Keep reading for these answers, and so much more.

Contents show
1 Can Cats drink milk?
2 Is Milk good or bad for cats?
3 Do cats really like milk?
4 What alternatives are there to milk?
5 Can I feed my cat purchased cat milk only?
6 Can I pour milk on my cat’s food?
7 What happens when a cat drinks milk?
8 Do kittens get enough nutrition from cows milk?
9 Is coconut milk OK for cats?
10 What can cats drink besides water?

Is Milk good or bad for cats? 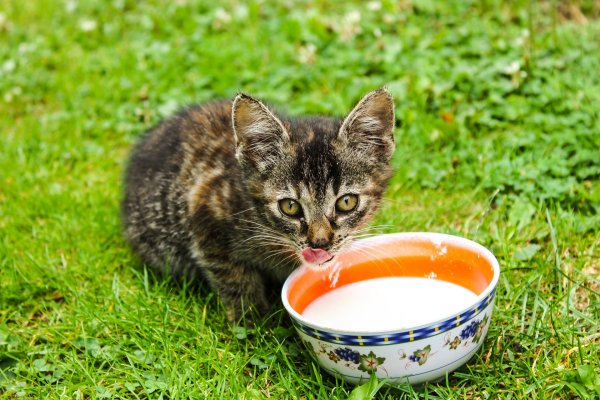 A kitten drinking milk from a bowl.

Milk is bad for most adult cats, in the long term. This is because many of them have lost the enzyme responsible for digesting the milk as they age. So, the majority of them find it hard to digest the milk.

This may be nature’s way of weaning them onto solid food naturally. But, whatever it is, it works. The confusing thing is, if you placed a bowl of milk in front of an adult cat today, chances are it will attempt to drink it.

That does not mean it’s good for them though. It’s like this, chances are if I placed a tasty pizza in front of you, you are likely to eat it, but does that make it good for you?

Cats do seem to like milk. And this is why it seems like a good choice. Many cats would drink the milk if it’s there, but most will struggle to process it.

However, if you want to let your cat get its milk-fix, without the digestion issues, then you can consider lactose-free milk for them.

This type of milk is likely to cost more, same as other milk variations, such as oat milk. But, it can help your cat to avoid the stomach issues after drinking the milk that you may have seen with normal cows milk.

What alternatives are there to milk?

Alternatives to milk include offering your cat some treats, such as some meat-based ones. Your cat is likely to love these and it may help them to forget about the taste of milk.

Failing that, just spend some quality time with your cat. Believe it or not, this may be all that is needed to get rid of its urge to drink milk all the time. And, it can save stomach cramps from trying to drink cow’s milk.

Can I feed my cat purchased cat milk only? 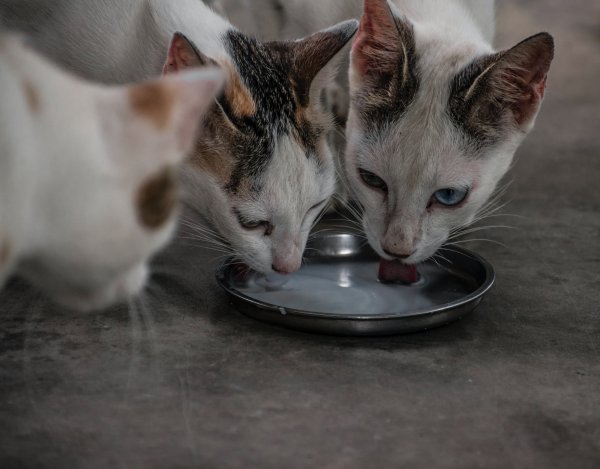 Cats drinking milk from a saucer.

No. Cat milk that you buy in the store is better than standard cows milk. And this is because it is often reduced lactose, or even lactose-free. But, it is not regarded as a meal replacement.

Also, it’s worth noting that this milk often has a high fat content, similar to cow’s milk. And, therefore, it can pile on the calories for your cat.

So, as a daily offering it can lead to them becoming overweight and not getting the extra nutrients they need from other cat foods, such as wet food.

Can I pour milk on my cat’s food?

No. It is not a good idea to pour milk on your cat’s food for two reasons: It can cause them to neglect the solid food, which is packed with nutrition. And, lastly, it can cause Gastrointestinal (GI) health issues.

These GI health issues can be a collection of issues such as Irritable Bowel Syndrome (IBS), nausea, diarrhoea, etc. Either way, neither of them are good and need to be avoided.

What happens when a cat drinks milk?

When a cat drinks milk (adult cat), it will seem to consume it fine. However, inside the cat’s stomach the lactose is not passed through to its bloodstream. Instead it stays lodged in their stomach.

With time this may cause a number of symptoms such as stomach aches, diarrhoea, IBS, losing its appetite, etc. This is due to the fact that adult cats won’t produce the enzyme needed to break down this lactose like young kittens can.

Do kittens get enough nutrition from cows milk?

No. Cows milk does not contain the required nutrients for a kitten. The only milk that can provide this is their mothers natural milk. Specially formulated milk for kittens is better than cow’s milk. But, it could not be considered as a better option than its mothers milk.

So, never feel tempted to substitute your cat’s milk for cow’s milk for convenience. If the kitten has been separated from its mother early, for some reason, then cows milk is still not the best choice.

Is coconut milk OK for cats?

Cats can drink coconut milk. But, it should be regarded as a rare treat, if at all. This is because it contains a high level of fat and oil that will not benefit your cats dietary needs.

Coconut milk may seem delicious to you, or may sound like a healthy natural choice. But, for cats it’s not the ideal choice.

What can cats drink besides water?

Cats can drink specially formulated cat milk, bone broth, or even apple juice. But, just because it’s possible it can’t be regarded as a replacement for water. In fact, they should only be considered as a rare treat, or if they have problems with hydration.

Sometimes cats refuse to drink water from their bowl, or in very small quantities. This is why wet cat food is so popular, because it offers them hydration as well as solid food.

Another technique to encourage your cat to drink more water is to offer it a water fountain. Cats prefer running water. It appeals to their natural instinct. Believed to be from drinking from river streams, which was deemed as safe drinking water.