Can Calico Cats Have Blue Eyes? (Or Just A Fantasy?)

If you are interested in getting a calico cat, or just curious about them, you may have wondered if they can have blue eyes…

Can calico cats have blue eyes?

A calico cat can have blue eyes. This is because a cat’s eye color is determined by genetics. Also, restricted by what breed they are. Some breeds of cats will only have one eye color. And, because a calico is not a breed, but a type of fur color, it depends on what breed the calico is.

So, now you know that they can. But, what calico breeds have blue eyes? Will their eye color change? Are they more expensive than any other eye colors? keep reading for these answers, and much more…

What calico breeds of cats have blue eyes? 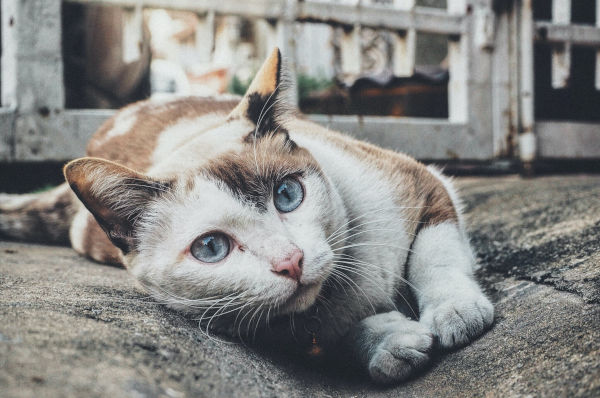 There is one breed of cat that has blue eyes in their genetic pool and can have nearly any color of fur. That is the Ojos Azules. A calico cat with blue eyes is rare because most breeds of cats who carry the blue eye gene can’t be calico because they originate from Siamese breeds.

Blue-eyed calico cats are rare, but not unheard of. There are only 6 breeds of cats that carry the blue eye gene, and not all of them can be calico.

Pointed breeds that are known for their blue eyes, like Siamese and Himalayan, have specific coat colors and can’t be calico.

A purebred Ojos Azules is rare to find, but they can still pass on the blue eye gene to their kittens even if the other parent is a different breed. So if you do come across a calico with blue eyes then it’s likely they have Ojos Azules in their genes.

What eye color can a calico cat have?

A cat’s eye color is determined by its breed, not its fur color. There are so many different eye colors that a calico cat could have:

One thing to know about calico cats is it’s easier to make a list of the cats that can’t be calico than the ones that can. This means that there aren’t specific eye colors for calicos.

Actually, a calico cat can have pretty much any eye color. Just like their fur, you never know what color to expect!

A blue-eyed calico cat lying down.

If the calico cat keeps its blue eyes after 7 weeks then the breeder may raise their price because of how rare they are. If this happens they could want anywhere between $700 to $1,500 for this blue-eyed cat.

However, this one depends on where you get the cat from. One thing to keep in mind about a kitten’s eye color is that it can change once the kitten is 6 to 7 weeks old. It’s very common for a newborn kitten to have blue eyes only for them to change color a few weeks later.

Quite often a calico with blue eyes was a mixed breed, and they often are sold for less money than pure breeds.

Is it rare for a calico cat to have blue eyes?

It is rare for a calico to have blue eyes. Most cats end up changing eye color once they reach that age, so it’s very rare to come by an adult calico cat that still has blue eyes. Also, only certain calico breeds can even have blue eyes, to begin with.

Most kittens, calico or not, are born with blue eyes. However, this is likely to change once they reach 6 weeks. Their eyes are usually only blue until they develop eye pigmentation, which is when they change shades.

Out of all the animals on the planet, cats have the most beautiful eyes. Even beauty gurus try to replicate a cat’s eye when applying their makeup. So, when a cat has blue eyes they’re undeniably beautiful.

Are all cats with blue eyes deaf?

A cat’s hearing and eye color are not connected. So, not all cats with blue eyes are deaf. However, this theory stems from the fact that some pure white cats have a mutation in their gene called KIT, which is the cause of their lack of coloring.

This only happens to approximately 40 percent of cats who are affected by KIT, so in reality, very few blue-eyed cats are deaf.

In some cases when these cats have blue eyes, it’s the result of a cellular issue. They have fewer cells to make pigments, so the blue eye color could leave fewer cells for inner ear functioning.

There are a lot of misconceptions floating around when it comes to cats. One of the strangest ones that many people believe is that cats with blue eyes are deaf. So, hopefully, this is now cleared up.

A calico cat that is born with blue eyes won’t always keep that color. It’s very common for kittens to have blue eyes until their eye pigmentation develops. If the calico cat has more white fur and still has blue eyes after 7 weeks, then it’s likely that their eyes will stay that color.

Even though eye color is determined by genes, it can still be linked to fur color. A white cat has less pigmentation so it’s more likely that they will have blue eyes as an adult than a cat with darker fur.

When do calico kittens usually change their blue eye color?

After 7 weeks that beautiful baby blue eye color is likely to change to a darker shade. This doesn’t mean a litter of baby calicos won’t keep their blue eyes, it’s just a very rare occurrence.

Are all calico cats born with blue eyes?

All calico cats are born with blue eyes. Baby blue eyes are a sign that the eye pigmentation hasn’t developed yet. As the kitten matures, they are likely to develop pigmentation so their eye (click here if one eye is closed) color may change.

It’s more common to see mature cats with green or yellow eyes, but cats with more white fur could keep the blue eyes.

Why are male blue-eyed calico cats so rare?

Blue-eyed calico cats are rare in general, but it seems that males are even rarer. This is because calicos are 99.9% female due to a unique chromosome makeup. So a male calico cat itself is rare, but finding one with blue eyes is almost as rare as finding a leprechaun.

A male cat can carry either an orange or a black gene, and their fur will be a variation on that shade. A female cat actually carries 2 different X chromosomes, meaning they could carry both the black and orange gene. Female cats are more likely to be in a variety of colors, which is why calico cats (what about ticks & fleas? click here) are mainly female.

However, in very rare cases a male cat could carry two X chromosomes and a Y chromosome. This is a genetic oddity called XXY Syndrome and it’s the only way to get a male calico cat. On average, only 1 in 3000 calico cats are male. Due to their genetic abnormality, they often don’t live as long as female cats do.