Can A Mother Cat Suffocate Her Kittens? (Or Myth?)

If you have young kittens and have concerns about their mother, you may be wondering if there is a chance that they could get hurt by her…

Can a mother cat suffocate her kittens?

While it is unlikely that this will occur, it is possible that a mother cat can suffocate her kittens. The problem is generally one of space. If the mom is suckling the kittens in a tiny space, in her exhaustion is possible that a kitten may move into a position where it might become smothered.

Keep in mind that this is highly unlikely – but there is indeed a slim possibility. As such, you’ll want to reduce the chances by creating a nest for your cat and her kittens.

An easy way is to cut a cardboard box so that the walls are high enough that the kittens won’t wander out, and line this with plastic first, followed by newspaper. This will give her more space and should be easier to clean.

Could a cat suffocate you while you sleep? 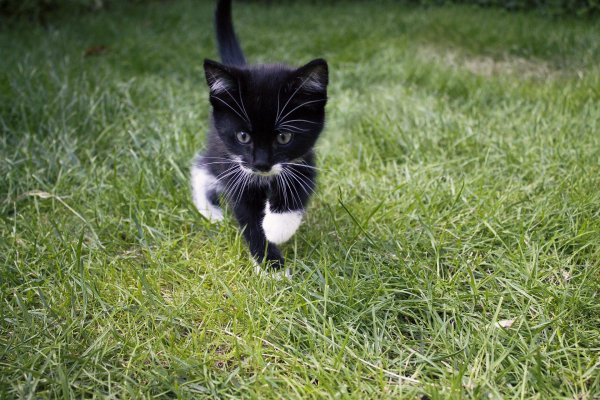 A white and black kitten walking on grass outdoors.

Your cat is not likely to suffocate you, but you could certainly wake up with a bit of fur in your nose if your kitty sleeps too close to your face.

Cats are not very heavy and even if one was trying to suffocate you on purpose, the logistics of covering up both of your nostrils and your mouth, as well, would be a bit much for even the angry feline when you consider how much the average human moves around in their sleep.

Would a cat try to suffocate her kitten on purpose?

No, this is not a thought that would ever cross a cat’s mind. Cats are apex predators and armed well with claws and fangs, so why would they resort to suffocation? If a kitten is suffocated by its mom, it is going to be an accident, caused by exhaustion and an unlucky kitten ended up underneath its mom.

Even in a scenario where the kitten is unwanted, the mom will not resort to nefarious means to ‘get rid of it’, but rather just move it far away from the others. If this happens and mom has plenty of nest space, then you should check with your vet as you will likely need to nurse the abandoned kitten to health.

Can a mother cat hurt her kittens? 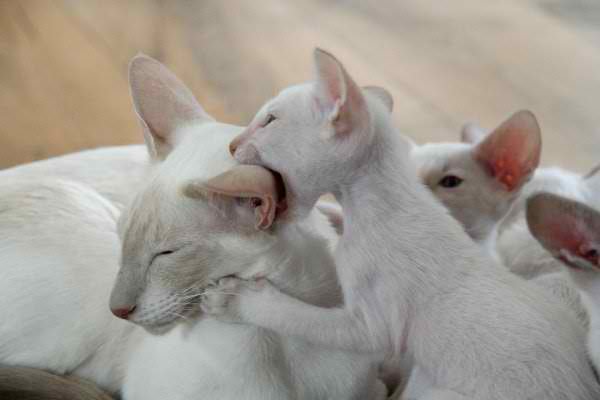 White kittens playing with their mother.

While it is possible, it is highly unlikely. Once the kittens are delivered, the mother will become aggressive during the first 3 to 4 weeks after birth. This is directed at the rest of the world, NOT at those kittens, and is a natural response – male cats have been known to eat their babies from time to time.

As such, mom may be hostile to others, but while she might be sharp with her kittens, she’s usually not going to try to harm them, with the possible exception of complete rejection of one or more sick kittens.

In such cases, however, the mom is usually just driving them away from the healthy kittens and you may need to step in to nurse the rejected ones after safely separating them from their mother.

Can newborn kittens suffocate under blankets?

Newborn kittens should not be sleeping under blankets. While blankets are permeable and completely safe for adults, newborns can get lost under there and inadvertently laid on in worse-case scenarios.

As such, t’s best to wait until they are older before you let them sleep under the covers unless you simply intend to play with them under that blanket yourself and their time under the blanket is fully and safely supervised.

Why do cats suffocate babies?

There is an old wives’ tale that says that a ‘cat will steal a baby’s breath’ and this refers to Baby’s Breath plant, the Gypsophila paniculata. The warning is a good one, as cats seem to love the scent of these little, white flowers, but they are toxic for the kitty to ingest!

This led to the mistaken belief that a cat will suffocate a baby. While cats might be tempted by the milky breath of the baby to sleep close, it is not out of a desire to suffocate your new family member. That said, it is still not recommended that you let the cat sleep with your baby for very practical reasons.

First, the infant is pretty helpless, and you don’t know if they are allergic to felines yet. Next, sudden movements of even crying out are going to attract or alarm the cat, who might inadvertently harm the baby while simply being curious or trying to play.

Despite the popular saying, that cats aren’t out to murder babies – but the gist of the message is still a good one. Cats should not be sleeping with infants, they’re simply too fragile at this early stage of life.

How do I know if my cat is rejecting her kittens?

Newborn kittens need to eat a lot. They will be nursing every 2 hours and while it is unfortunate, mothers can and sometimes do reject 1 or more of their kittens. This will manifest as the mother ignoring them, or even hissing at them and not letting them nurse.

In some cases, mom may even pick up one or two and move them away from the rest. If this happens, then contact your vet as you will likely need to obtain some kitten formula to help nurse the rejected kittens to give them their best chance at survival.

While mom will hiss and perhaps even bite at these kittens, it will rarely break the skin, but if you need to nurse them then it is best to keep mom and these rejected kittens separate. Otherwise, they will still try to seek out their mother and the stress will not be good for any of the felines involved.

Why is my cat being so rough with her kittens?

Some hissing and biting are to be expected and it doesn’t mean that the mom is trying to hurt her kittens. If you are worried, simply check the kitten’s skin if mom will let you. You should notice that the previous bites have not broken the skin and if you do, then you can relax a little.

Short, quick bites are a way that cats get each other’s attention, and it’s a way that mom can quickly tell her kittens ‘no!’ when they are moving around and apt to get themselves into trouble. It also helps to remind the kittens that mom is in charge, so while it’s a little scary you won’t need to worry.

As long as mom is not breaking the skin with her biting, then it’s perfectly normal behavior.

Can cats suffocate themselves?

Unless a cat manages to get themselves into a container that could be accidentally closed off, you won’t have to worry about them suffocating themselves. Even underneath the blanket, your cat is not at risk, as while the blanket looks solid, in most cases it is actually quite permeable and thus it’s easy for your cat to breathe.

There is a small risk, however, that your cat might get a little too warm under there, but adult cats are perfectly capable of squirming out from underneath those covers whenever they feel like it.

Should you put a blanket over a kitten?

You can partially cover a kitten with a blanket if they will allow it, but it’s not recommended that you let them tunnel under the covers until they get a little older.

While a cat can breathe under the blanket, a kitten can have a hard time finding their way out, and should you fall asleep then you could accidentally roll over them.

Kitten is simply too fragile to be spending time under there, though if you are trying to get them used to sleep under the covers, you can certainly let them – provided that you will be there, fully awake, to supervise them the entire time that they are under the covers.