If you have ever looked at your cat and wondered what its tail was telling you as it moves and swishes, keep reading…

How do cats communicate?

Cats communicate largely by scents, occasionally through vocalization, and quite a bit through their body language. For instance, a cat rubbing against you is communicating by scents and by body language. The rubbing is affection, but scent glands in their face and other body parts are marking you in the process!

One body language communication that you can easily notice and read if you know what to look for is the movement in your cat’s tail. Depending on how it is held and the movements involved, you can actually learn quite a lot about your cat’s mood and their likely intentions.

What does a straight cat tail up mean?

Orange cat being scratched on the back.

One tail signal that you probably see every day but haven’t really thought about is a tail pointed straight up at the sky! When you get home from work or when your kitty greets you in the morning, often they’ll come running with their tail stiff and straight while they do.

This is a sign that your cat is happy to see you, or perhaps happy to see you and expecting a yummy breakfast, but in either case, it’s a good sign. Your cat is content and feeling good, and their tail is a clear indication that this is the case.

What does it mean when your cat’s tail is in a question mark formation? 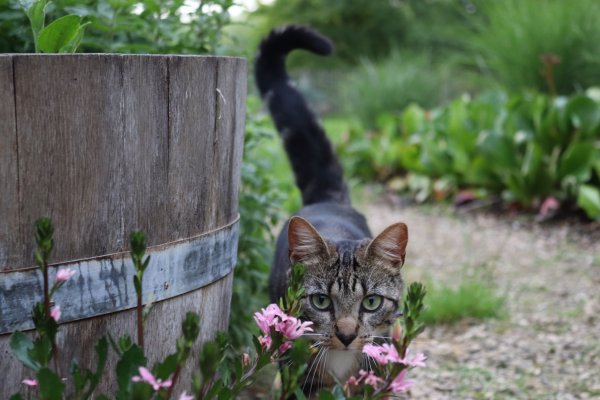 The question-mark ‘crook’ in a cat’s tail is actually kind of a fun signal, because that question mark shape also happens to be what this tail signal indicates.

Your cat is trying to find out if you feel like playing or simply spending a little time together and that little question-mark in their tail is your kitty’s way of asking ‘do you want to do ____?”.

As far as what the blank implies. Cats are creatures of habit, so in most cases, your cat is simply politely asking you if you are going to do for or with them whatever it is you usually do at that time.

What does a cat’s tail pointing down mean?

When your cat’s tail is pointing down, then you need to pay attention to how it is being held. If your cat has their tail down, but curled underneath its body, then this is a sign that your cat is afraid and that they are trying to show that they are submissive.

If, however, their tail is pointing straight down, then watch out! Cat’s do this when they feel threatened and fully intend to defend themselves or are even preparing for a pre-emptive strike.

Try backing away slowly – you might still get your legs attacked, but sometimes if you do this quickly enough your cat will relax a little and feel less compelled to prepare for an attack.

What does a slow-moving cat tail mean?

When your cat starts wagging their tail slowly back and forth, this means that they are most likely about to pounce or engaged in some sort of calculated strike. When cats do this, they are focusing on something, and readying themselves for action.

With any luck, they’ve spotted a toy, but it’s not unheard of for the target to be your legs if they are feeling particularly mischievous. Don’t punish your kitty for this – odds are its just a game to them, especially if they are young. This behavior is common and most grow out of it over time.

What does a cat’s tail pointing behind mean?

When your cat’s tail is pointing straight out, at a slight angle, then your cat is unsure about what they are looking at and considering how to proceed next.

By contrast, if they have their tail straight out, with some slight twitches, then this generally indicates that they are unconcerned about what they are viewing, but remaining alert just in case.

What does it mean when a cat’s tail Wags & Twitches?

It really depends on the context, but generally when a cat’s tail is wagging or twitching quickly back and forth, then they are either wary of something or they are preparing to greet something that they see with an aggressive response.

You’ll see this a lot when you are playing with your kitty, so this will help you to identify this behavior in the future. Swishing their tail slowly back and forth usually mean that something has caught their interest and they are about to pounce it or interact with it in another aggressive way.

What are the benefits of understanding your cat’s tail signals?

Learning your cat’s body language is vital to establishing a deep bond with your cat. It can help you to avoid nips, for one thing, when your cat is clearly telling you that they are in ‘play mode’ or annoyed, and it can also help you in keeping your kitty happy and healthy.

Why do cats flick their tails when lying down?

A lot will depend on how their tail is moving while they are laying down. Quick flicks often indicate annoyance, so if you are petting your cat or teasing them with a toy then you might want to back off a little or you might get a scratch!

If the tail is on the floor, with the tip flicking, it could signal contentment and comfort. A slow waving back and forth, with a wide-eyed focus on something in the room, means that your cat is thinking about getting up and pouncing on the subject of their focus.

Keep an eye out for these signs and you’ll have a better idea  what your cat is broadcasting while seemingly at rest.

Some cats like it, but most cats don’t like being touched at the base of their tail or on their tail at all. You can tell fairly quickly. When your cat brushes against you, lightly touch both sides of their tail, and some kitties will take this as a cue to turn around and rub against you from the other direction.

If instead, that tail starts wagging, or if your cat gets visibly annoyed and even tries to swipe at you, then you’ll know that they don’t like it and you’d better stick to scratching behind their ears and other safer, pre-approved petting areas.